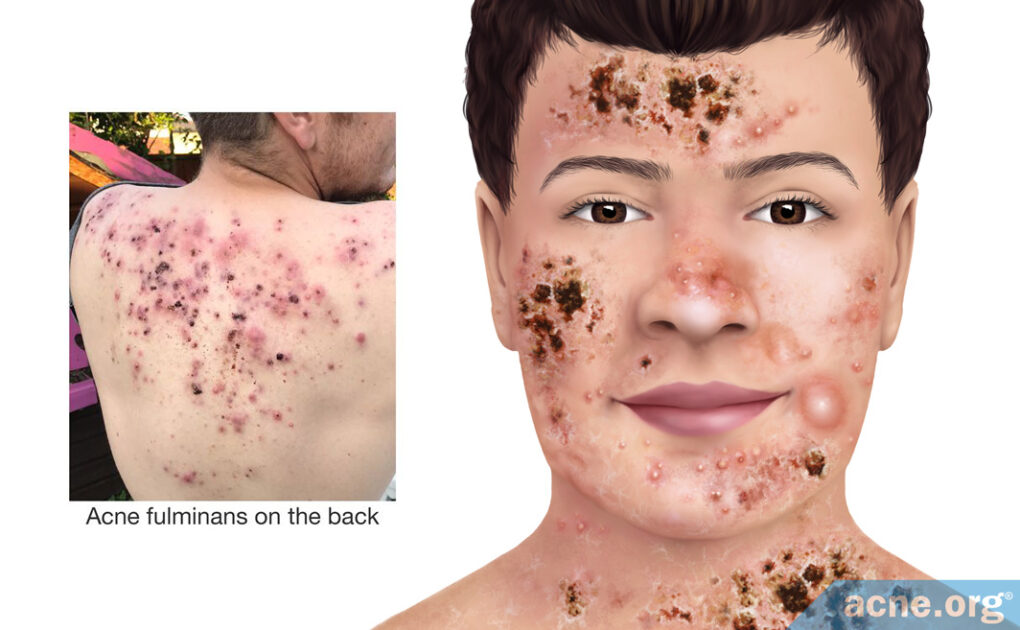 Acne fulminans is an extremely rare, severe form of acne that presents numerous painful nodules and/or cysts covering large areas of the skin along with symptoms that affect the whole body, such as fever, fatigue, and muscle pain.

Treatment normally consists of a combination of oral corticosteroids and isotretinoin (Accutane®).

Acne fulminans is an extremely rare, severe form of acne with an explosive onset that normally affects white males between 13 – 22 years old, and comes with systemic symptoms (symptoms that affect the whole body) like fever, fatigue, and pain in the muscles and joints.1,2

This type of acne falls under the umbrella term nodulocystic acne, which is used to refer to any type of acne that features large lesions (over 5mm in diameter) called nodules and/or cysts. The nodules and cysts in acne fulminans are unique in that they fill with blood and rapidly turn into open wounds called ulcers.

Acne fulminans is extremely rare. Fewer than 200 cases have been documented so far.3 The disease usually affects Caucasian males who are 13 – 22 years of age who have regular acne at first. On a few occasions, acne fulminans has been diagnosed in females.

Nobody knows what causes acne fulminans, but evidence suggests that the following three factors play a role:

Some case studies have reported on patients who started taking the oral acne medication isotretinoin for severe acne and then developed what looked like acne fulminans. These patients’ acne worsened to very severe acne with bloody lesions after isotretinoin treatment began. However, they did not develop systemic symptoms like fever and muscle pain. Therefore, some doctors call this condition pseudo-acne fulminans, which means “false acne fulminans,” and are still determining whether its treatment should be similar to “regular” acne fulminans.3,4

Acne fulminans usually occurs in individuals who have had mild-to-moderate acne for some time. The disease typically debuts in the early or middle teen years and almost never after the early twenties.

Abrupt onset: The onset of the disease is very abrupt. Typically, a person has just average, regular acne for some time, usually for a year or two, and then suddenly numerous nodules and cysts suddenly begin to emerge on large areas of the skin on the upper chest, back, neck, and face.5,6 Less severe acne lesions like whiteheads, blackheads, papules, and pustules might be present as well, but they are never a dominant feature.

Nodules and cysts: Nodules and/or cysts in acne fulminans are plentiful, and the neighboring lesions tend to merge with each other, forming extra-large lesions. Both nodules and cysts are over 5 mm in diameter and are tender and painful. The difference is that nodules are fibrous lesions that do not contain pus, whereas cysts contain “foul-smelling” pus-like material. Unlike in other forms of severe, nodulocystic acne, nodules and cysts in acne fulminans fill with blood and rapidly turn into painful ulcers (open wounds).1,5 Healing of ulcers can be extremely slow, often resulting in massive, disfiguring scars.

Systemic symptoms: Acne fulminans is a systemic disease, which means that not only is the skin affected but the rest of the body as well. The most frequent systemic symptoms include:

Scars: Scars in acne fulminans are often severe and widespread and can be atrophic (indented) or hypertrophic (raised above the skin).

Acne Fulminans vs. Other Severe Forms of Acne

Pyoderma faciale is another form of nodulocystic acne, characterized by a sudden emergence of intense redness and large merging nodules and/or cysts on the face. The disease is relatively easy to differentiate from acne fulminans because pyoderma faciale occurs exclusively in females and affects the face only.

Because acne fulminans includes skin symptoms as well as systemic symptoms, it needs to be treated by two types of doctors at the same time:

When it comes to the best course of treatment, because acne fulminans is so rare, very little clinical data is available for analysis. The only relatively large study suggested a combination of oral corticosteroids (e.g., prednisolone) and isotretinoin.2,7 Isotretinoin is a highly controversial drug that must be taken only in close supervision with a doctor and is associated with numerous hazardous health effects. Only the severity of the disease justifies the use of this treatment option.

Isotretinoin, which is the workhorse that clears the severe acne, is usually incorporated 3 – 6 weeks after corticosteroid treatment has begun, so the treatments sometimes overlap.1,7 However, some doctors prefer to start both the corticosteroid and isotretinoin at the same time.8

Despite being highly effective in treating severe acne, isotretinoin often comes with a long list of side effects and, sometimes severe, toxic reactions. This is why it is approved for use only for severe, nodulocystic acne. Some side effects may be lifelong.

The most frequent side effects include:

Toxic reactions: Possible toxic reactions associated with the administration of isotretinoin might include inflammatory bowel disease and increased intracranial (in the head) pressure that causes moderate-to-severe headaches and visual impairments, such as blurred and double vision, difficulty seeing to the side, and brief episodes of blindness.9 The incidence of these events is unknown, but they are rather uncommon.

AVOID PREGNANCY! Isotretinoin is contraindicated in pregnancy due to its severe, adverse effects on the fetus.9 In fact, it is the No.1 birth defect-causing medication on the market. Birth defects are often very severe, including death. Therefore, females are urged to obtain two (2) negative pregnancy tests prior to starting therapy. Additionally, women must use two (2) forms of contraception for 30 days both before and after treatment with isotretinoin.

Data on alternative treatment modalities for acne fulminans is limited and comes from scant case reports. On several occasions, prednisolone (a corticosteroid) was used in combination with one or another of the following drugs:1,7,10

Researchers have concluded that a combination of prednisolone and erythromycin may be a viable treatment option during the early stages of acne fulminans and cystic acne, but isotretinoin should be added to establish long-term remission.