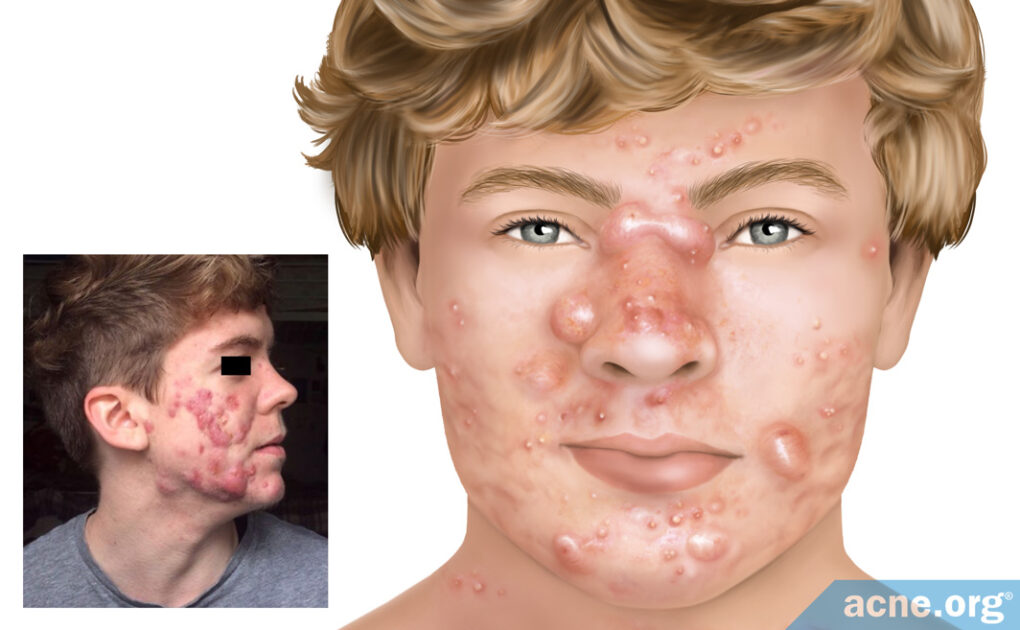 Acne Conglobata Is a Rare and Unusually Severe Form of Acne

What It Is: Acne conglobata is a severe form of acne that comes with a range of lesions, most notably nodules, cysts, blackheads, abscesses, and draining sinuses. It often leaves large, disfiguring scars. The disease typically affects young males, but females may develop it too.

Treatment: Acne conglobata is difficult to treat. The most common treatment is isotretinoin, often known by its brand name Accutane®, which is sometimes prescribed in combination with oral corticosteroids.

It falls under the umbrella term nodulocystic acne, which is used to refer to acne that features large, red, painful acne lesions called nodules and/or cysts. Acne conglobata also often comes with blackheads and lesions called draining sinuses, which are large lesions that are created when multiple cysts merge with one another.

It can develop in people with existing acne or in people who have never had a problem with acne.

Typical patients are males between 18 and 30, though females can get it as well. Lesions begin to form in the late teen years, and the disease often persists into the late twenties and, sometimes, early thirties.2 In rare cases, infants may also suffer from the disease.1

For unknown reasons, the disease is more prevalent in tropical climates.3

Nobody knows what causes acne conglobata, but the research suggests that the following four factors may play a role:

Acne conglobata is an intense form of acne that affects large areas of the skin, including the chest, back, neck, face, shoulders, limbs, and buttocks, and very often leaves massive, disfiguring scars.

It comes with a combination of lesions of all kinds, most notably nodules, cysts, blackheads, abscesses, and draining sinuses (several cysts merged together under the skin).1,2 Whiteheads, papules, and pustules may be present as well, but they are not a dominant feature.

Acne Conglobata Vs. Other Severe Forms of Acne

Acne conglobata is different from other severe forms of nodulocystic acne–acne fulminans and pyoderma faciale.

Pyoderma faciale is another dramatic form of nodulocystic acne, characterized by a sudden emergence of intense redness and large merging nodules and/or cysts on the face. The disease is relatively easy to differentiate from acne conglobata because pyoderma faciale occurs exclusively in females and affects the face only.

Acne conglobata is difficult but possible to treat. The oral medication isotretinoin is usually the go-to treatment and is normally prescribed for course of 4 – 6 months. Studies show that isotretinoin reduces the total number of lesions by 60 – 95%, on average, depending on the dose and duration of treatment.7-9 However, it must be used only under close supervision by a doctor because it is associated with a wide array of worrying side effects, some of which can be lifelong.

Isotretinoin’s effectiveness in acne conglobata treatment likely lies in its ability to reduce production of sebum (skin oil).10-12 Sebum is a crucial factor in the development of acne. In fact, individuals who do not produce sebum, such as castrated men, never experience acne.

Despite being highly effective for severe acne, isotretinoin comes with a long list of side effects and, sometimes, even severe toxic reactions. This is why isotretinoin is approved for use only for severe, nodulocystic acne.

The most frequent side effects of isotretinoin include:

Toxic reactions: Possible toxic reactions associated with the administration of isotretinoin might include inflammatory bowel disease and increased intracranial (in the head) pressure that causes moderate-to-severe headaches and visual impairments, such as blurred and double vision, difficulty seeing to the side, and brief episodes of blindness.13 The incidence of these events is unknown, but they are uncommon.

Lifelong side effects: Some side effects of isotretinoin may last forever. For instance, after taking a course of isotretinoin, the user may be left needing to regularly use lip balm for the rest of their life. In addition, because of concerns about permanent vision changes, the U.S. military will not allow anyone who has ever taken isotretinoin to be a fighter pilot.

EXTREME CAUTION! Isotretinoin is contraindicated in pregnancy due to its severe adverse effect on the fetus.13 In fact, isotretinoin is the leading birth defect-causing medication on the market. Birth defects are very severe, including death. This is why it is required that females obtain two (2) negative pregnancy tests prior to starting therapy. Additionally, females must use two (2) forms of contraception for 30 days before treatment, throughout treatment, and for 30 days after treatment with isotretinoin.

Simultaneous administration of oral corticosteroids (e.g., prednisone) in the first two to four weeks of an isotretinoin course may quickly reduce inflammation and give the treatment a head start.1

Other emerging treatments: Some preliminary research suggests that a medication used to treat autoimmune diseases like Crohn’s disease called infliximab, often known by its brand name Remicade®, might also help with acne conglobata. Infliximab suppresses the body’s immune response. Since an overactive immune response might also play a role in severe acne, it makes sense that a medication like infliximab might help. However, more research into this emerging treatment is needed.

Laser therapy, specifically carbon dioxide (CO2) laser, might also show promise for acne conglobata. In general, laser therapy is known to improve acne scars but tends to be less effective for acne. New research will show whether it can produce substantial results in acne conglobata.

Finally, external beam radiation, which is a type of radiation therapy used to treat cancer patients, might also help with acne conglobata, but at this point, we do not have enough information to say how effective it might be.4