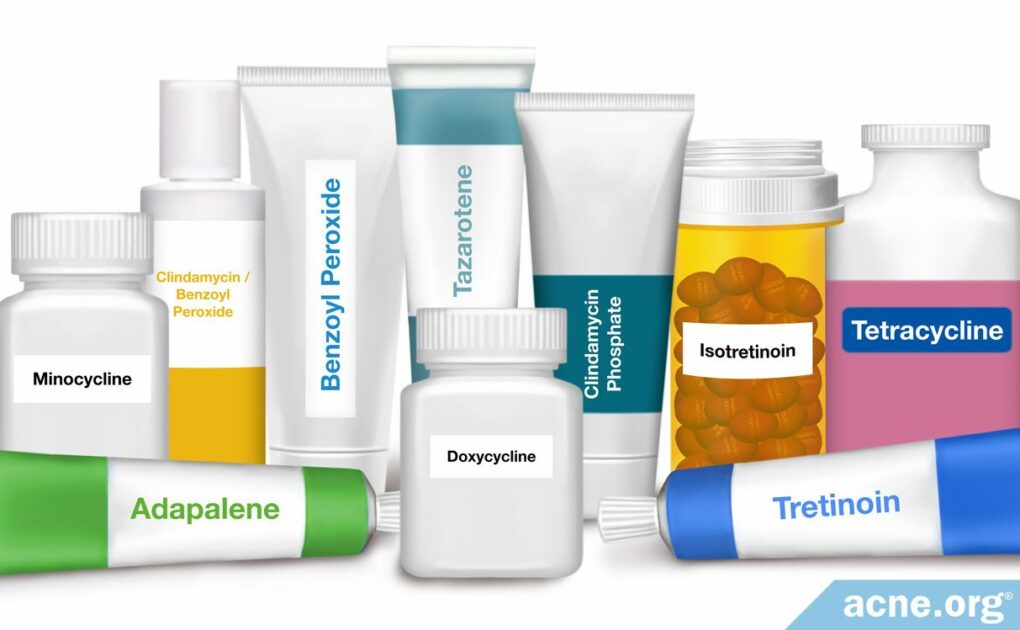 The four most frequently prescribed acne medications are:

*Isotretinoin comes with severe and potentially lifelong side effects, and is only approved for use in people with severe and scarring acne that does not respond to other treatments. However, because of its effectiveness, doctors sometimes controversially prescribe it for milder acne as well.

Be Your Own Advocate: To avoid a medication merry-go-round, do your own research in order to understand your options. Don’t simply accept any prescription your doctor advises. Arm yourself with knowledge on the available options, and ask questions. And make sure you are speaking to a dermatologist who is an expert in acne.

Several studies have looked into the question of which prescriptions are most common for acne. The most recent data comes from a 2014 study that included data from approximately 31 million patient-visits between 2005 and 2010. Here are the top 10 most commonly prescribed medications:

In this article, we will discuss in more detail the top four most commonly prescribed medications, and then consider changes that have occurred over the years in prescribing practices.

Despite providing only moderate benefit to acne, tretinoin is the single most frequently prescribed acne medication. Various treatment guidelines, such as those recommended by the American Academy of Dermatology, consider topical (applied to the skin) retinoids, such as tretinoin, to be the preferred treatment for acne, except in severe cases. Many guidelines continue to recommend topical retinoids as the first choice of treatment for mild-to-moderate acne. However, it should be noted that since retinoids like tretinoin only produce partial clearing of acne, they are almost always prescribed alongside other treatments.

Tretinoin has been one of the primary acne treatments for over 40 years, largely because of its ability to:

Isotretinoin, often known by its brand name Accutane®, is the second-most prescribed acne medication. It is a highly effective oral medication which typically is only approved for the most severe cases of acne. Patients take isotretinoin usually for 15 – 20 weeks, and in that time it successfully shrinks skin oil glands, usually permanently. Because of its long-lasting effects, it can offer long-term relief from acne symptoms in the majority of people who take an adequate dosage. In 14.6 to 52% of people, acne returns to some degree after isotretinoin treatment, but often the acne that comes back is less severe than before treatment.

Because of isotretinoin’s effectiveness, doctors increasingly prescribe it for mild-to-moderate acne as well. This practice is highly controversial because isotretinoin is such a powerful medication that it can cause severe birth defects if a patient takes it when pregnant. It also can cause severe, sometimes long-term, side effects. The FDA (U.S. Food and Drug Administration) recommends isotretinoin only for severe nodular acne.

The combination of clindamycin and benzoyl peroxide, either as a single product that combines both substances (one popular brand name is BenzaClin®) or as two separate products, is the third-most frequently prescribed acne medication. Previously it had ranked lower on the list of medications prescribed for acne. However, doctors prescribe it more frequently now because recent evidence has shown that combination treatment is more effective than either clindamycin or benzoyl peroxide alone.

Clindamycin, also known as clindamycin phosphate, is an antibiotic and is prescribed in its topical form to reduce skin inflammation. However, current guidelines recommend that topical antibiotics not be used alone and that they be used only for a maximum of three months. The reason for these restrictions is that bacteria can become resistant to antibiotics over time. It should also be noted that clindamycin does not work for everyone.

Benzoyl peroxide is a mainstay of acne treatment and works by quickly and almost completely killing acne bacteria as well as drying the skin and shedding skin cells, thus keeping pores from becoming clogged. It is available by prescription as well as over-the-counter, in up to 10% strength. One benefit of benzoyl peroxide is that bacteria cannot become resistant to it.

Minocycline is the fourth-most commonly prescribed acne medication. It is an oral antibiotic that belongs to the class of antibiotics known as tetracyclines, which are the most widely prescribed oral antibiotics for acne because of their effectiveness against acne bacteria and their anti-inflammatory effects. As with topical antibiotics, oral antibiotics should be used for a maximum of three months, and do not work for everyone. When they do work, they only provide moderate benefit, and can come with many side effects, particularly gastrointestinal discomfort.

Other oral tetracycline antibiotics exist (such as doxycycline and tetracycline), but minocycline is prescribed more often because, as is discussed in the following 2011 article in The Journal of Clinical and Aesthetic Dermatology, it may accumulate more in the skin, providing for better acne-killing properties and lowered risk of creating resistant bacteria. In addition, it may be better absorbed in the gut and have less food interactions compared with other oral tetracyclines. On a downside, it comes with more side effects, so doctors often prescribe the extended-release form of minocycline to reduce these unwanted effects.

Minocycline possesses other characteristics that make it better than other oral antibiotics:

Prescribing practices for the top 10 most frequently prescribed acne medications have changed. A comparison of data from the National Ambulatory Medical Care Survey database for the date ranges, 1989 – 2009, 2007 – 2009, and 2005 – 2010, shows us several trends: