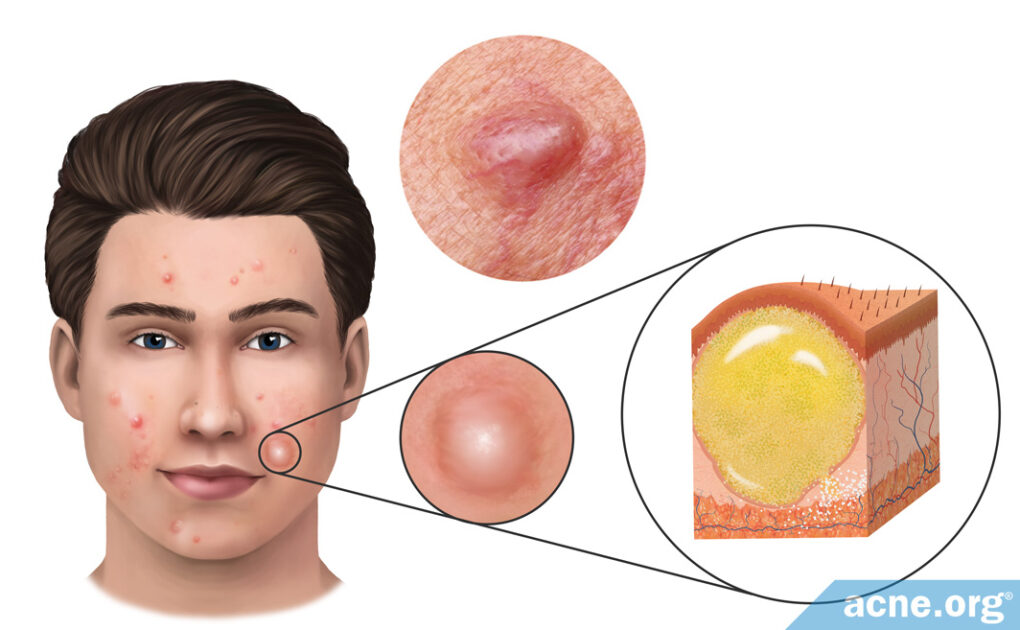 Acne cysts are very large (7 – 15 mm in diameter), skin-colored or red lesions that are filled with liquid or pus. They most often affect males in their teens and early 20s, and are part of a type of acne called “nodulocystic acne,” or more simply, “cystic acne.”

Not to be confused with a nodule: People often refer to a large acne lesion as a “cyst” when in fact most nodulocystic acne lesions are nodules. Nodules are firm, fibrous lesions that are not filled with liquid or pus and cannot be drained because there is nothing inside to come out. Acne cysts on the other hand, are soft to the touch because they have something that “fills them up.” There are two types of cysts:

Never Attempt to Pop A Cyst! You should never, under any circumstance, attempt to pop or drain a cyst on your own. It won’t work and will very likely lead to increased scarring. Always see a dermatologist for this.

An acne cyst is a severe acne lesion that occurs in people with severe acne and differs from other cysts in the body. When you hear about someone having a “cyst” somewhere on the body, these cysts are like small balls filled with liquid or air, and they contain a lining that forms a sac to hold the contents. This sac never contains pus. However, in acne, there are two types of cysts: one without pus and one with pus.

True acne cysts are smooth, skin-colored, painless bumps that appear somewhat raised above the skin and are normally between 7 and 15 millimeters in diameter. They are also called epidermoid cysts. Occasionally, one can grow up to five centimeters in diameter. Sometimes neighboring cysts may merge as well.

True acne cysts are most often found on the back, but are also found to a lesser extent on the face, neck, and earlobes.

Acne cysts have a lining that keeps the contents encapsulated. To the touch, these cysts feel soft, and movement of the cyst’s contents can be felt beneath the skin. Although you should never, under any circumstance, attempt this yourself, true acne cysts release a cheesy or waxy material that gives off a foul, rotting smell when squeezed or cut open with a scalpel by a doctor. Occasionally, a true acne cyst releases its foul-smelling contents spontaneously onto the surface of the skin. These components include fluid, dead skin cells, skin oil, some bacteria, and remnants of hairs.4

True acne cysts are stubborn acne lesions and can remain on the skin for months or years, and often leave scars.

A true acne cyst will at some point “explode” under the skin. Abscesses are lesions that form when this occurs. After the cyst rupture, the area begins to fill with pus. Pus is a white or yellow fluid consisting mostly of dead immune cells called neutrophils. As more dead neutrophils accumulate, more pus fills the burst acne cyst. Eventually, the body forms a lining around this pus to prevent it from leaking into other areas of the skin. Once an abscess forms, the overlying and neighboring skin becomes red, swollen, and painful. Like true acne cysts, abscesses often leave behind scarring.

Pseudocysts, or “fake” cysts, are deep, red, swollen, sore bumps that contain pus. They form from acne nodules that fill with pus, but do not contain the lining that true cysts or abscesses have. This pus makes pseudocysts soft, and can be felt beneath the skin when they are touched or squeezed. Pseudocysts are by far the most common form of acne cysts, and are the most common cyst in nodulocystic acne, which is a type of acne with multiple nodules and pseudocysts.1-3

Pseudocysts are most often located on the cheeks, followed by the temple region, and then the chin.5

Since they are most common, let’s first look at how pseudocysts develop.

Step 1 – Pore blockage: All acne lesions begin with microscopic hair follicles, often referred to as pores. Attached to these hair follicles are glands, called sebaceous glands, that produce skin oil, called sebum. Normally, sebum is freely expelled from the hair follicle and onto the surface of the skin. Acne develops when skin cells called keratinocytes (cells of the top layer of the epidermis) block the hair follicle, and this blockage results in sebum accumulating inside the pore.

Step 2 – Growth of C. acnes: A blocked pore contains a large accumulation of sebum, but little to no oxygen, which is the ideal environment for skin bacteria called Cutibacterium acnes (C. acnes) to reproduce.

Step 3 – Pore wall is destroyed: Small amounts of acne bacteria (C. acnes) in healthy pores are expected, but as the amount of C. acnes inside the pore increases, the body responds by sending in immune system cells called neutrophils to clear out the C. acnes and its byproducts. Neutrophils release enzymes that attack C. acnes to clear it from the clogged pore, causing the bacteria to fight back by releasing chemicals. However, these chemicals not only damage the neutrophils, but also weaken the pore wall, which eventually causes the pore to rupture.

Step 4 – Nodule formation: Papules, and pustules, commonly referred to as “pimples” or “zits,” develop when only a small portion of the wall ruptures and releases the contents of the pore only in the upper areas of the skin. Nodules develop when the rupture destroys the follicular wall, and the contents of the pore are released into much deeper areas of the skin, forming a firm, fibrous lesion that is not filled with fluid or pus.

Step 5 – Pseudocyst formation: Over the course of a few days, sometimes nodules fill with pus, and are then called pseudocysts.

Now let’s look at how a true cyst develops.

It starts in much the same way as a pseudocyst, with a clogged pore that fills with sebum, the growth of acne bacteria, and a breakage of the pore wall. However, a true acne cyst forms when the pore wall rupture only partially destroys the wall, and the body repairs the wall after the rupture. During the formation of a true cyst, there can be repeated episodes of wall rupture and reconstruction. With each rupture and rebuilding, the amount of C. acnes inside the cyst begins to decrease for an unknown reason. During each one of these rupture-and-rebuilding cycles, the wall becomes thinner. This causes the wall to become more flexible, allowing for it to stretch as it fills up with mostly dead skin cells, but also sebum, C. acnes, and remnants of hairs. These contents become the foul-smelling, cheesy/waxy material found inside of a true cyst.6-8

Never Attempt to Pop a Cyst

You should never try to pop a true acne cyst or a pseudocyst. Both types of acne cysts lie deep within the skin. Attempting to pop either acne cyst will likely result in releasing the contents of the cyst deeper into the skin. This would only make the cyst worse, and is more likely to leave scars and permanently damage the skin. Therefore, acne cysts should always be treated by a medical professional.10,11

The treatment options for true acne cysts and pseudocysts are different. Let’s start by looking at treatments for pseudocysts.

The main treatment for true acne cysts is to drain the contents of the cyst. This procedure must only be performed by a medical professional, as it involves cutting open the cyst with a needle or blade in sterile conditions and draining the cyst of its contents. This should never be attempted at home, and doing so will most likely result in a much more severe lesion and potentially radically increased scarring. Once the cyst is drained, it can heal and clear from the skin. True acne cysts should not be treated with antibiotics, isotretinoin, or hormonal therapies used for pseudocysts.11