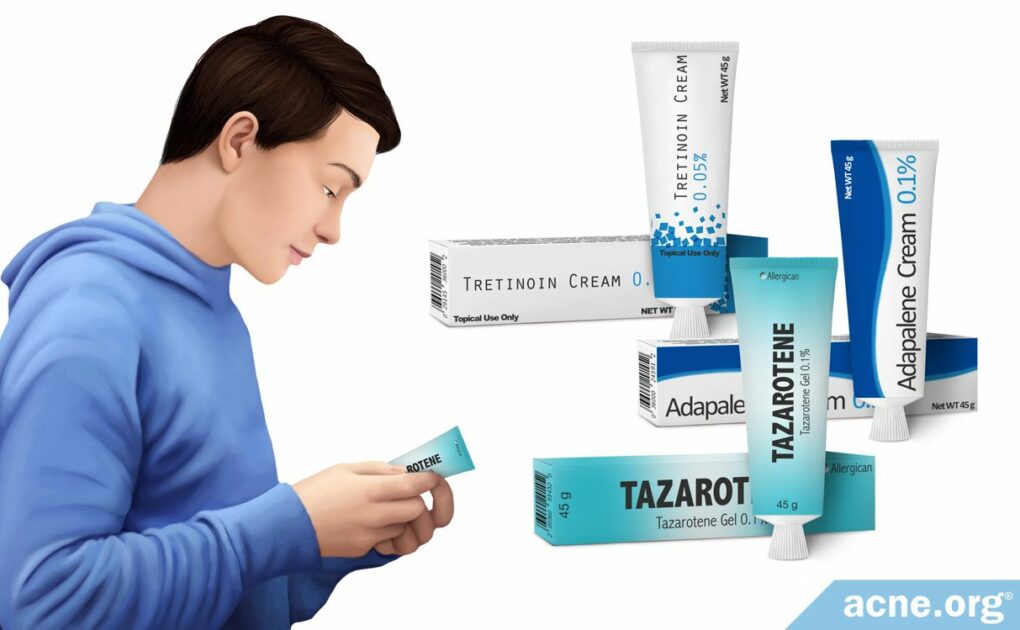 Tazarotene May Produce Slightly Better Results, But Adapalene May Be Best When Side Effects Are Taken into Consideration

There are three widely-available FDA-approved prescription topical retinoids on the market:

Which One Is Most Effective Against Acne?

No studies have yet been performed directly comparing all three retinoids at once, so we can’t say for sure. But there have been several studies that compare two of them head-to-head, so here is our best educated guess based on the data so far:

What about Side Effects?

Tolerability is also very important when it comes to choosing a topical retinoid, and we get a different view of things when we look at topical retinoids from this lens:

Tazarotene comes with the most severe side effects, Tretinoin has less, and Adapalene has even less.

The Takeaway: If you have normal or sensitive skin, adapalene might be the way to go. If you have tough skin that can withstand anything, Tazarotene might be worth a shot, but from what we can tell from studies, a majority of people find tazarotene’s side effects intolerable.

Topical retinoids are derivatives of vitamin A that treat mild-to-moderate acne. The first retinoid approved for patient use was tretinoin, which doctors began prescribing for the treatment of acne in 1971.1 Since then, scientists developed two additional retinoids in the 1990s, called adapalene and tazarotene, which are now also FDA-approved for acne treatment.2

A number of studies have been performed to examine that look at the effectiveness and side effects of tretinoin, adapalene, and tazarotene, so let’s have a look at what we can piece together.

Caution – Deep Science Ahead: To look at the topic of which retinoid is most effective and has the least side effects, we are going to get into details of a lot of studies. If you’re curious to get a “birds-eye-view” of this, just scroll through and look at the illustrations.

Effectiveness of the Three Available Retinoids

Retinoids are considered only partially effective against acne, which is why they are normally prescribed alongside other treatments. Overall, the research from several randomized controlled studies has concluded that all three retinoids reduce acne lesions by 40 – 70% in patients undergoing treatment for at least three months.3

Each of the three retinoids works via a slightly different mechanism in the skin by binding to different receptors in skin cells. As an article in the Journal of the American Academy of Dermatology states, these variances result in “slight differences in activity, tolerability, and efficacy.”4

Due to these slight differences, the FDA has approved different concentrations of each retinoid, as follows:

Since prescribed concentrations vary, this has limited researchers’ ability to definitively determine which retinoid is most effective. In addition, thus far there are no studies directly comparing all three medications at one time, so we are forced to piece together the available literature, which compares only two at a time. Let’s drill down into these studies and see what we can find. (Skip down to “Conclusion from these comparison studies” if you’d just like a quick summary.)

Scientists have performed two studies comparing the effectiveness of adapalene to tazarotene. The first found that when patients applied each retinoid daily, the treatment resulted in “comparable efficacy in reducing inflammatory and [non-inflammatory] lesion counts.”7 The second study compared 0.1% adapalene to 0.1% tazarotene in 145 patients. The scientists concluded that tazarotene was more effective than 0.1% adapalene in the reduction of acne lesions.5 Due to these conflicting reports, more studies are needed before scientists can draw a conclusion about the comparable effectiveness of adapalene and tazarotene.

Conclusion from these comparison studies

From the information currently available, it appears that:

A systematic review published in the American Journal of Clinical Dermatology in 2019 combed through 54 clinical trials on topical retinoids. The authors of the review found it difficult to rank the three topical, noting that differences in efficacy are likely minor. They wrote, “It is difficult to rank the various topical retinoids based on the limited number of comparative trials.” They also noted that choosing the right strength of medication may be even more important than choosing a particular retinoid. In general, the higher the concentration of a topical retinoid, the more effective it is against acne.8

In addition, researchers note that topical retinoids work especially well in tandem with benzoyl peroxide, so combining these two treatments into one regimen may yield even better results.8-10

Patients applying topical retinoids every day can experience side effects for the first two to three months of treatment. Common side effects include:

Generally, side effects appear within the first two to four weeks of treatment, but subside after two to three months of use.

One review compiled 34 independent studies to examine and compare side effects after tretinoin, adapalene, and tazarotene treatment. They found that all retinoids, regardless of concentration, induced some level of skin reaction during the first two to four weeks. Of the 13 studies that found a difference in tolerability between retinoids, the overall conclusion was that:

However, the other 21 studies examined in this review found no significant differences in tolerability between the topical retinoids, complicating the comparison.11

Conclusion from side effect studies

Overall, the scientific literature suggests that patients tolerate adapalene treatment best, while tazarotene is by far the least tolerated of the three retinoids. However, the concentration and type (gel, cream, etc.) of retinoid applied does affect the intensity of side effects and tolerability of treatment, and therefore should be considered when retinoids are used to treat acne.

Effectiveness of Different Vehicles for Retinoids

The three available retinoids come in different vehicle formulations, such as gels and creams. Different vehicles provide for differing levels of reduction in acne lesions and intensity of side effects.

Unfortunately, scientists have been unable to perform extensive comparisons between the different vehicles because many manufacturers do not release their comparison data. However, because tretinoin comes in a variety of known formulations, scientists have been able to study and compare the effectiveness of different tretinoin formulations, which can give us a window, albeit narrow, into what vehicle might work best and which vehicle might have the lowest side effects.

If you have normal or sensitive skin and are considering retinoid treatment, you may want to opt for adapalene. If your skin is very tough and you are one of those people who can withstand just about anything, tazarotene may ultimately be slightly more effective in reducing your acne, but be aware that even the toughest among us may find tazarotene to be challenging to handle for the first couple of months.