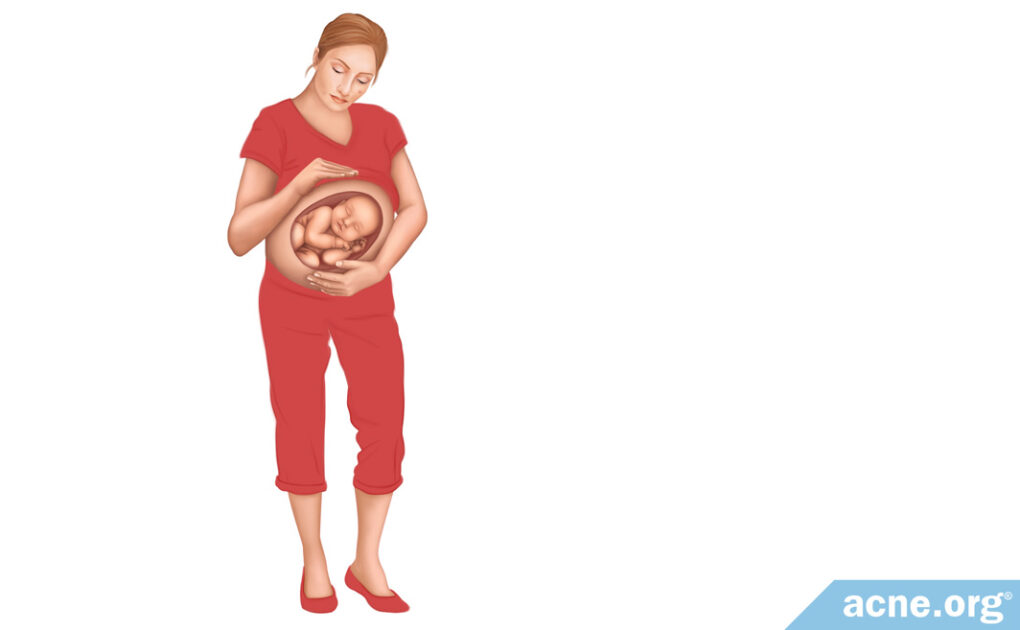 Pregnancy Usually Helps Clear the Skin, But Sometimes It Can Worsen Acne, Especially During the Third Trimester

Pregnancy increases estrogen levels, which can provide protection against acne. This is why we normally see acne symptoms decrease during pregnancy.

However, especially during the third trimester, pregnancy can also increase male hormone levels. This can have an opposite effect, and can sometimes trigger acne.

The hormonal changes that pregnancy causes in the body normally help provide a reprieve from acne. However, in some instances, women can experience a flare of acne, particularly in the third trimester.

Why does acne normally lessen during pregnancy? Levels of estrogens (female hormones that are present in both males and females) increase throughout pregnancy. In general, higher estrogen levels protect against acne.1,2

However, this is not always the case. Androgen (male hormones that are present in both males and females) levels can also sometimes increase during pregnancy, particularly during the third trimester. This can cause skin oil glands to become more active, resulting in the production of more skin oil, which may lead to a flare of acne. Because skin oil glands produce more oil during late stages of pregnancy, some women experience not only acne, but also greasy skin, especially on the face.1,3-5

In the following chart you can see how estrogen levels increase throughout pregnancy (see the red line). Increased estrogen levels may help protect against acne, and is likely why most women see their acne subside during all trimesters of pregnancy.

Most of the evidence in the scientific literature shows that acne improves during pregnancy. However, some studies show that it is possible for women to sometimes experience an increase in acne.6-10

If acne does flare during pregnancy, treatment depends on the severity of the acne. It is very important for any pregnant woman to ask her doctor before embarking on a medicated regimen.

For mild acne, a topical (applied to the skin) treatment may help. Topical treatments include:

Other alternative treatments, such as comedone extractors, which are tools that remove the material from clogged pores, and microdermabrasion (using a device to abrade away the outer layers of the skin), are safe to use during pregnancy. However, while both of these treatments might improve the appearance of skin in the short term, they do nothing to treat acne. They also both physically irritate the skin, which can bite back with breakouts in the weeks following.5

Oral retinoid medications, such as Isotretinoin (Accutane), cause severe birth defects and spontaneous abortion and therefore should never be used during pregnancy or when trying to conceive.11 Doctors are also cautious about prescribing topical retinoids (tretinoin, adapalene, tazarotene) and other prescription medications during pregnancy. Be sure to speak with your doctor before using any medication while pregnant or planning to become pregnant.