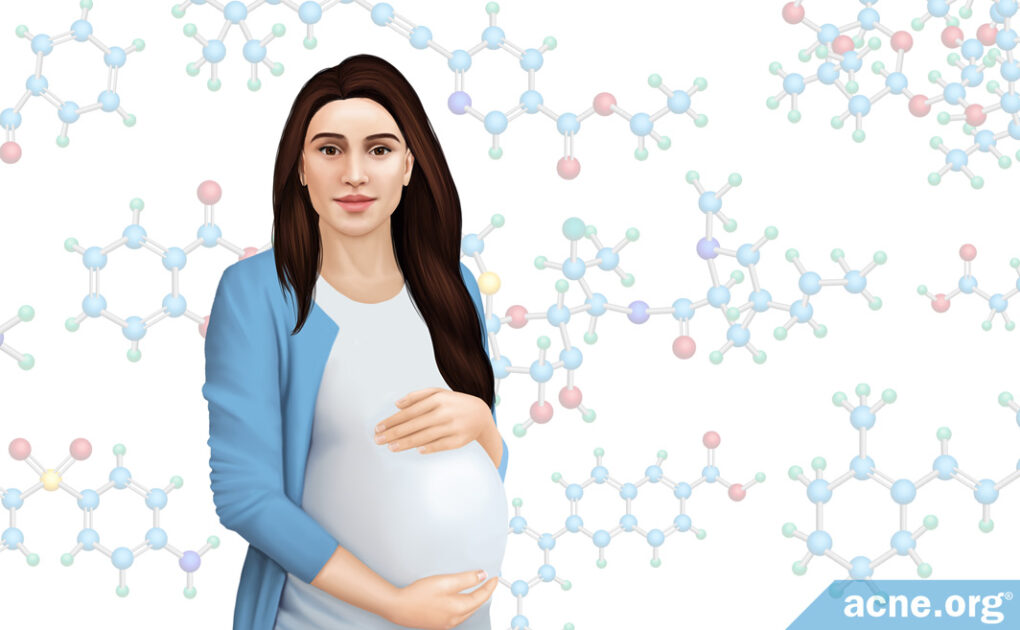 Some Medications May Be Safe, but It Is Important to Ask Your Doctor

While most women experience improved acne symptoms during pregnancy, some experience acne flares, particularly in the third trimester.

Safe Medications: Topical medications, such as benzoyl peroxide, may be safe, but it is important to discuss options with a doctor before starting any medication, whether that medication be topical or oral.

Aim for Improvement: Because of limited options during pregnancy, many experts encourage pregnant women to aim for symptom improvement rather than complete clearing of acne during pregnancy.

Always Consult Your Doctor: If you are pregnant and have acne, consult your doctor before beginning any treatment. Many acne medications carry risk to the fetus, so it is important that your doctor closely supervise your acne treatment during pregnancy. Always weigh the benefits of treatment against the risk of harming the fetus.

IMPORTANT: It is imperative to stop isotretinoin (Accutane®) treatment at least one month before becoming pregnant in order to avoid the risk of severe birth defects and miscarriage.

Understanding how to treat acne during pregnancy is difficult because, for ethical reasons, medications are not studied on pregnant women. Therefore, there is no direct scientific evidence concerning the safety of most acne medications during pregnancy.

Some common acne medications, such as isotretinoin (Accutane®) and tetracycline antibiotics, are unsafe during pregnancy.

On the other hand, some acne medications are likely safe. However, it is important to discuss these options with a doctor and to weigh the benefits of treating acne against the risks to the fetus.

First, let’s have a quick look at the effect that pregnancy has on acne. Then we will consider treatment options, along with their risks and benefits.

The Effect that Pregnancy Has on Acne

As a result of hormonal changes in the body, pregnancy has an unpredictable effect on acne. Most women experience improvement in their acne during pregnancy. However, some women experience acne flares, post-inflammatory hyperpigmentation (red/dark marks left behind after an acne lesion heals), truncal acne (acne on the chest and back), and even a first episode of acne while they are pregnant.1

According to a 2016 article in the Journal of the American Board of Family Medicine, “[M]ost treatment recommendations are based on observational and animal studies.”3

Because there is little data available, women and their doctors need to set clear goals for acne treatment during pregnancy. Some researchers recommend aiming for symptom improvement rather than complete clearing of the skin during pregnancy.4

Despite the lack of research data, the FDA has established five risk categories for medications during pregnancy (see below). While this system guides us in medication choices, the best approach is to discuss options with a doctor and tailor the treatment according to the phase of pregnancy or breastfeeding.4

Topical Treatments (Some Are Likely Safe and Some are Unsafe)

For mild-to-moderate acne, topical treatments are the preferred first choices. Even for severe acne, topical medications can be effective. It is important to note that topical medications are not without risk because in some instances they can be absorbed through the skin and into the bloodstream, especially when used on large areas of skin for a considerable amount of time.3

The following topical medications likely are safe during pregnancy:

Benzoyl Peroxide: Benzoyl peroxide [Category C] demonstrates antibacterial, pore-unclogging, and anti-inflammatory properties, which can help clear acne. Theoretically, benzoyl peroxide poses only a small risk to the fetus. While it is absorbed into the skin, the kidneys quickly remove it from the bloodstream.

According to a 2016 article in the Journal of the American Board of Family Medicine, “Benzoyl peroxide is considered safe during pregnancy.”3

Salicylic Acid: Salicylic acid [Category C] slows down shedding of the cells inside the follicles, which helps prevent clogging. It also helps break down blackheads and whiteheads. Salicylic acid is absorbed into the skin and applying it to large areas of skin can be toxic. However, risk is low during pregnancy as long as it is not used on large areas of the skin for long periods of time.

According to a 2016 article in the Journal of the American Board of Family Medicine, “Topical antibiotics have long been used for the treatment of inflammatory acne; erythromycin and clindamycin are the 2 most commonly prescribed agents. Both are classified as pregnancy category B. Short-term use of topical erythromycin and clindamycin is safe during pregnancy.”3 These medications are more effective when used along with benzoyl peroxide.

Azelaic Acid: Azelaic acid[Category B] possesses antibacterial, pore-unclogging, and mild anti-inflammatory properties. In animal studies, azelaic acid does not harm the fetus. However, there are no human studies concerning the safety of azelaic acid during pregnancy, so it is wise to be cautious when using it during pregnancy.

Niacinamide (Also Known as Nicotinamide): Niacinamide [Category not assigned by FDA] is a form of vitamin B3 and is present in our diets. Topical use of niacinamide appears to be safe. However, manufacturers advise caution during the first trimester.3

The following topical medications may not be safe and are not advised during pregnancy:

Dapsone: Dapsone[Category C] is antibacterial and anti-inflammatory. So far, there is no evidence that dapsone presents a risk to the fetus. However, it is a newer medication, and there is a lack of research concerning its safety during pregnancy. Researchers advise that women use it only when the benefits clearly outweigh the risks.3

Oral Antibiotics (Some Are Likely Safe and Some are Unsafe)

Historically, oral treatment during pregnancy generally was reserved for women who had moderate-to-severe acne that had failed to respond to topical treatment.3 However, many of these recommendations are from the 1970s. Today we have many topical treatments, such as benzoyl peroxide, which works better than any oral antibiotic and without the side effects. Regardless, let’s look at which oral treatments are suitable for pregnant women.

Oral antibiotics improve acne because they prevent the growth of acne bacteria, and they reduce inflammation. However, oral antibiotics are only somewhat effective in treating acne since they do not clear the skin.

Oral antibiotics also can come with side effects such as cramping and diarrhea.

The following oral antibiotics likely are safe during pregnancy, depending on the trimester:

The following oral antibiotics should not be taken during pregnancy:

Other Oral Treatments (Some Are Likely Safe and Some are Unsafe)

The following other oral treatments likely are safe during pregnancy:

Oral zinc is another treatment option for mild-to-moderate acne during pregnancy. Zinc may reduce the production of skin oil and is antibacterial and anti-inflammatory.

Oral zinc can be taken alone or in combination with other treatments, but the maximum amount of zinc that should be taken during pregnancy is 11 mg/day. Zinc may cause nausea and vomiting if taken on an empty stomach.2,3

Note: Topical zinc has not been shown to be effective against acne.

The following other oral treatments are unsafe during pregnancy:

Oral corticosteroids, such as prednisone [Category C], are potent medications that can treat severe acne, especially when both topical medications and oral antibiotics fail. However, research has shown that prednisone can cause severe birth defects as well as a slight increase in the risk of miscarriage. In addition, using corticosteroids repeatedly or long-term during pregnancy can cause growth failure of the fetus that results in the baby’s being born at a low weight. Therefore, oral corticosteroids should be used only for exceptionally severe acne, after the first trimester, for less than one month, and under close medical supervision.2,3

Anti-androgens, such as spironolactone [Category C], are medications that suppress androgens (male hormones that are present in both males and females). These medications can reduce skin oil production and improve acne. However, they should never be used during pregnancy because there is a risk that they cause feminization of a male fetus.2,4

Oral retinoid medications such as isotretinoin, often known by the brand name Accutane® [Category X] are contraindicated during pregnancy because they can cause miscarriage and severe birth defects. This risk is so severe that women must stop isotretinoin treatment at least one month before becoming pregnant, and many countries require women taking isotretinoin to join pregnancy prevention programs.2-4

According to a 2013 article in the American Journal of Clinical Dermatology, “Women should be aware that they should not become pregnant 1 month before, during, or for 1 month after taking isotretinoin.”2 Manufacturers have put warnings on isotretinoin labels, and both manufacturers and governments have implemented risk management programs to help women avoid pregnancy while taking isotretinoin.7 Recent studies have shown that failure to use adequate contraception is the primary reason for pregnancy during isotretinoin treatment and that compliance with pregnancy prevention programs is low.

According to a 2016 article in the Canadian Medical Association Journal, “Internationally, between 7% and 60% of female users [of isotretinoin] have been found not to use any form of contraception during treatment. As many as 80% do not use 2 methods of birth control, as recommended.”8

The following table summarizes which medications likely are safe during pregnancy and which ones are not: