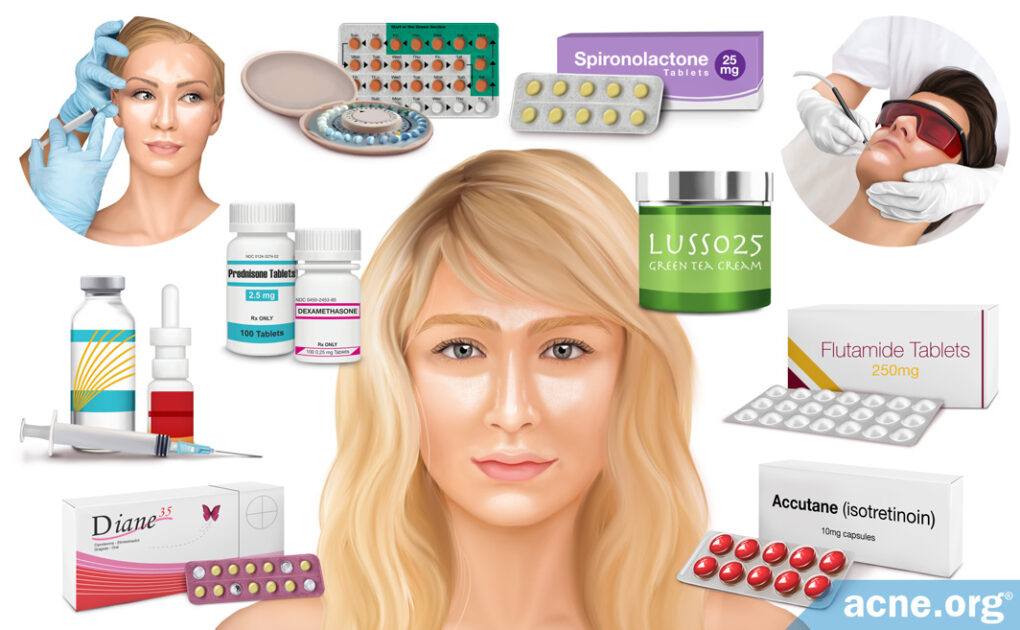 Oily skin, known by its medical name, seborrhea, is a condition caused by an increase in the production of skin oil (sebum), leaving the skin feeling greasy, looking shiny, and the pores appearing enlarged.

Seborrhea on its own is not a disease, and if it does not accompany a disease such as acne, only nonprescription treatments are recommended.

However, increased sebum production tends to go hand in hand with acne. When oily skin is present and a person also has moderate-to-severe acne, prescription treatments are an option.

What Is Seborrhea (Oily Skin) And What Causes It?

The medical term for skin oil is sebum. When the skin over-produces sebum, the condition is called seborrhea. Seborrhea is characterized by:

The primary cause of seborrhea is an increased amount of male hormones, called androgens, that are present in both males and females. However, there is some evidence pointing toward the possibility that lifestyle factors, such as excess sugar intake or high calorie consumption, may also increase skin oil production.1

Seborrhea is not a disease, and mild-to-moderate cases are normally treated only with nonprescription treatments.

Prescription Treatments: Severe Cases of Seborrhea (And When Acne Is Present)

Doctors will normally only prescribe medications to people who suffer from oily skin when it accompanies an underlying disease, such as moderate-to-severe acne.

People with oily skin are also more likely to suffer from acne, so some prescription acne treatments may be useful in the treatment of seborrhea. There are two main prescription treatments for acne that can also be used to treat oily skin:

Isotretinoin, often known by its original brand name, Accutane®, is an oral medication that doctors prescribe for people with severe acne. Isotretinoin is a powerful prescription medication that dramatically suppresses the production of sebum and reduces seborrhea. However, isotretinoin causes severe side effects and is the number one birth defect-causing medication on the market and should never be entered into lightly.

Isotretinoin is extremely effective in reducing seborrhea. A 2003 study published in the Journal of Deutsche Dermatologische Gesellschaft found that even low doses of isotretinoin cut the size of skin oil glands in half.

The researchers performed this study by providing 11 patients with various amounts of isotretinoin daily for six months and then monitoring sebum production during that time period. They concluded that even the lowest dosage of isotretinoin (2.5mg three times per week) resulted in a decrease in sebum production, skin lesions, and size of skin oil glands. In fact, isotretinoin caused the average size of skin oil glands to reduce by approximately 50%. Although this study was performed on a small number of patients, it proved that even low doses of isotretinoin can be effective in the treatment of seborrhea.2,3

Since androgens (male hormones present in both males and females) are the main driver of skin oil production, hormonal treatments that suppress androgen production can reduce sebum production, and thus, seborrhea.

Although hormonal treatments help with seborrhea, they are recommended only to women because hormonal therapies usually cause men to develop feminine characteristics like enlarged breasts.4,5

Antiandrogens are compounds that block androgens from acting as they normally would in the body, which then causes a reduction in sebum production. There are several approved oral prescription antiandrogens, including:

In women, androgens are produced in the ovaries and the adrenal glands (a gland right above the kidneys). Three treatments that can be used to block androgen production in these places, and therefore reduce sebum production, include:5

For people who do not have an underlying disease such as acne, but who are bothered by overly oily skin, nonprescription treatments are available, most notably:

Two studies have shown that daily application of topical green tea may help reduce seborrhea to some degree. Many topical over-the-counter products contain green tea extract (EGCG), but just because a product says it has green tea or EGCG in it doesn’t mean it will work. More often than not, green tea is included in products simply for “label claim,” which means it is added to the product at an extremely small amount just so the manufacturer can list it on the label. Be sure to go with a reputable brand that educates the consumer about what percentage of green tea is in the product. At least one study has shown 3% green tea extract to be effective, so it may be best to look for a product with at least 3% green tea extract.

The following two studies have shown that topical green tea can help decrease sebum to a measurable degree.

A separate 1995 study published in the journal of Biochemical and Biophysical Research Communications also found that green tea extracts suppress sebum production by inhibiting the synthesis of a male hormone called DHT. They found that the green tea compound responsible for blocking DHT synthesis is called epigallocatechin-3 gallate (EGCG).7

Electrothermolysis is a procedure that involves inserting a long, thin needle into the skin pore and zapping a small electric current into the pore repeatedly. It requires hundreds of needle injections and must be repeated multiple times over a series of months. The purpose of electrothermolysis is to damage the skin oil glands and therefore reduce sebum production. One study showed that it produced a 31.5% reduction in sebum after 4 treatments.

Going forward we may see new treatments emerge. Researchers are currently investigating new potential treatments for oily skin that show promise in lab experiments.10,11 If these treatments prove effective in clinical trials and pass safety tests, they may become available to people with seborrhea in the future.