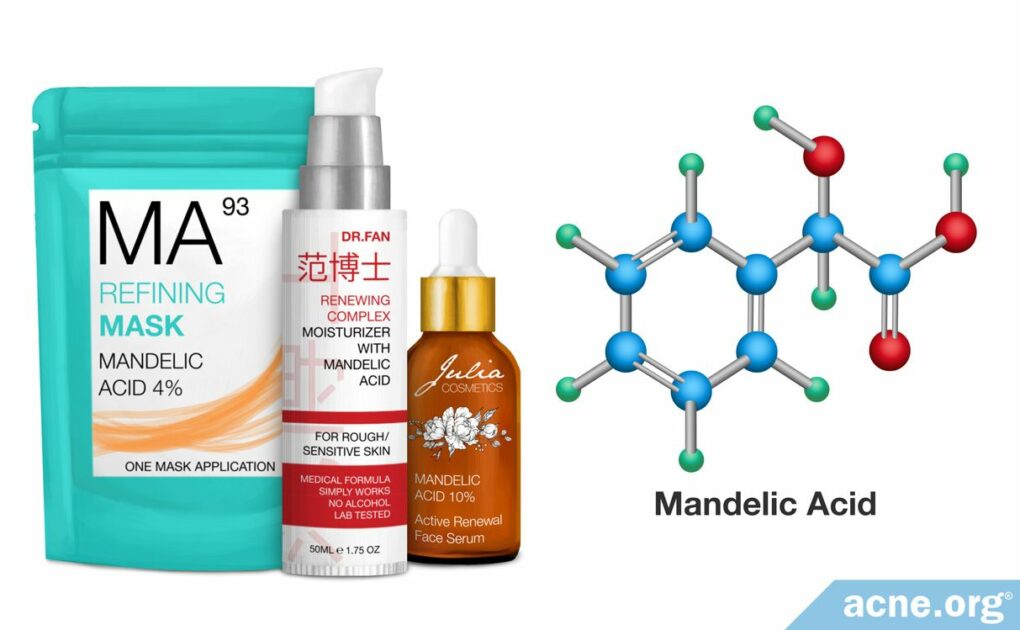 Mandelic acid is an alpha hydroxy acid (AHA), which is applied topically and may help reduce acne to a modest degree by:

What is unique about mandelic acid is that it penetrates less deeply into the skin compared with other AHAs, and is thus gentler. However, we will need more research to determine whether it works as well at clearing acne compared to other AHAs.

Like any other AHA (e.g. glycolic acid), mandelic acid will not completely clear acne on its own and should be combined with other medications, like benzoyl peroxide, for best results.

Mandelic acid is an alpha hydroxy acid (AHA), an acid that can be used to treat a variety of skin conditions, including acne.

Mandelic acid is a less common acne treatment. However, it is often found in skin care products because it has antibacterial properties and can help restore proper skin pigmentation.

Scientists have performed little research investigating the effectiveness of mandelic acid to treat acne, but because it is an AHA, it likely works to reduce acne in the same way as other AHAs, like glycolic acid or lactic acid.

Since AHAs are generally not able to clear acne completely on their own, mandelic acid would likely work best in combination with established acne treatments.1

Mandelic acid has several effects on acne and aging skin.

Mandelic acid has anti-aging properties, which means that it promotes:

The little research available on mandelic acid and acne shows that it may be able to partially clear acne. Since mandelic acid is an AHA, it acts similarly to other AHAs, and is most effective at clearing acne when used in combination with acne medications like benzoyl peroxide. However, more research is needed before its effect on acne is definitively known.