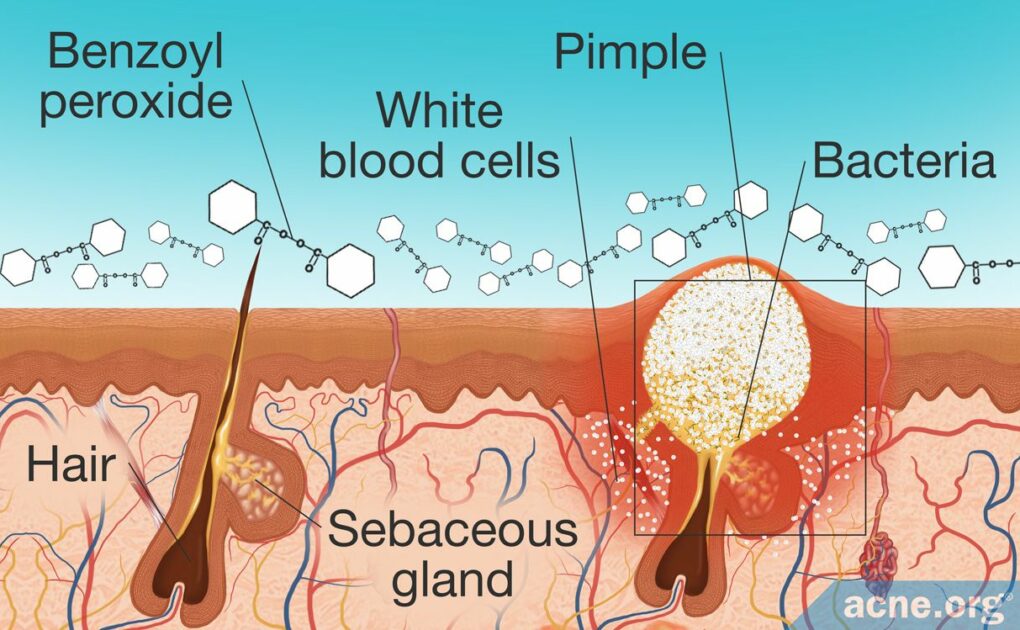 It Kills Bacteria and Unclogs Pores

Benzoyl peroxide has been used for decades in the treatment of acne and is proven to be effective.

In studies, it reduces acne lesions by 50% on average after 3 months, but when used within a proper regimen, it can completely clear the skin.

When combined with other medications, it also helps them work better.

How does it do this? Benzoyl peroxide is unique because, unlike many medications, it easily penetrates into the skin, where it breaks down into:

The side effects of benzoyl peroxide are manageable and decrease as treatment continues. Recommendations to minimize these effects are to use a lower dose (2.5% strength), start treatment with a small amount just once a day for the first week, and then begin to slowly ramp up your dosage until you are completely clear. Full instructions here.

This article delves into the nitty gritty science behind benzoyl peroxide, its chemical structure, and exactly how it works inside the skin.

Let’s start with its history. Benzoyl peroxide was first used in agriculture and industry. In 1929, physicians discovered that it could be used as a topical treatment for wounds and burns. In 1934, the researchers Lyon and Reynolds found that it was an effective treatment for a case of acne, however it was not until the 1960s that physicians began using it as a regular treatment for acne patients. Now, 60 or so years later, benzoyl peroxide is used as a main treatment for mild to moderate acne,1 and when applied correctly can even bring cases of severe acne under control.

What Exactly Is Benzoyl Peroxide?

Manufacturers derive benzoyl peroxide from coal tar. After several processes, the final product is in the form of white crystals. It is a compound made out of carbon, oxygen, and hydrogen atoms with most of the carbon atoms linked in two “benzoyl” ring structures.

Once absorbed into the skin, it breaks down into two compounds:

Action of Benzoyl Peroxide in The Skin

Penetration into the Skin

Benzoyl Peroxide does not dissolve in water but dissolves easily in fats. Thus, when applied to the skin, it easily penetrates the fatty outermost layer of the skin where it then enters the pores where acne is formed.1

Once in the skin, it breaks into its constituent parts: benzoyl radicals and benzoic acid.

Benzoyl radicals get to work fast and kill well over 99% of bacteria. Since acne is in part a bacterial disease, this is thought to be benzoyl peroxide’s main mechanism of action against acne.

Benzoic acid is thought to work similarly to salicylic acid, another well known acne treatment that helps unclog pores. Any extra benzoic acid enters the blood circulation where the kidneys then rapidly metabolize it with no known side effects.3

A Closer Look at Benzoyl Radicals

Benzoyl radicals are a special type of atom with unpaired electrons called free radicals, which create oxygen inside the skin, in a process called oxidation.

Acne bacteria cannot survive in the presence of oxygen, and when benzoyl radicals encounter these acne bacteria, the bacteria have no chance at survival and they die off.

Because benzoyl peroxide is so powerful, it not only kills bacteria, it can also deplete one of the skin’s antioxidants, α-tocopherol (a type of vitamin E), by 90% after application. This is why it’s a good idea to apply an antioxidant-containing moisturizer after using benzoyl peroxide to replenish antioxidant stores in the skin.

A 2001 study in the journal Skin Pharmacology and Applied Skin Physiology gives us some more in depth understanding:

All the Ways Benzoyl Peroxide Works for Acne

Benzoyl radicals oxidize the skin and disrupt vital biological processes in the bacteria such as DNA and protein synthesis. Benzoyl radicals kill most bacteria that live on human skin quickly and reliably.2,3

Here are some experimental results:

Keratin is a protein that accumulates within pores, causing the pore to clog.

After application of benzoyl peroxide, researchers notice more oil on the surface of patients’ skin. Benzoyl peroxide does not increase the amount of skin oil that the skin produces, but instead allows the skin oil to escape faster from the pores.

This helps with acne because the flow of skin oil can bring with it the skin cells that would normally stay put in the pore and become a clog. In a sense, benzoyl peroxide irrigates pores.

A 2007 study in the Journal of the European Academy of Dermatology and Venereology give us more detail regarding increased skin oil flow after benzoyl peroxide application:

Acne is a chronic inflammatory disease.

A few studies demonstrate the anti-inflammatory properties of benzoyl peroxide. The studies use cell cultures in the lab, however, and not real patients, so it is not certain that the results will be the same for real patients.

Combines with Other Treatments for an Enhanced Effect

Benzoyl peroxide combines with other acne treatments to produce an effect greater than the sum of the individual effects. This increase is called a synergistic effect.

However, this is not to say that benzoyl peroxide should be combined with antibiotics. Antibiotics come with serious shortcomings. The first shortcoming is that bacteria can develop resistance to antibiotics. Also, antibiotics should be used for no longer than 3 months, so they are a short-term help at best.

Still, if you are using topical antibiotics, doctors very often add benzoyl peroxide to the treatment regimen, because benzoyl peroxide kills bacteria in a way that does not allow the bacteria to develop resistance.2

The combination of benzoyl peroxide with the popular acne medications in the retinoid family (tretinoin, adapalene, and tazarotene) also creates synergistic effects. The mechanism behind this is less studied. Each medication has its own anti-inflammatory and pore-opening actions and these actions probably reinforce each other.7

Side Effects of Benzoyl Peroxide

Benzoyl peroxide has two common side effects that may cause problems for patients:

Patients may stop treatment after a few days if they experience these effects. However, when patients are aware of the potential side effects and get advice on how to minimize these effects they usually stay with the treatment long enough to see their acne clear up.1

Recent research also shows that applying vitamin E before using benzoyl peroxide decreases side effects while improving the treatment of acne, but the best method for achieving this remains to be seen.9

Patients can use this information and develop best practices to manage the side effects. Most people find that starting with a small amount of benzoyl peroxide and using it every other day is a good way to start, and researchers agree.8

Benzoyl peroxide is available in gels, aquagels, creams, lotions, and washes. Washes usually do not clear the skin as much as leave-on products like gels, creams, and lotions.

Regarding bleaching of fabrics, benzoyl peroxide should be allowed to dry before coming in contact with clothing or bed linens to prevent bleaching.3

Allergic contact dermatitis is a potentially more serious side effect of benzoyl peroxide. It is rare, occurring in only one out of every five hundred patients, but if you see swelling and/or severe crusting of the skin, this could be a sign of allergy, in which case you should immediately cease using benzoyl peroxide.3