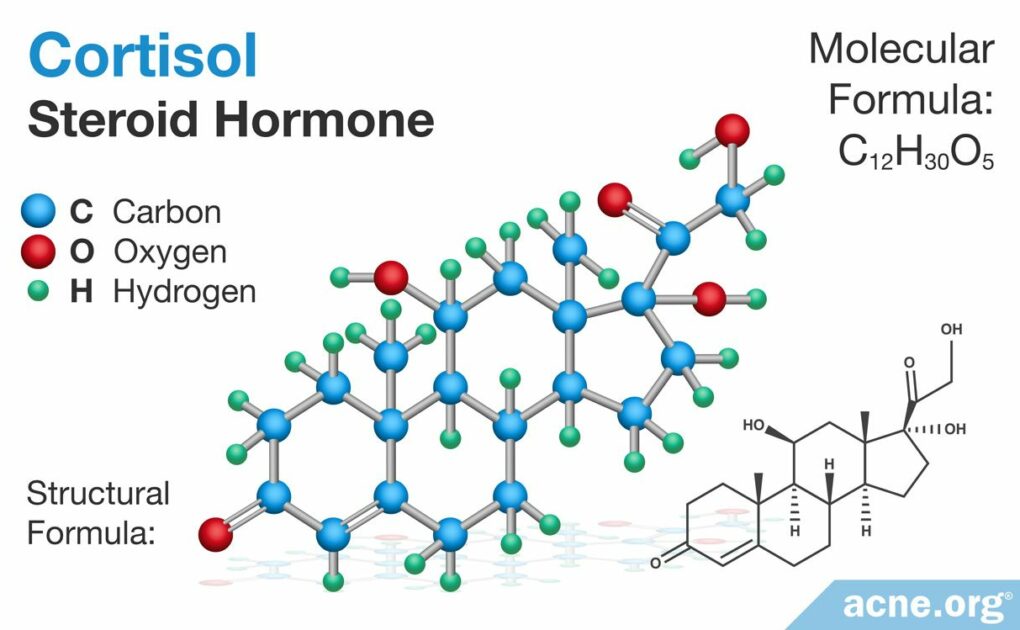 Cortisol is a steroid hormone that is present in almost every human cell and has far-reaching effects on the body. Cortisol is released in response to stress, and chronic, ongoing stress can lead to elevated levels in the body, which may worsen acne. Too little cortisone comes with its own problems in the body, so keeping cortisol balanced is important. When it comes to acne, reducing stress is the best way to balance cortisol levels.

Caution: Deep Science Ahead. This is interesting stuff, but just be forewarned that we will be diving pretty deep here.

Although acne is primarily an inflammatory disease, there are several other triggers that can worsen acne. Cortisol and inflammation play a role in each of these factors.

Each of these factors, combined with inflammation, contributes to the formation of an acne lesion. However, it is unclear which factor is the first to trigger the inflammatory response and the formation of acne. Despite this, the skin releases cortisol in response to the stress of the inflammation in the clogged pore. Cortisol then impairs the wound-healing process by slowing the production of new skin cells. Therefore, proper levels and regulation of inflammation and cortisol are crucial in all aspects of acne development, from lesion formation to wound healing.3,4

A 2000 study published in American Journal of Physiology investigated the sensitivity of IL-1 to hydrocortisone, which is a medication equivalent to cortisol produced in the body. They performed this study by treating blood cells obtained from men and from women with various concentrations of hydrocortisone. They found that the blood cells released less IL-1 in response to higher concentrations of hydrocortisone. This means that cortisol likely can inhibit the production of IL-1, which would cause an anti-inflammatory response that may decrease the inflammation inherent to acne lesions.7

A 2013 study published in British Journal of Dermatology found that sebum production is affected by glucocorticoids. Specifically, this research focused on 11β-HSD1, which is the protein that creates cortisol in the skin. The scientists found that the levels of 11β-HSD1 in the skin were higher in acne patients than in non-acne patients. This suggests that the skin of acne patients produces cortisol in higher amounts when compared to the skin of non-acne patients. This study also found that the when there were high levels of 11β-HSD1, there were high levels of sebum. This suggests that in acne patients the amount of 11β-HSD1 increases the level of cortisol, and this leads to an increase in sebum production. The researchers proposed that treating acne may be possible by creating a drug that blocks the function of 11β-HSD1. However more research is needed in order to prove this hypothesis.6

A 2009 study published in the Journal of Investigative Dermatology found that glucocorticoids can increase the amount of TLR2 produced in skin cells grown in a laboratory. If there is a larger amount of TLR2 on the surface of skin cells, then they are more sensitive to the presence of C. acnes and more likely to trigger an inflammatory response than smaller levels of C. acnes. Therefore, in this way, glucocorticoids may increase the inflammatory response characteristic of an acne lesion.8

A 2011 study published in the Journal of Biological Chemistry found that the levels of glucocorticoids are increased due to skin damage but that high levels of glucocorticoids actually decrease and slow the wound-healing process. They also found that when they artificially blocked the enzyme that creates cortisol, the production of IL-1 increased, and wound healing accelerated. In other words, when an acne lesions forms, IL-1 is produced, and this stimulates inflammation and the wound-healing process. But upon the release of cortisol, wound healing slows.9

Another study, published in 2016 in the Archives of General Psychiatry, found that mental stress also increased cortisol, which slowed wound healing. To perform this study, the researchers made wounds in the forearms of 36 women and monitored the levels of glucocorticoids and how fast the forearm wounds healed. Women who healed slowest were those who were most stressed, had the highest levels of cortisol, and had the lowest levels of IL-1.10 Although this study focused on metal stress and wound healing instead of acne lesions and wound healing, it is clear that glucocorticoids slow the wound-healing process and therefore likely would slow the healing of an acne lesion.

Clearly, the effect of glucocorticoids on acne is complex. Some factors, such as IL-1 reduction, may improve acne, while others, such as the effect of sebum production, response to C. acnes, and influence on wound healing, may worsen acne. However, it is clear that improper levels of glucocorticoids, including cortisol, can cause a variety of effects on the skin that may worsen acne.

One common treatment for severe acne is isotretinoin, otherwise known as Accutane®. Isotretinoin, although effective in treating some types of acne, comes with severe side effects, one of which is causing birth defects. It is unclear exactly how isotretinoin treats acne, but we do know that it dramatically and often permanently decreases sebum production.

A 2011 study published in Acta Dermato-Venereologica sought to understand how isotretinoin affects the production of hormones, including cortisol. After three months of isotretinoin treatment, the researchers observed an average decrease in cortisol levels from 13.1 to 11 in the 47 acne patients participating in the study.11

A second study, published in 2015 in Dermatology, found that after three months of isotretinoin treatment, the levels of cortisol decreased on average from 15.0 to 11.8 in the 105 acne patients participating in the study.12 The researchers proposed that isotretinoin decreases glucocorticoid levels, which may improve acne.

In the skin, cortisol regulates inflammation. Acne is an inflammatory disease, so cortisol is important in the formation and healing of acne lesions. Research has found that glucocorticoids, including cortisol, affect the factors involved in acne development, sometimes for the better and sometimes for the worse. These include regulating IL-1-induced inflammation, sebum (skin oil) production, C. acnes growth and inflammation, and wound healing. Because of cortisol’s skin function complexity, scientists are unable to determine how improper cortisol levels worsen or improve acne. However, it is clear that abnormally high or low cortisol levels can result in inflammation, which is harmful if misregulated. Overall, more research is needed in order to identify how cortisol and other glucocorticoids affect acne and potential treatments, which would target improper glucocorticoids levels.