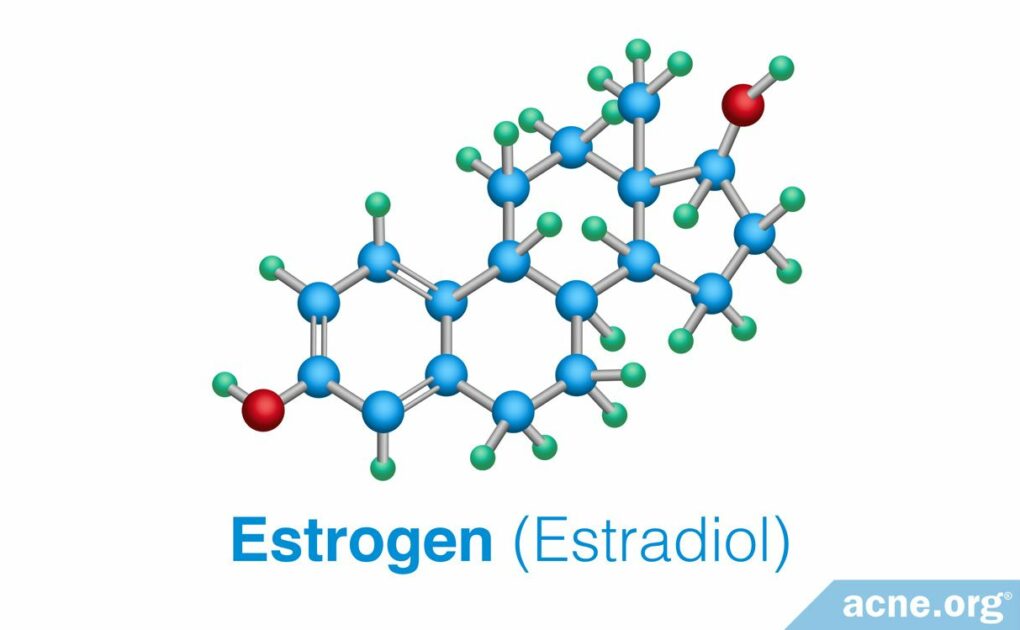 In Both Males and Females, Estrogens Improve Acne by Decreasing the Production of Skin Oil

Both males and females produce female hormones, called estrogens. Estrogens counteract the effects of male hormones in the body, thereby decreasing the production of skin oil and reducing acne.

Birth control pills containing estrogens can be used to treat acne in females and produce on average a 60% reduction in acne after 6 momths, but come with side effects.

Estrogens are female sex hormones. Although they are female hormones, they are also produced in males in smaller amounts. There is actually no single hormone called “estrogen.” Instead, estrogens are a class of closely related hormones with similar names.

Role of Estrogens in the Body

In females, estrogens are responsible for:

In both males and females, estrogens:

The four main estrogens include:

These estrogens are present in both males and females, with the exception of estetrol.

Scientists do not fully understand how the body controls the balance between androgens and estrogens. However, this balance is critical for overall health as well as specifically for skin health.3

Researchers and doctors have long recognized that estrogens appear to improve acne. For example, in females, acne tends to occur when the levels of estrogens in the blood are low.

An overview article on the role of hormones in acne, published in 2011 in the journal Clinical Biochemistry, noted that in many cases, females with acne possess low estrogen levels:

Since high estrogen levels tend to decrease acne, medications that contain estrogen can be used as an acne treatment. Estrogen therapy usually comes in the form of oral contraceptives (birth control pills), which reduce acne on average by 60% after 6 months.

For males, estrogen therapy is not an option because of unwanted side effects, such as gynecomastia (enlarged breasts) and sexual dysfunction.

One large study published in 2012 combined and analyzed the results of many earlier studies with a total of over 12,000 participants. The researchers concluded that the findings of all the studies agree that oral contraceptives can reduce acne and that all the combined oral contraceptives were effective in reducing acne, regardless of the particular synthetic estrogen each contained.5

Side effects: However, it is important to keep in mind that oral contraceptives cause moderate to potentially serious side effects, such as increased risk of blood clots, stroke, and heart attack, especially in women over 30 years old who smoke. Some people may also be at increased risk of developing venous thromboembolism (a blood clot in a vein). It is a good idea to speak with your doctor about any family history of blood clots before beginning hormonal therapy for acne. Because of the potential side effects, oral contraceptives are usually only prescribed for acne when other treatments, like benzoyl peroxide and/or retinoids, fail.

The Science: How Estrogens Decrease Acne

Estrogens improve acne in both males and females by counteracting the effects of androgens, which tend to worsen acne.7

To understand how estrogens relieve acne, we first need to understand the effects of androgens on acne. Androgens, such as testosterone, signal skin oil-producing glands, called sebaceous glands, to produce more skin oil, called sebum. Androgens from the blood do this by binding to the cells of the sebaceous glands, called sebocytes. Inside these cells, the androgens then head for the nucleus, which is the so-called “control center” of each cell. The nucleus contains the cell’s genetic material, which is the biological instructions telling the cell what to do and how to grow. When androgens penetrate the nucleus of a sebocyte, they “turn on” specific genes that “tell” the cell to start synthesizing more sebum. In other words, increased androgen levels in the blood results in more androgens interacting with sebaceous glands, causing an increase in sebum.8

On the other hand, estrogens have the opposite effect, meaning that they decrease sebum production in both males and females.

Scientists speculate that estrogens achieve a decrease in sebum by one of three mechanisms.

Besides reducing the amount of sebum, estrogens also reduce inflammation – in other words, they reduce the redness, swelling, and soreness that come with acne breakouts.4 Thus, estrogen not only helps to prevent the first step in acne development, but helps to relieve the symptoms of acne as well.

Because of the multiple ways estrogens can work against acne, combined oral contraceptives that contain estrogen can be a good choice for long-term treatment in some women with acne. For best results, doctors should prescribe estrogen therapy together with topical treatments that attack acne on other fronts. Such topical treatments can include benzoyl peroxide, topical retinoids (tretinoin, adapalene, tazarotene), and/or azelaic acid.10

Some females have an excess of androgens due to a hormonal condition called polycystic ovary syndrome (PCOS), characterized by acne, excessive hair growth, and menstrual irregularities. For females who suffer from acne due to PCOS, research shows that estrogen therapy can be a good treatment option.11-15 If you are a female who experiences these symptoms, be sure to see a doctor for a proper diagnosis.

Estrogens can improve acne by reducing the production of sebum and relieving the symptoms of breakouts. Oral contraceptives containing estrogen have been shown to be effective in treating acne in females, but they come with potentially serious risks. Estrogen therapy for acne is not available for males because of undesirable side effects.