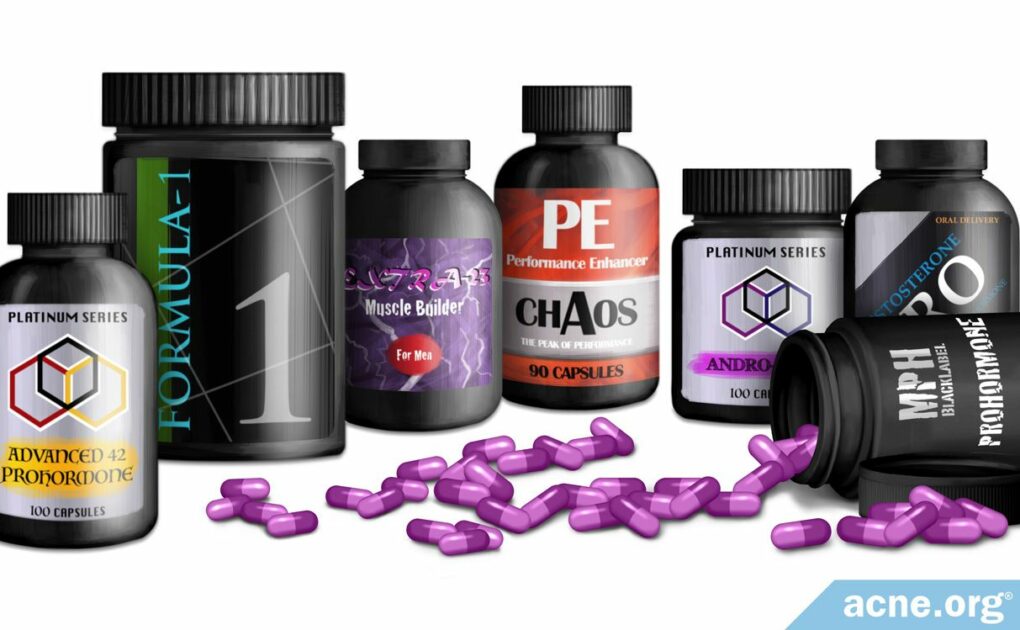 Yes, It Is Likely, and They Don’t Help With Muscle Size and Strength

In an attempt to provide similar “steroid-like results” in an over-the-counter supplement, the fitness supplement industry introduced “prohormone” supplements. If these supplements did work as advertised, which–spoiler alert–they don’t, that would mean they would increase levels of testosterone in the body just like anabolic steroids. And in turn, that would mean people who take prohormone supplements would experience more acne because increased testosterone levels normally means acne.

However, there is no evidence that they have any real effect on testosterone levels in the body. This might lead one to believe that prohormones, while a waste of money, at least do not lead to more acne, but that is not necessarily the case.

Here’s why: First, it’s important to know that prohormones are not just in supplements. We all naturally have them in our bodies. And based on published research, people with acne have much higher levels of natural prohormones in their bodies when compared with people with clear skin. In other words, prohormones might not need to convert to testosterone to wreak havoc on the skin. The prohormones themselves may increase skin oil production, and more skin oil normally means more acne.

The three main prohormones sold are:

The Bottom Line: At this time, there are no studies directly examining prohormones’ effect on acne, and therefore scientists will need to perform more studies before such conclusions can be drawn, but since they do not work for muscle gain or increased sports performance, and some evidence shows us they may lead to increased skin oil production and more acne, it is best to save your money.

Prohormones naturally exist in our bodies as weak hormones that undergo a series of chemical transformations to become stronger hormones. Both prohormones and hormones can have effects on the body, but the effects of prohormones are generally weaker than those of hormones.

Prohormone supplements in the fitness and bodybuilding world are marketed as precursors of the hormone testosterone, which is a male steroid hormone that is found in both males and females that can lead to increased muscle growth and sports performance.

This creates concern in acne-prone people because increased levels of testosterone lead to an increase in skin oil production1-6, and thus, more acne.

However, as we will also see, not only do prohormones not deliver on their promise of converting into testosterone, they still may worsen acne because prohormones themselves may stimulate more skin oil production, which could lead to more acne.2

In short, there is no reason to use prohormone supplements. They don’t work to increase muscle gain or sports performance, and could potentially make your acne worse.

There are three main prohormones that have historically been included in fitness supplements:

Before 2004, these prohormones were considered harmless, and were available over-the-counter in the United States. However, after extensive research and debate, the medical community recognized the health hazards of testosterone prohormones, and Congress enacted the Anabolic Steroid Control Act of 2004. This act prohibited the over-the-counter sale of androstenedione and androstenediol in the United States. Although DHEA remained legal in the U.S., it was banned from use in competitive sports. This ban was implemented despite a lack of scientific evidence to support the idea that prohormone usage has any effect on muscle size or strength.

Prohormone Supplements – Fail to Convert into Testosterone, but Still Cause Side Effects

When taken orally, the three prohormones found in fitness supplements, DHEA, androstenedione, and androstenediol, undergo a series of chemical reactions, and a small percentage of these prohormones are converted into testosterone. However, the amount of testosterone produced remains in the body only in the short term and is not enough to enhance body composition or sports performance. To make matters worse, this short term increase in testosterone can still lead to unwanted side effects. Specifically, prohormones may end up increasing unwanted female hormones, which can lead to breast growth and breast tenderness in men.7

Prohormones May Lead to More Acne

Since oral prohormones only cause a small and short-term increase in testosterone, it makes common sense that they would not cause an increase in skin oil and more acne.

However, research shows us that the following two prohormones may not need to convert into testosterone to still increase the production of skin oil, and ultimately lead to more acne:

This is confirmed by two studies that have found that higher levels of these prohormones tend to mean more acne for both men and women.10,11

This begs the question: If you take DHEA or androstenedione orally in supplements, will this lead to more prohormones in your body, which will lead to more skin oil production and more acne? We will need to see research performed on this specifically to confirm whether this is the case.

Natural/Herbal Testosterone Boosters Most Likely Do Not Lead to Acne

In addition to prohormones, several natural, herbal supplements have also been marketed as testosterone boosters. These alternatives include substances from plants like Tribulus terrestris, Tinospora cordifolia, and fenugreek.

There is no evidence to support the idea that orally administered prohormones have any considerable or long-term effect on testosterone levels in the body. However, prohormones found naturally in the body are present in much higher levels in acne patients than in healthy individuals. Therefore, any effect prohormones may have on acne is likely due to an inherent ability of prohormones to increase skin oil production directly and not due to conversion into testosterone. Whether taking these prohormones would increase their levels in the body, potentially causing acne, is still unknown.

So, from the evidence we have, since prohormone supplements do not deliver on their promises, may cause unwanted side effects like breast growth or tenderness in men, and may lead to increased skin oil production and more acne, it seems clear that it is best to avoid taking them.