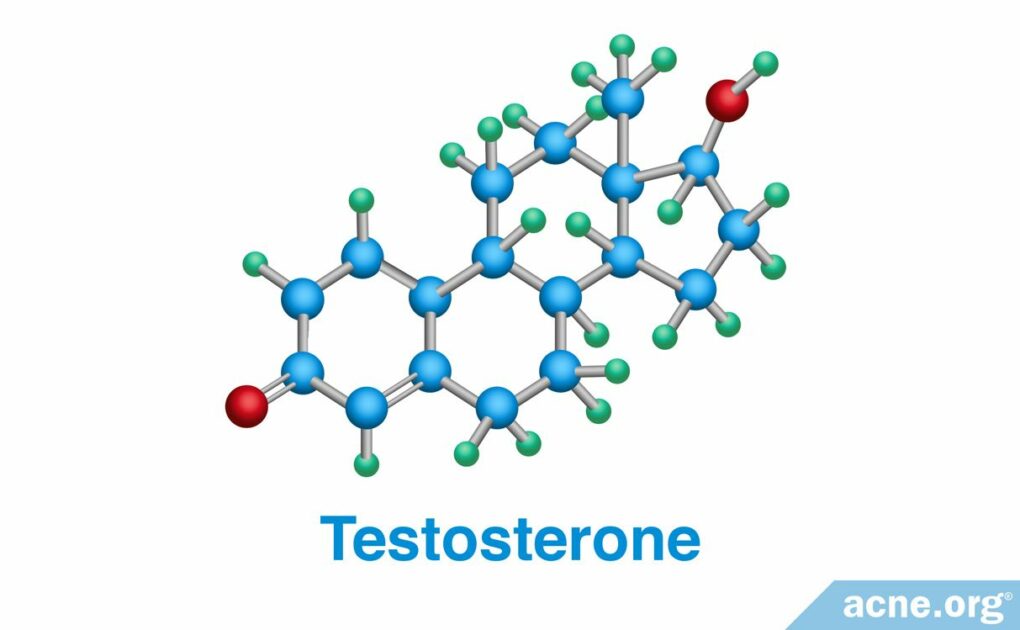 In Both Males and Females, Testosterone and Other Male Hormones Increase Acne by Stimulating the Skin to Produce More Sebum (Skin Oil)

Even though testosterone is a “male hormone,” it is present in both males and females, and is central to the development of acne in both sexes.

What Can Be Done About It? If you’re female, birth control pills and androgen receptor blockers (anti-androgens) can both work to combat androgens in the body and reduce acne, but come with potential side effects. If you are male, there is not much you can do because these treatments can lead to feminizing symptoms such as enlarged breasts (gynecomastia), as well as sexual dysfunction.

The word “androgen” comes from two Greek words, which can be roughly translated as “male maker” because in males, testosterone and other androgens begin influencing a male baby’s development before he is born and continue to regulate his body throughout his life. They also control the development and activity of the male sex organs as well as the development of secondary male characteristics, such as facial hair and the Adam’s apple.

But androgens are not only “male makers.” In both males and females, testosterone also regulates muscle growth, bone formation, and sex drive.1

Where in the Body Are Testosterone and Other Androgens Produced?

In both males and females, androgens are produced in the:

The pituitary gland, which is found at the base of the brain, controls the production of androgens. When it sends a signal to the sex organs and/or adrenal glands, they begin producing androgens and releasing them into the blood.2

Androgens found in both males and females include (listed from least potent to most potent):

Testosterone is the primary and best-known androgen. It is called a “steroid” hormone because of its chemical structure, which is closely related to the anabolic steroids, which some people take in order to build muscle mass.

Several studies have clearly shown that increased levels of androgens, including testosterone, are linked to an increase in acne in both males and females.5-8

The Science: How Androgens Cause Acne

Testosterone may also lead to an overgrowth of skin cells, which may lead to clogged pores.

Acne typically begins at puberty, which is when androgen levels rise in both males and females. Not coincidentally, this is also when sebum begins to be produced in a greater amount.

Free testosterone and other androgens from the blood can enter the cells of the skin oil glands, which are highly sensitive to androgens. Inside these cells, called sebocytes, the androgens head for the nucleus, which is the so-called “control center” of each cell. The nucleus contains the cell’s genes, which comprise the biological information instructing the cell what to do and how to grow. When androgens like testosterone enter the nucleus of a sebocyte, they “turn on” genes that “tell” the cell to start synthesizing more sebum.

Although all androgens can cause increased sebum production, DHEA-S – which is the weakest androgen – actually seems to correlate most strongly with acne. Sebum-producing glands in acne patients contain more DHEA-S than any other androgen,3 and research suggests that an increase in DHEA-S tends to go hand-in-hand with the early stages of acne. The reasons for this are currently not well understood.2

Sensitivity to Androgens May also Contribute to Acne

As we have seen, research suggests that testosterone correlates strongly with acne. However, more acne does not always mean there is increased testosterone. Instead, some people may simply be more sensitive to testosterone.

According to an article published in the German scientific journal Journal der Deutschen Dermatologischen Gesellschaft in 2007, most patients whose skin produces too much sebum actually have normal levels of androgens in their blood. The scientists speculate that some people’s sebum-producing glands may be unusually sensitive to androgens, so that even normal amounts of testosterone can trigger acne.3

These treatments are not used for treating acne in males because they produce unwanted side effects, such as gynecomastia (enlarged breasts) and sexual dysfunction.

Both birth control pills and androgen receptor blockers can help with other androgen-related health problems besides acne. In women, chronically high levels of androgens, a condition known as hyperandrogenism, can lead to serious health effects like type 2 diabetes, polycystic ovary syndrome (PCOS), and others. Around the world, about 5-10% of females of childbearing age suffer from hyperandrogenism.10-12 If you are experiencing acne along with other symptoms like menstrual irregularities and/or excessive hair growth, be sure to see your doctor for a proper diagnosis.