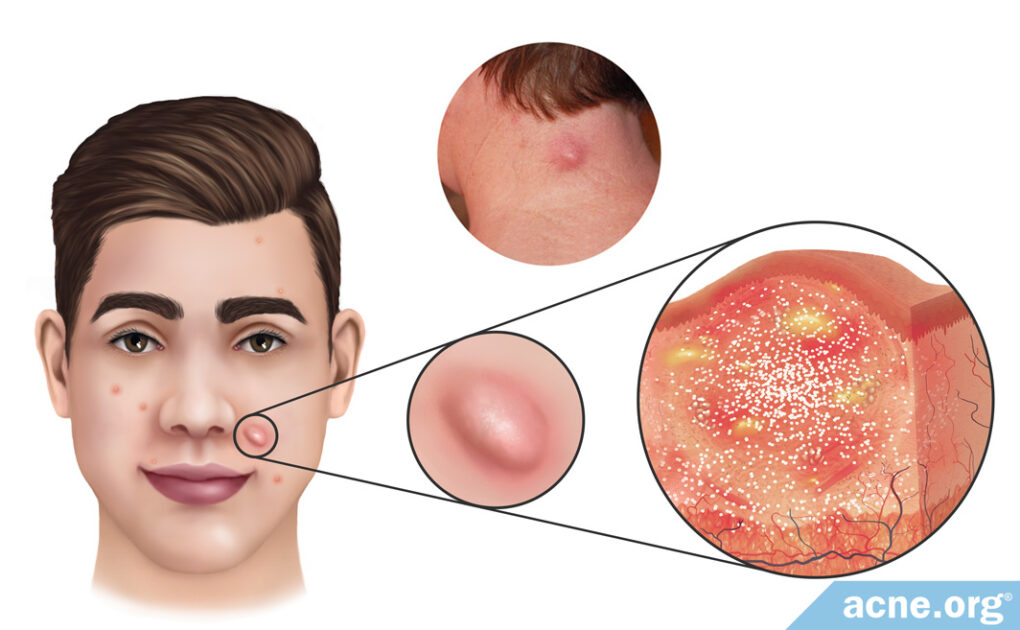 Acne nodules are large (over 5 mm in diameter), red, painful bumps that form after a skin pore ruptures and expels its contents deep into the skin. They are fibrous lesions that do not contain pus and are part of a kind of severe acne called “nodulocystic” acne, often simply referred to as “cystic acne.”

Do Not Attempt to Pop! Popping nodules is pointless because they are solid. Attempting to pop a nodule can damage the skin, leading to more inflammation and scarring. Never attempt to pop a nodule.

Nodules are large (over 5mm across), inflamed, red, painful, large bumps that form deep in the skin. They occur most often on the back, chest, back of the neck, and face.

Nodules are a hallmark of nodulocystic acne, often simply referred to as “cystic acne,” which comes with both nodules and cysts. Both of these lesions can look similar on the surface of the skin, but are distinct types of lesions.

If untreated, nodules are stubborn and can remain on the skin for weeks or months and are likely to leave permanent scars.1

Step 1 – Pore blockage: All acne lesions begin with microscopic hair follicles (pores) in the skin. Attached to these pores are glands called sebaceous glands, which produce sebum (skin oil). Normally, sebum is freely expelled from the pore and onto the surface of the skin. Acne begins to develop when the pore is blocked by skin cells, and this blockage results in sebum accumulating inside the pore.

Step 2 – Formation of a comedone: As sebum begins to accumulate inside the pore, the pore becomes visible. The visible sebum-filled pore is called a comedone, which is more commonly known as a whitehead or blackhead.

Step 3 – Pore wall is destroyed: A comedone contains a large accumulation of sebum, which is the ideal environment for a strain of skin bacteria called Cutibacterium acnes (C. acnes). This bacteria feeds on the sebum inside of the pore and begins to reproduce rapidly. C. acnes lives on everyone’s skin, and a small amount is expected in skin pores, but as the amount inside the pore increases, the body views it as an infection and responds by sending in inflammatory cells called neutrophils. Neutrophils release enzymes that attack C. acnes to clear them from the clogged pore. This weakens the walls of the pore, and can cause the walls to burst, releasing its contents (sebum, neutrophils, bacteria, and dead skin cells) into the surrounding skin.2

Step 4 – Nodule formation: Nodules form when the pore wall is completely destroyed. The complete destruction of the pore wall results in the release of the pore’s contents into deep areas of the skin. Due to the severity of the rupture, the body responds with a large amount of inflammation, which causes a large nodule to form.

Without adequate treatment, a nodule can take weeks or even months to resolve and often leave atrophic (indented) or hypertrophic (raised) scars.3,4 For example, one study found that 70% of untreated acne nodules on the back evolved into atrophic scars over the course of a month.5

Five main factors are believed to be involved:

You should never try to pop an acne nodule because they are fibrous lesions that do not contain pus. No matter how hard a nodule is squeezed, nothing will be expelled. Attempting to pop one will cause more harm to the skin by damaging it further, increasing the risk of infection, likely worsening the nodule, and increasing the risk of scarring.

Instead, acne nodules should be treated with one of the following therapies:8

The injection of steroids directly into the acne nodule almost immediately reduces inflammation and helps to heal the lesion and prevent scarring. These shots are effective at clearing one nodule or a few nodules, but are not a feasible treatment option for people with numerous and widespread nodules.

To prevent future nodules, treating the skin gently and applying benzoyl peroxide correctly can halt the development of any type of acne lesion, including nodules

Isotretinoin is an oral medication that is approved only for the treatment of severe acne. It is powerful and effective, but it permanently and irreversibly changes the entire body, including the skin, and comes with many side effects, some of which can be lifelong. When nodules and/or cysts are numerous, severe, widespread, and deeply scarring, doctors sometimes advise its use.

In especially severe cases, isotretinoin is sometimes prescribed alongside oral corticosteroids. Doctors usually prescribe corticosteroids for the first 2 – 4 weeks of treatment because they work much faster than isotretinoin and can quickly decrease inflammation, redness, and pain. A few weeks into the treatment, the patient normally begins taking an isotretinoin dosage of 0.5 – 1 milligram/kilogram/day for four to six months.

For proper absorption into the blood, isotretinoin must be taken with a high-fat meal (≥ 20g of fat). Patients who take isotretinoin without following this instruction may find that their acne initially improves but then returns.9

Antibiotics, including tetracycline, minocycline, and doxycycline, are alternatives to isotretinoin that can temporarily reduce acne nodules in some people. Oral antibiotics can be taken for up to three months. Once the treatment is stopped, nodules will likely return.

Oral antibiotics can also cause side effects, including gastrointestinal issues, and in rare cases can permanently stain the teeth and/or skin. Further, they should never be taken with isotretinoin as there is a risk of developing a disease called pseudotumor cerebri, which is a buildup of pressure inside the skull.10

Cryotherapy, or cold therapy, is a procedure performed by quickly freezing the nodule with special cooling agents for around 20 seconds.

A 1974 study published in the British Journal of Dermatology analyzed the effectiveness of cryotherapy on 25 acne patients with acne conglobata, which is a rare, especially severe form of nodulocystic acne. They found that cryotherapy resulted in clearance of most nodules within 10 days of treatment. However, this technique has only been studied on particularly severe nodulocystic acne and should not be a first-line therapy. Further, this treatment option only provides superficial clearing of acne nodules and does not treat the underlying cause, meaning that it is likely that more nodules will develop.11

One less common treatment for acne nodules is photodynamic therapy. This therapy is performed by treating the skin with a sensitizing agent followed by illumination of the skin with light, usually red light. There is little research on the effectiveness of this treatment option, so until scientists perform more research, we will not know if it should be used as a primary therapy for nodulocystic acne.

The therapies mentioned above are sometimes combined to treat nodulocystic acne. One common combination that doctors often prescribe for acne patients with only a few nodules is a combination of oral antibiotics, conventional topical therapies such as benzoyl peroxide or retinoids (tretinoin, adapalene, or tazarotene), and intralesional shots (cortisone shots).12 This combination is controversial, however, since oral antibiotics have major drawbacks. For instance, even when they do work, oral antibiotics provide only temporary relief for three to six months, are only somewhat effective, and come with side effects. For these reasons, oral antibiotics are falling out of favor with both patients and physicians when it comes to treating acne. But the point is that multiple therapies are sometimes combined for best results.