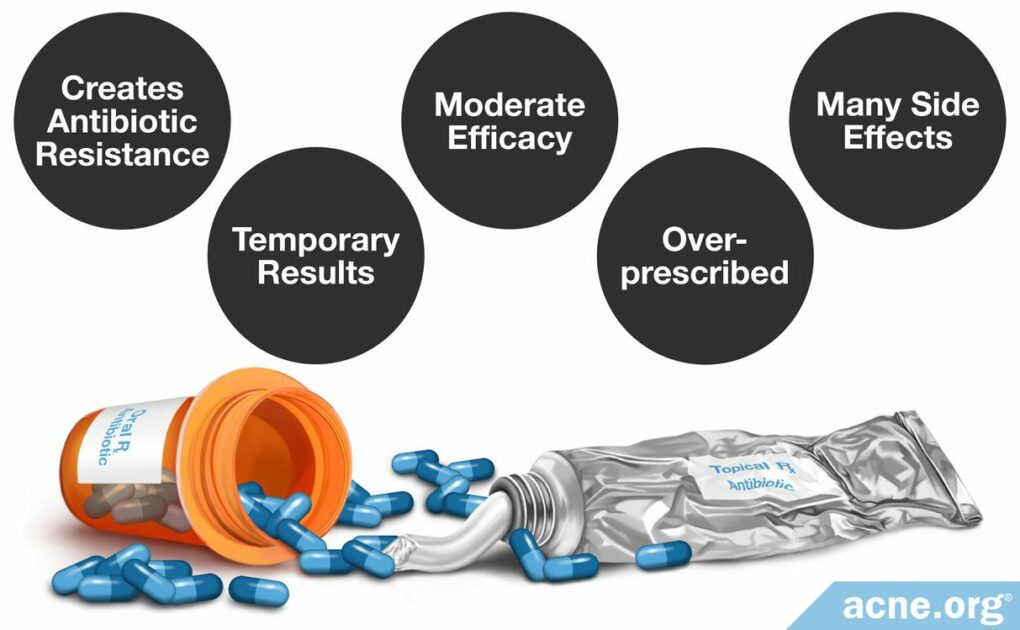 Because They Provide Limited Effectiveness and Come with Many Side Effects, They Should Be Met with Caution

Antibiotics can sometimes be somewhat effective in treating acne. However, there are several problems with using antibiotics to treat acne:

Antibiotics are powerful medicines that can save lives when used appropriately for bacterial infections. They may have a legitimate role in acne treatment in the short term in some cases, but they should be drugs of last resort, not the first options used. And when they are used, they should be prescribed sparingly and only for short periods of time–no longer than 3 months.

Be Your Own Advocate: If your doctor prescribes an antibiotic to treat your acne, do not simply accept it without question. Ask your doctor about side effects and about other options instead of antibiotics. If you do decide to use antibiotics, never use them for more than 3 months and always take them on time and complete the entire prescribed course, because skipping doses or stopping too soon increases the chances of developing resistant bacteria. Before considering antibiotics, always try other topical medications such as benzoyl peroxide first, and only use antibiotics if these other medications do not work.

Doctors sometimes prescribe both topical and oral antibiotics to treat acne, especially severe acne. This practice is controversial. While prescribing antibiotics for acne remains common, as many physicians become increasingly wary of antibiotics’ limited effectiveness and drawbacks, they are prescribing them less frequently.

Antibiotic medications are sometimes helpful in treating acne, but they also have many side effects that range from mild skin irritation and stomach upset to severe neurological problems and life-threatening diarrhea. Other concerning long-term side effects include the possibility of permanent tooth and skin discoloration.

For all of these reasons, it is important that acne patients try other options first. If antibiotics are chosen as a treatment, they should be prescribed for a maximum of 3 months, and should always be prescribed alongside other medications and never on their own.1

How Effective Are Antibiotics and How Do They Compare with Other Medications?

While antibiotics can work to some degree in some people, results are unimpressive, particularly when compared with other, safer treatment options that work just as well or better. Let’s have a look.

Several studies show that oral antibiotics can be somewhat effective in treating acne3-5, and may reduce symptoms by approximately 50%3, but are not more effective than other medications.

Doctors almost always prescribe topical antibiotics with benzoyl peroxide or one of the available topical retinoids such as tretinoin in order to reduce the antibiotic resistance that occurs with antibiotic use. This is especially true of erythromycin and clindamycin since they cannot be used as a single therapy due to their high potential of causing antibiotic resistance.2

It appears that combining other medications with topical antibiotics is superior than either used alone, as explained in a scientific article published in 2007.9

Side Effects of Antibiotics

Even when they do show some results, both oral and topical antibiotics frequently cause side effects that range from mild to severe.

Click here for a full article outlining the side effects of antibiotics.

The majority of the side effects from oral antibiotics stem from the fact that antibiotics do not just kill the bacteria that they are targeting for a particular condition; they also kill beneficial bacteria along with the harmful ones. This leads to an imbalance in the bacterial composition of the intestines.

Oral antibiotics cause a wide variety of side effects, the most common of which is gastrointestinal upset, such as nausea and diarrhea, which occurs in up to 1/2 of patients taking oral antibiotics.11

Here are some other examples of side effects that various oral antibiotics can cause:

However, when applied to large areas of skin, clindamycin can also be absorbed into the body and cause serious systemic side effects, including:

Antibiotics are powerful medicines that can save lives when used appropriately for bacterial infections. They may have a legitimate role in acne treatment in some special cases in the short term, but they should be drugs of last resort, not the first options used. And when they are prescribed, they should be used sparingly and only for short periods of time–no longer than 3 months.