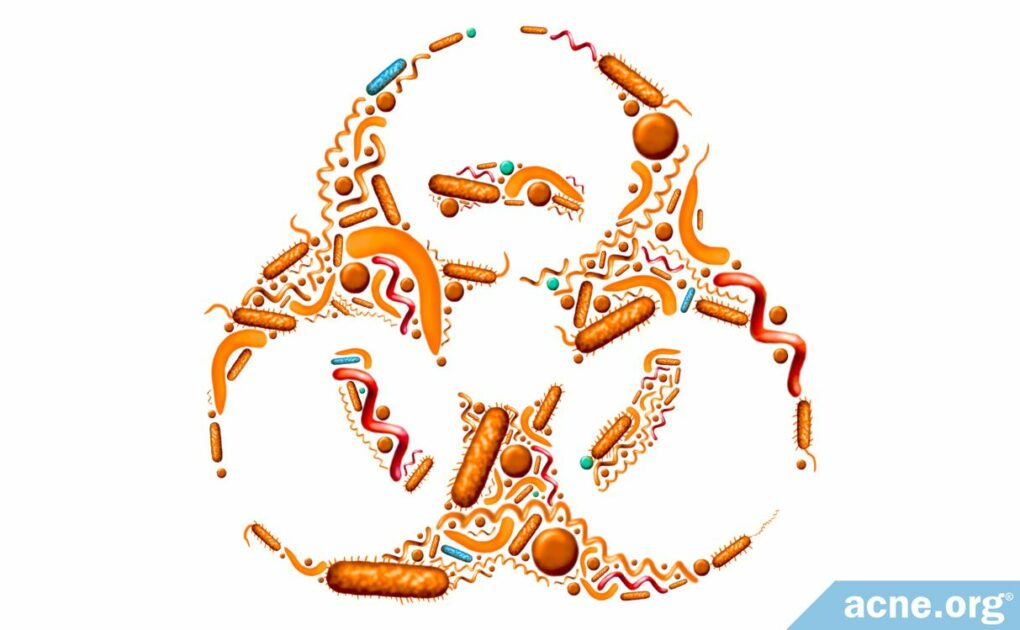 However, particularly when taken for extended periods of time, antibiotics can lead to lifelong antibiotic resistance for the user and the world at large.

Because antibiotics produce only limited results, and because their overuse presents such a danger to the patient and larger society, many doctors are now warning that antibiotics should be drugs of last resort, especially in acne treatment, and when they are used, they should be used sparingly and only for short periods of time (maximum 3 months).

Be Your Own Advocate: If your doctor prescribes an oral or topical antibiotic to treat your acne, do not simply accept it without question. Ask your doctor about other treatments you can use instead of antibiotics. If you do use antibiotics, remember that many experts caution against using them for more than 3 months. Also, always take them on time and complete the entire prescribed course, because skipping doses or stopping too soon increases the chances of developing resistant bacteria.

Doctors sometimes prescribe antibiotics to treat acne, especially severe acne. This is highly controversial because they do not tend to work better than other medications, and sometimes do not work at all. They also only offer short-term relief and have significant drawbacks that limit their usefulness.

These drawbacks include a wide variety of side effects, which range from mild skin irritation and stomach upset, to permanent tooth and skin discoloration or life-threatening diarrhea.

Another important drawback that is often missed because it does not show up in the short term as an obvious side effect is a phenomenon called antibiotic resistance, which affects not only the individual taking the antibiotic but the world as a whole. In this article, we will discuss the problem of antibiotic resistance.

What Is Antibiotic Resistance, and Why Is It a Problem?

The world is waking up to how antibiotic prescriptions for acne may increase bacterial resistance, as noted in the quote from a study in the Journal of the American Academy of Dermatology below:

“Despite the efficacy of antibiotics, there have been calls to limit their use in acne because of concerns for bacterial resistance.”1

In fact, several researchers have pointed out that antibiotic prescriptions for acne are a major source of concern, as acne is the most common condition for which dermatologists prescribe antibiotics. Research suggests that acne patients who are treated with antibiotics not only develop antibiotic-resistant bacteria, but are also very likely to transfer these bacteria to other people.2

Because of increasing concern about antibiotic resistance, scientists recommend that antibiotics not be used to treat acne when possible, and when needed, antibiotics should be used only for short periods of time (up to 3 months).1,3

Why Using Antibiotics for Longer Periods of Time Causes Problems

The reason that scientists recommend limiting antibiotic usage to 3 months is that longer treatment periods expose bacteria to the antibiotic for extended periods of time, giving the bacteria time to develop resistance. However, in a worrisome finding, doctors often prescribe antibiotics for considerably longer than 3 months, as two recent studies reported.1,4

Recent research indicates that some of the antibiotics that are most frequently prescribed for acne, such as erythromycin and clindamycin, are already creating a high incidence of antibiotic resistance. Studies performed in Europe and Hong Kong have found antibiotic-resistant bacteria in approximately half or more of acne patients.5-7

Of all topical antibiotics, resistance to erythromycin is most common, as two scientific articles point out.3,9

Resistance to erythromycin and clindamycin is now a worldwide problem, which is made worse by the fact that resistant bacteria can be transferred from person to person.

Oral antibiotics are a large part of the problem because once swallowed, they eliminate many groups of bacteria, which can cause many different strains of bacteria to become resistant.9

In order to reduce the risk of antibiotic resistance, scientists recommend replacing oral antibiotics with a topical treatment regimen, such as benzoyl peroxide and topical retinoids (tretinoin, adapalene, or tazarotene), whenever possible.

If doctors do prescribe antibiotics for acne, they should combine antibiotics with benzoyl peroxide or topical retinoids, in addition to keeping treatment duration to 3 months or less. These recommendations were described in two recent article for doctors.9,10

Given the dangers of antibiotics, they should only be used as drugs of last resort for acne treatment. If deemed necessary, they should be administered sparingly and for short duration (less than 3 months).