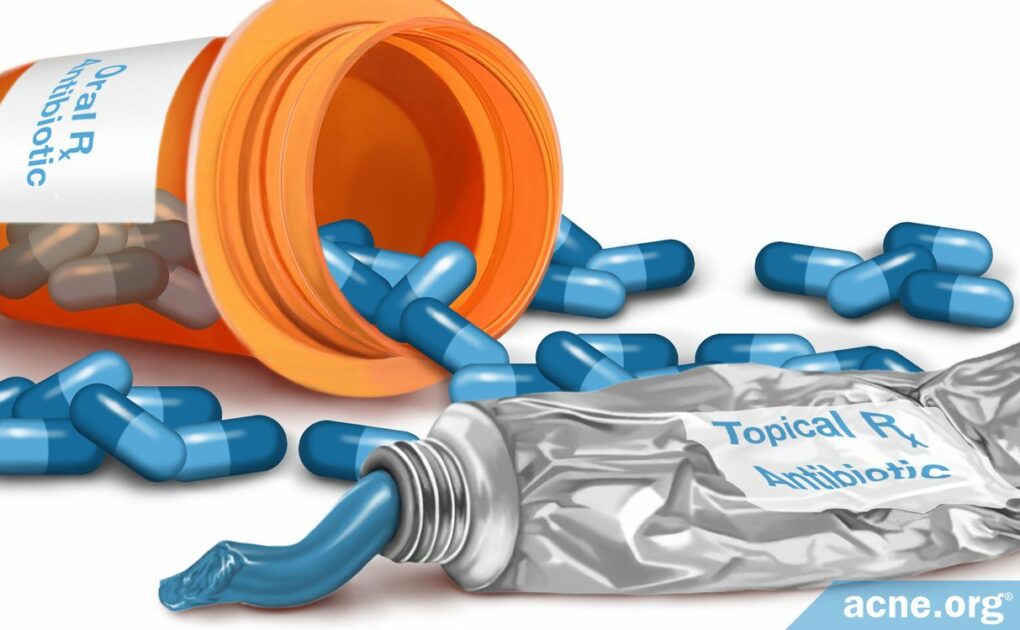 Are Some Worse Than Others?

Despite these side effects, and despite the fact that antibiotics produce only moderate results and only work for some people, doctors sometimes prescribe topical or oral antibiotics to treat acne.

If your doctor recommends antibiotics for your acne, ask about other treatments that come with fewer side effects and are more effective.

My Experience: When I had bad acne, my doctor put me on oral tetracycline, which did not improve my acne, but did upset my stomach. Later, a different dermatologist put me on clindamycin, a topical antibiotic, and while I did not suffer noticable side effects, my skin was never worse in my life than when I was on clindamycin. I am only one person, but many people echo my experience. Antibiotics can come with side effects and often don’t help with acne.

Despite not working at all for some people, and producing only moderate results when they do work, doctors frequently prescribe topical or oral antibiotics to treat acne. No antibiotic should be used for longer than 3 months, and therefore when they do produce results, the results are temporary. They also come with potentially serious side effects and should be used with caution.

Topical antibiotics work primarily by reducing inflammation rather than by killing bacteria.

Research indicates that while topical antibiotics can kill bacteria in the lab, they do not do so in human skin. When used to treat acne, they do reduce the numbers of acne bacteria by a minuscule amount, but not significantly.

According to a 2004 article in the journal Drugs, “Topical antibiotics have both anti-inflammatory and antibacterial mechanisms… Very little information is given in the literature concerning the [antimicrobial] effect of the topical antibiotics on C. acnes, and the published research suggests that both topical erythromycin and clindamycin have a moderate direct effect on C. acnes, not significantly reducing the number of surface and follicular bacteria… [This] means that topical antibiotics would act on inflammatory lesions by inhibiting inflammatory substances produced by C. acnes.”1

Oral antibiotics are usually prescribed for

A 2013 article in the Sao Paulo Medical Journal states, “[Oral antibiotics] act by reducing bacterial colonization and inflammation in the affected follicles. Despite their effectiveness in reducing the number of inflammatory lesions, no oral antibiotic completely clears acne.”2

When prescribing antibiotics, whether topical or oral, doctors recommend the following precautions:

Side Effects of Topical Antibiotics

The most commonly prescribed topical antibiotics for acne are:

Skin irritation is the most common side effect of both medications.

According to a 2015 article in the American Journal of Clinical Dermatology, “Local skin irritation that manifests as [redness], dryness, and burning at the application site is the most common adverse effect associated with topical antibiotic use. Similar to other topical agents, changing the formulation may help improve symptoms.”3

Clindamycin’s most common side effect is skin irritation.4

When applied to large areas of skin, clindamycin can also be absorbed into the bloodstream and produce systemic side effects. Case reports indicate that absorption of clindamycin can cause gastrointestinal problems, such as severe diarrhea or overgrowth of dangerous bacteria that can disrupt the gastrointestinal system. Although research studies have not found a significant association between clindamycin use and such symptoms, doctors recommend the following precautions:

Erythromycin produces skin irritation in up to 20% of patients, but it is not absorbed into the body in the same manner as clindamycin, so it does not produce systemic side effects.

According to a 2013 article in Expert Opinion on Drug Safety, “Common adverse effects of erythromycin use are burning, peeling, dryness, [itching], and [redness]. In a study of 208 patients in a 12-week, multicenter, double-blind, controlled study comparing 2% erythromycin to [the same formulation without erythromycin]…92% experienced no peeling and 80% experienced no [redness] in the treatment group.“4

Side Effects of Oral Antibiotics

Oral antibiotics are taken by mouth and are absorbed into the bloodstream. With all oral antibiotics, the most common side effect is gastrointestinal distress, such as nausea, vomiting, or diarrhea.

All oral antibiotics can cause side effects that range from uncomfortable to dangerous.

The most commonly prescribed oral antibiotics are:

The most common side effect of tetracycline is gastrointestinal problems, which affect up to half of patients who take it. Tetracycline kills not only the harmful bacteria for which it is prescribed, but also beneficial bacteria that lives in the intestines and keeps them healthy. With prolonged use, these intestinal imbalances can be passed to close contacts, such as family members.

According to a 2015 article in the American Journal of Clinical Dermatology, “The most common reported side effect of oral tetracyclines is gastrointestinal upset. Studies have shown that long-term therapy favors multi-drug-resistant organisms in the intestines and can also affect the gastrointestinal flora of close contacts.”3

A 2013 article in Expert Opinion on Drug Safety also notes, “The most commonly reported side effect of oral tetracycline is gastrointestinal distress, such as nausea and esophagitis, with the reported rate of any type of gastrointestinal event in all the trials ranging from 0.54 to 51.7%.”4

The second most common side effect of tetracycline is skin reactions – which occur in up to 30% of patients taking it – including rashes, itching, and increased sensitivity to the sun (photosensitivity).4 It can also cause permanent tooth discoloration, candidiasis (a fungal infection of the skin or mucus membranes), and even sudden outbreaks of acne.

A 2015 article in the American Journal of Clinical Dermatology states that “tetracycline is the most likely antibiotic in its class to cause candidiasis and tooth discoloration.”3

Doxycycline is in the tetracycline family of antibiotics, and therefore causes all of the same side effects to tetracycline, but is more likely than tetracycline to cause increased sensitivity to the sun.

A 2015 article in the American Journal of Clinical Dermatology notes, “The most common adverse effect of doxycycline is gastrointestinal distress. Unlike tetracycline, this agent should be taken with food to help minimize gastric irritation… Doxycycline is the most phototoxic of the tetracyclines, causing [redness] and [swelling from excess fluid accumulation] in sun-exposed areas…Patients need to be advised to avoid direct sun exposure and to wear appropriate sunscreen.“3

Doxycycline can also cause permanent tooth discoloration in children and can cause candidiasis.

According to a 2013 article in Expert Opinion on Drug Safety, “Tetracyclines can also lead to permanent discoloration of teeth in children whose teeth are developing, as the drug incorporates into tissues that are calcifying at the time of their administration leading to yellow or gray to brown discoloration of both the primary and permanent [teeth]. In addition, vaginal candidiasis can manifest with use of tetracycline, and typically Candida albicans [the fungus that causes candidiasis] is present at the involved site.“4

In addition to the usual gastrointestinal symptoms, it causes central nervous system side effects, such as lightheadedness and vertigo, in up to 67% of patients who take it.

According to a 2015 article in the American Journal of Clinical Dermatology, “Minocycline is more likely to cause central nervous system disturbances than are other tetracyclines. Vertigo (significantly higher prevalence in women), dizziness, ataxia [lack of muscle control], and lightheadedness occur…and tend to resolve with cessation of treatment. Starting treatment at a lower dose or using the extended-release formula can help prevent these effects.”3 Like tetracycline and doxycycline, minocycline can also cause permanent tooth discoloration, but can also cause skin discoloration.

According to the same 2015 article in the American Journal of Clinical Dermatology, “Minocycline therapy has been associated with either a blue/black or ruddy brown discoloration of the skin that most commonly occurs in acne scars, over the shins, or in sun-exposed areas. As with doxycycline, pigmentation of teeth is also possible, especially if given to children aged less than 8 years.”3

In rare cases, prolonged use can cause autoimmune diseases.

The same article notes, “The development of autoimmune diseases has been reported with the use of minocycline and represents a rare but serious adverse effect. These diseases include drug-induced lupus, autoimmune hepatitis, serum sickness-like reaction, and hypersensitivity syndrome.”3

In addition, minocycline can cause another rare but serious side effect called intracranial hypertension, which is an increase in the pressure inside the skull. Because this side effect occurs more frequently in people who are also taking oral retinoids, such as isotretinoin, doctors recommend that minocycline not be combined with them.3

The authors of the study, published in JAMA Dermatology in 2019, wrote, “The transient growth of bacterial populations, such as Pseudomonas species, immediately following antibiotic treatment points toward the possibility of opportunistic skin infections, such as gram-negative folliculitis, with prolonged antibiotic therapy for acne.”5

TMP-SMX (trimethoprim-sulfamethoxazole) is occasionally prescribed for acne. It can cause severe side effects such as rashes, hypersensitivity reactions, and dangerous changes in blood cells. Because of the severity of these side effects, doctors use caution when prescribing TMP-SMX and typically reserve its use for patients who cannot tolerate other medications.3

According to a 2015 article in the American Journal of Clinical Dermatology, “Azithromycin is generally well-tolerated, causing only mild and transient gastrointestinal disturbances that can be alleviated with the use of antacids prior to treatment.”3

Amoxicillin is occasionally prescribed for acne, though there is little evidence indicating whether it is effective for this condition.

According to a 2007 article in Advances in Dermatology, “Amoxicillin has been used anecdotally in the treatment of refractory acne vulgaris, but there are no studies of efficacy for amoxicillin for this indication.”8

Amoxicillin is generally well tolerated, with relatively mild side effects. The most common side effects are similar to those of other oral antibiotics: gastrointestinal upset, skin irritation, and candidiasis.3,9

Doctors sometimes prescribe oral erythromycin as an alternative antibiotic to patients who are allergic to tetracyclines or who are pregnant, as it is one of the few antibiotics that are sometimes prescribed during pregnancy.4 Like other oral antibiotics, erythromycin causes gastrointestinal side effects, such as nausea, abdominal cramping, and vomiting. However, it also frequently interacts with other medications, and these interactions can cause serious side effects, such as arrhythmias (irregular heartbeat) and sudden death.4,10

Neither topical nor oral antibiotics will completely clear acne. When they work at all, they should only be used for 3 months, which means results will be temporary at best. Topical antibiotics often produce skin irritation, and oral antibiotics are well known to produce gastrointestinal upset and nervous system problems, and sometimes more serious lifelong side effects like permanent tooth discoloration, hearing loss, or death.

Acne therapy has come a long way since the time when doctors only had antibiotics to prescribe to patients. If your doctor prescribes antibiotics for your acne, be sure to ask why this is the treatment of choice, and get a second opinion.