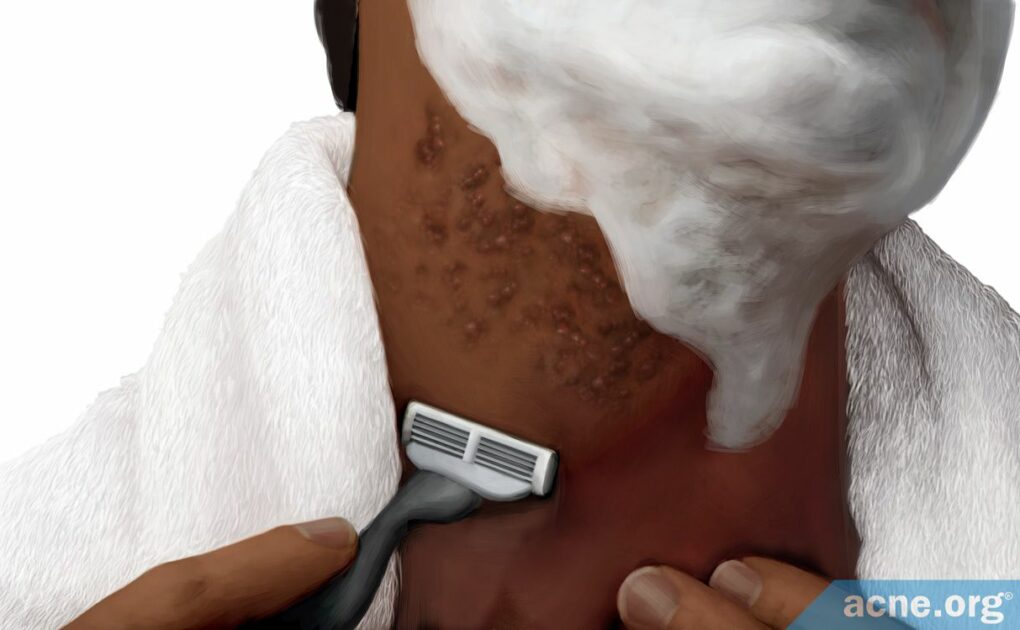 Razor bumps, also known as ingrown hairs, are a common skin condition caused by shaving the skin of the face and/or body. Razor bumps occur when shaved hairs get trapped inside the skin, causing lesions that resemble acne.

They are more common in people with curly hair, especially black males, and can be prevented by no longer shaving or changing hair removal practices. Razor bumps may also be treated with a proper skincare regimen.

Razor bumps or “shave bumps” are a common skin condition that develops as a result of shaving and are a type of ingrown hair. While ingrown hairs can result from many hair removal practices, such as waxing, plucking, or threading, razor bumps are ingrown hairs caused specifically by shaving.

The medical term for razor bumps and other types of ingrown hairs is pseudofolliculitis barbae. Razor bumps result in firm, skin-colored/red/dark lesions that look like acne and can be itchy or sore. Sometimes, liquid that resembles pus can accumulate in these lesions.1 Although these breakouts appear similar to acne, they should not be mistaken for it.

Who Is Most Likely to Develop Razor Bumps?

Although anyone can develop a razor bump occasionally, razor bumps are most common in people whose hair curls tightly. Since people of African descent typically have curly hair, they are the most prone to developing razor bumps. As Drs. Beth and Adam Goldstein–both professors of medicine at the University of North Carolina–wrote on a website for doctors called UpToDate, “Between 45 and 83 percent of black men and 3 percent of white men who shave facial hair develop [a problem with razor bumps].”1

Most people, regardless of ethnicity, will develop a razor bump once in a while. This includes women who shave parts of their bodies. Razor bumps most often appear on the neck. However, any area of the body where a person shaves hair, such as the legs, armpits, or pubic region, can develop razor bumps.

How Do Razor Bumps Develop?

When a hair is shaved off, it soon begins to regrow. As the hair regrows, it may become trapped in the skin, developing into an ingrown hair. When this occurs, the body sees its own hair as an “intruder” and attacks it with an inflammatory response. An inflammatory response is the body’s reaction to any foreign object or anything that happens to be in a place on the body where it is not normally supposed to be. As a result, the body tries to fight off the “intruder” by attacking it with inflammatory cells and substances. This defensive reaction causes the typical signs of inflammation, such as redness, swelling, heat, and soreness. The same reaction occurs when you harm the skin with a wooden splinter and do not remove it immediately: after a while, the skin displays characteristics of inflammation mentioned above. In the case of ingrown hairs, the regrowing hair itself becomes the “intruder,” and the resulting inflammation leads to what we call a “razor bump.”

Normally, hair emerges through the top of a pore in the skin. However, when a shaved hair regrows, it can pierce the skin inside the pore. This can occur in one of two ways.

1. In extrafollicular penetration, the hair emerges from the skin pore, but then curls back on itself and re-enters the skin near the follicle. In other words, a loop of hair is formed above the skin. This is especially likely to occur when the hair is curly, short, and has a sharp end due to shaving. As the hair continues to grow, it eventually finds its way out of the skin again, but this takes several weeks.

Transfollicular penetration can also result from stretching the skin when shaving. When a person stretches an area of skin, passes over it with a razor, and then releases the skin, the cut hairs shrink back into their follicles. This results in short, sharp-ended hairs just under the skin surface, and these hairs are especially likely to become trapped when they start to regrow.

Multi-blade razors contribute to transfollicular penetration in a similar manner. When a person shaves with a multi-blade razor, the first razor edge pulls the hairs upward and the next razor edge cuts them. After shaving, the hairs shrink back into their follicles. This results in short hairs with sharp ends just beneath the skin surface, which are likely to grow into the surrounding skin.

People with tightly curled hair, such as people of African descent, are particularly likely to develop razor bumps for the following reasons:

Once a regrowing hair pierces the skin by either extrafollicular or transfollicular penetration, the spot where the hair is trapped becomes inflamed, and a dense, flesh-colored or red or hyperpigmented (darker than the surrounding skin) papule appears.1,3 This papule is what we call a “razor bump.”

Soon, the bump may transform into a pustule (a fluid-filled swelling). Pustules due to ingrown hairs are often sterile, meaning they are not filled with bacteria or pus. Instead, these pustules are filled with liquid that comes from the blood vessels near the ingrown hair. When an ingrown hair triggers an inflammatory reaction, the blood vessels around the hair swell, causing the skin to become red and warm to the touch. Some of the extra fluid from the blood vessels leaks out into the lesion caused by an ingrown hair, forming a sterile pustule. In contrast, pustules caused by acne do contain bacteria and pus and are therefore not sterile. However, scratching or picking at razor bumps can cause an open wound–even if that open wound is merely a tiny crack in the skin–which can let bacteria into the skin and lead to infection. If this occurs, pustules containing bacteria and pus may develop–just like in acne.1

Hyperpigmentation after a razor bump heals

After the razor bump clears up, the skin often remains hyperpigmented for several months before fading: this is especially likely to occur in dark-skinned people.1

Management of razor bumps should be heavily focused on prevention, rather than treatment. Additionally, some topical medications are available to treat razor bumps. There are three approaches to preventing razor bumps.

Discontinuing shaving and allowing the hair to remain at a length that makes penetration of the skin unlikely is the most effective preventative measure against razor bumps. For men, grooming the beard with scissors or an electric clipper can be an alternative to shaving. It is recommended not to cut the hair shorter than 0.5cm (5mm), at least until ingrown hairs clear up. Depending on the person and the severity of the condition, razor bumps and any associated hyperpigmentation can take from one to six months to clear up.

Sometimes, discontinuing hair removal is undesirable or even impossible, such as for men in the U.S. Army and Marine Corps, who are not permitted to grow beards. If you continue to shave, you may want to adjust your shaving routine by following these tips:

Alternatively, razor blades can be replaced by electric clippers that leave the hair at least 5mm long so that the hair does not curl back and pierce the skin.

The problem of recurring razor bumps can be solved by long-term hair reduction, which destroys the hair follicles and can be accomplished by laser hair removal. Of course, the downside is that you can no longer grow hair in that area–for example, a man who undergoes long-term reduction of facial hair will no longer be able to grow a beard.

Laser hair removal usually requires several sessions to achieve a major reduction in hair growth, because each treatment only destroys a small fraction of hair follicles. The lasers work by targeting the dark pigment called melanin, which can be found in both skin and hair. Laser hair removal is most effective when a person’s hair is much darker than the skin, so that the laser can safely destroy the hair follicles without damaging the pigment in the skin. Conversely, the treatment does not work well for people with blond or gray hair because their skin is as dark as, or sometimes even darker than, the hair. Drs. Beth and Adam Goldstein wrote, “[P]atients with darkly pigmented hairs are the best candidates for this procedure. The treatment is poorly effective for white or [gray] hairs.”1 Potential risks of laser hair removal include temporary or permanent changes in skin pigmentation, blistering, and scarring. The risk of changes in skin pigmentation is higher for individuals with darker skin. To minimize the chances of this side effect, the clinician should perform a spot test on an area of the skin that is not very visible, so that he or she can adjust the laser settings prior to treatment.

The most common drugs used to treat razor bumps are:

Information on the efficacy of these treatments is limited, and more research is needed to determine how helpful these and other drugs may be in treating razor bumps.

One more thing to keep in mind is that just like acne lesions, razor bumps that have healed can leave behind red or dark marks (hyperpigmentation). This is especially common in people with dark skin. Sun exposure can make hyperpigmentation linger, so to ensure that hyperpigmentation fades as quickly as possible, use sunscreen whenever you are out in the sun for long periods.4