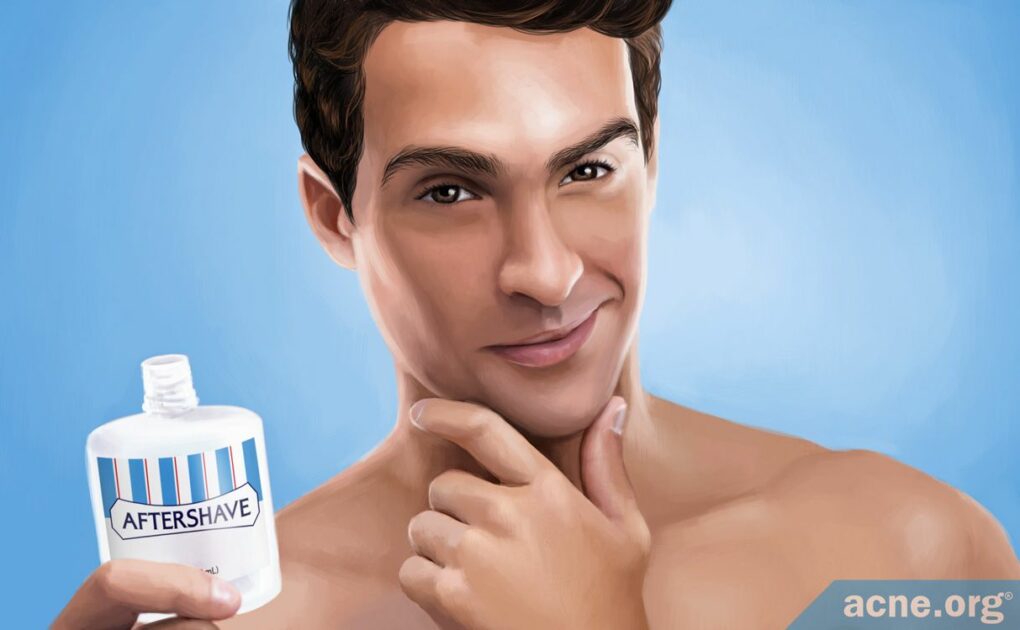 Some Aftershaves are Safe to Use, but Make Sure They Are Alcohol-free

Aftershaves are applied to the skin after shaving to disinfect nicks and cuts and relieve discomfort after shaving. They are unnecessary, but most are safe to use on acne-prone skin as long as they do not contain:

Note: If you are breaking out at all, don’t use an aftershave. Instead, first concentrate on getting your skin completely cleared up. Once you are clear and have been clear for a few weeks, then it’s safe to add in one variable at a time, such as the addition of an aftershave, and see if you stay clear.

My Experience: I’ve tried aftershaves a few times, but since they don’t perform a necessary function, they seem silly to me. Plus, I figure why not save money and potential irritation from using too many products on my skin.

Aftershaves are liquid products applied to the skin after shaving that are meant to perform two main functions:

While an aftershave can feel “refreshing” after a shave, some ingredients in some aftershaves might cause problems for people with acne. For this reason, it is best to first get your acne under complete control before adding an aftershave to your daily regimen. Once you are completely clear of acne, then you can add in an aftershave if you’d like and see if you stay clear. If you break out, you’ll know it’s the aftershave causing the problem.

Are the Ingredients in Aftershaves Safe for Acne-prone Skin?

Some aftershaves contain problematic ingredients. I’ll go into detail about the ingredients commonly included in aftershaves, but if you are pressed for time or just want a quick overview, you can scan the rest of this article for any ingredient mentioned in red, which means it is important to avoid. And also, double check any aftershave you buy against the full list of comedogenic ingredients here at Acne.org.

Aside from an antiseptic and soothing ingredient, sometimes aftershaves also contain:

Next, since all aftershaves contain an antiseptic and soothing ingredient, let’s have a closer look at those ingredients in particular, starting with antiseptics.

The most common antiseptics used in aftershaves are (in order of how often they are used):

Alcohol is the most common. However, many aftershaves contain both alcohol and witch hazel. As we will see, it’s best to avoid aftershaves with alcohol in them, but witch hazel should be fine.

Alcohol Is A Powerful Antiseptic, but Can Dry the Skin

Alcohol is the most common antiseptic used in aftershaves. Unfortunately, it is also the worst antiseptic for acne-prone skin because it dries the skin. Dry skin is much more prone to irritation, which is a big issue because irritated skin increases the chances of acne breakouts. I recommend avoiding alcohol-based aftershaves.

Instead of an alcohol-based aftershave, consider one that contains witch hazel instead. Witch hazel disinfects the skin and is much more delicate than alcohol.

Witch hazel content in aftershaves: The U.S. Food and Drug Administration (FDA) recommends that the content of witch hazel in and aftershave lotion should be between 0.9% and 8% for it to be effective as an antiseptic.5 That means if witch hazel is listed in the first 1/2 of ingredients on an product’s ingredient list, it is likely included at a high enough amount to do its job.

Now let’s have a closer look at soothing ingredients.

Shaving often irritates the skin and increases the chances of acne breakouts. To calm down the irritation, an aftershave should contain a soothing ingredient.

The most common soothing ingredients in aftershaves are:

Some less common soothing ingredients may include:

Let’s have a look at the most common soothing ingredients and how they do their job.

Aftershaves often contain Aloe because it soothes the skin and helps to reduce the irritation after shaving. However, this is only true of certain types of Aloe. To do its job, it must be 100% Aloe gel. In other words, just because you see Aloe on the list of ingredients doesn’t mean it is performing its job. To learn more you can read a full article on Aloe here. But suffice it to say that if you see Aloe on an ingredient list, it probably won’t hurt.

We have seen that witch hazel is a welcome antiseptic ingredient. However, two studies performed in 1993 and 2007 show us that witch hazel also has moderate soothing properties. This is good for acne-prone skin because we know that irritation can contribute to acne.

However, sometimes tea tree oil is used in tiny amounts in aftershaves simply for fragrance. So just like aloe, just because you see tea tree oil on the label doesn’t mean it’s necessarily going to help. But it also won’t hurt.

Watch Out for Pore-clogging Ingredients

Be sure to check the ingredients on the package carefully to make sure none of them contain the following potentially pore-clogging ingredients.

Research shows that fragrances in skincare products are sometimes a cause of skin irritation. As we have discussed, irritating acne-prone skin can lead to breakouts. Therefore, when possible, look for an aftershave labeled “unscented” or “fragrance-free.”12 One exception is tea tree oil, which has a strong scent, and as we have discussed, is a welcome addition to aftershave.

If you have acne-prone skin, steer clear of alcohol-based aftershaves that can dry the skin and might make acne worse. Instead, use an aftershave that contains witch hazel and/or tee tree oil, and carefully check the list of ingredients on the package to make sure none of them will clog pores.