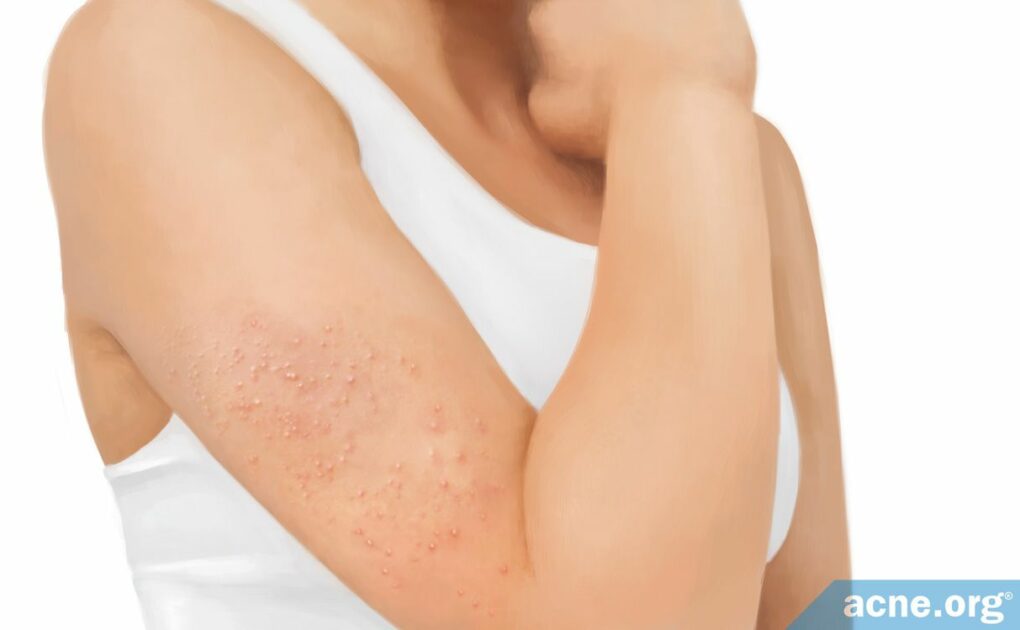 A Common Genetic Condition that Normally Goes Away on Its Own

Keratosis pilaris is a very common genetic skin condition that affects people of all ethnicities.

It presents as tiny, hard bumps, closely resembling goosebumps or chicken skin, typically on the back of the upper arms and/or the front of the thighs.

It is usually harmless and does not require medical attention. The bumps usually clear on their own over time.

Skin with keratosis pilaris is dry. So, here are a few things you can do about it:

If it’s really bothering you, treatments that may help are:

Different from Acne: Keratosis pilaris is unrelated to acne. In fact, research shows that if you have keratosis pilaris, you are less likely to develop acne – that’s how different the two conditions are.

Keratosis pilaris may develop at any age but usually starts either before the age of 2 or in adolescence.1 The condition is very common: it occurs in up to 70% of adolescents and 40% of adults.2 People of all ethnicities are equally at risk.

The signs and symptoms may include:

The bumps may appear anywhere on the skin except for the palms and soles. The most common locations include:

In adolescents and adults:

The condition usually fades on its own by the fourth decade of life or sooner.

Keratosis pilaris develops due to the buildup of keratin around the top of skin pores. Keratin is the main protein of the epidermis (the uppermost layer of the skin) that performs a barrier function, preserving skin integrity and warding off bacteria, viruses, and harmful chemicals.

Keratosis pilaris is a genetic condition that usually occurs in more than one family member. The way it is inherited is still being studied, but most likely it is passed on from a parent to child in an autosomal dominant pattern.2 In other words, there is a 50% likelihood of inheriting the condition if one of the parents has it and 75% likelihood–if both.

Many individuals with keratosis pilaris also tend to have one or several of the following conditions:

Normally, you do not need to visit a doctor for keratosis pilaris. If you do want to consult a doctor, he or she will easily identify the condition by closely looking at the affected skin. No tests are required.

You cannot cure keratosis pilaris, nor can you prevent it. The good news is that you do not need to–it is usually harmless and will fade away on its own over time. If the appearance it gives your skin disturbs you, try some of these self-care measures:

If self-care measures do not help, your doctor may recommend a topical medication, such as:

The two conditions share similarities, however. Both in acne and keratosis pilaris, keratin builds up around the top of skin pores and causes the skin pores to clog. Hence, some medications used in the treatment of acne, such as over-the-counter exfoliating creams that dissolve dead skin cells and prescription topical retinoids that promote cell turnover, can also help in keratosis pilaris.

On the other hand, increased keratin production is not enough for acne to develop. Other key factors that must be present are the elevation of androgens, which are male hormones that are present in both males and females, and inflammation. At present, we have no evidence to say that hormones and inflammation are in any way related to keratosis pilaris. In fact, one study suggests the opposite: that your chances of developing acne may be lower if you have keratosis pilaris, and if you do happen to develop both conditions, your acne may be less severe compared to people who just have acne by itself.3