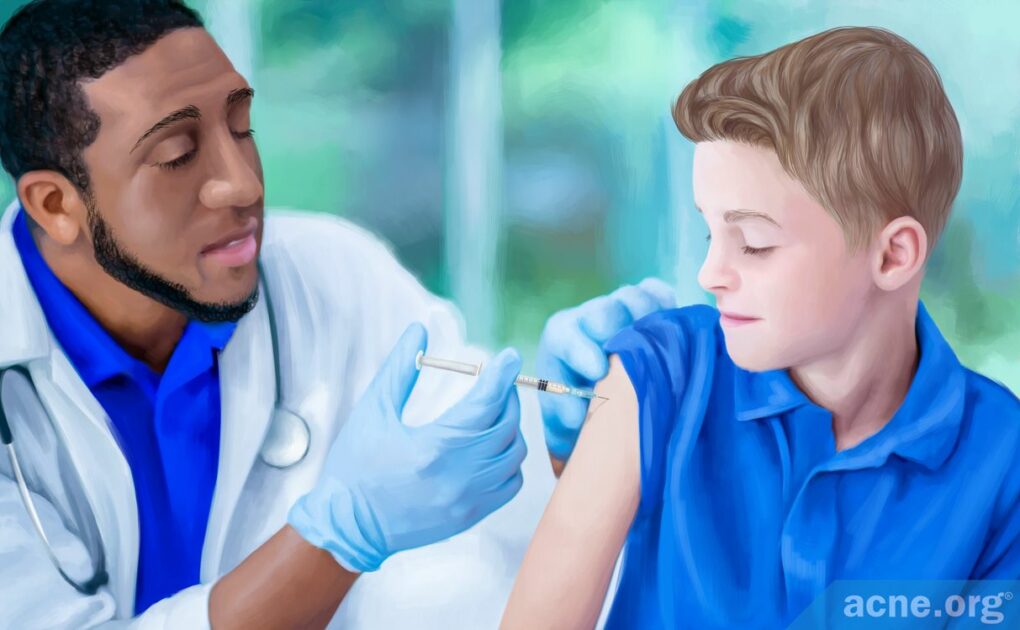 Research Is Ongoing, but an Anti-acne Vaccine Is Still a Long Way Away, If It Ever Arrives

An acne vaccine would prevent acne from developing and help many people avoid years of acne treatment. In the past five decades, researchers have made major strides toward creating an acne vaccine. However, many technical obstacles remain, and an anti-acne injection at your doctor’s office is still years away from becoming reality, if in fact it ever does.

Improving your acne can be a slow process, often involving trial and error until you find a treatment that works for you. To make matters worse, some of the commonly prescribed treatments, such as isotretinoin (Accutane®) and antibiotics, can also come with significant side effects.

Imagine the frustration and pain we could prevent if every child could go to his doctor for a routine checkup and, together with the vaccine against measles and mumps, get a quick injection to ward off acne.

Scientists are working on a few different approaches that show promise for an acne vaccine in the future. However, we are still years away from knowing whether a safe and effective vaccine will become a reality.

Let’s take a look at how an acne vaccine would work and what scientists still need to do to create one. But first, we need to understand exactly what a vaccine is.

What Exactly Is a Vaccine?

A vaccine is like a harmless version of an infection that we intentionally bring into the body to train our immune system to fight it. Once the immune system has learned to recognize and attack the harmless version, it will “remember” and be prepared when the harmful version comes along, rendering it inert before it creates disease.

How exactly do we make a harmless version of an infection? Infections occur when a pathogen (usually some kind of bacteria or virus) enters the body and produces toxins or otherwise wreaks havoc. A vaccine usually consists of one of the following:

Vaccines have played an enormous role in preventing infectious diseases around the world. In fact, certain diseases, like polio, are almost completely eradicated thanks to vaccines.2

Now, you might be thinking, “But acne is not an infectious disease.” This is true, but a type of pathogen, in this case a bacteria called C. acnes, does contribute to acne. Let’s take a look at how targeting this bacteria might allow scientists to design a vaccine against acne.

C. acnes is a type of bacteria that lives in the skin of almost all humans. It can contribute to acne by:

In other words, C. acnes makes acne worse. Therefore, getting rid of C. acnes should improve acne. In fact, we know that treatments that kill C. acnes, like benzoyl peroxide and antibiotics, can improve acne.4

All of this gives scientists hope that a vaccine that trains the body to attack C. acnes could improve or perhaps even fully eliminate acne. However, the case is not so cut and dry. There are also good reasons why attacking C. acnes might not work, might only work somewhat, or might even be harmful to our health.

Some scientists have doubts that attacking C. acnes would significantly reduce or eliminate acne, because acne can develop without this type of bacteria. Even inflammation, which is such a critical component of acne, can occur without C. acnes. Most likely, C. acnes only plays a role in the later stages of acne, increasing inflammation and making acne worse. In other words, getting rid of all C. acnes on a person’s skin might still allow acne to develop, but perhaps the acne would simply be milder without C. acnes.4

There is another good reason to approach a vaccine against C. acnes with caution. Almost everyone has C. acnes in their skin, and, under normal circumstances, this bacteria may be necessary for skin health.

According to a 2018 article published in the Journal of Investigative Dermatology, “Although C. acnes is suspected to be [disease-causing] in acne…[it] is also crucial for skin [health].”8 That is to say, it is possible that C. acnes is only harmful when it overgrows, whereas under normal circumstances, it is actually beneficial to skin health.

On balance, though, scientists still think designing a vaccine that targets C. acnes is worth a try. According to the authors of a 2013 article in the American Journal of Clinical Dermatology, “Despite many unanswered questions about C. acnes, [vaccination] with C. acnes holds promise for acne therapy.”4

How Would an Acne Vaccine Work?

As we have seen, an acne vaccine would have to contain one of the following:

Each of these vaccine types has some disadvantages.

Why Isn’t an Acne Vaccine Available Yet?

Despite promising research, we are still a long way off from an acne vaccine being available at your doctor’s office. Here are a few reasons why:

Another promising strategy to combat acne is using topical probiotics. Probiotics are products containing beneficial bacteria that may help prevent the overgrowth of C. acnes on the skin. Normally, different species of bacteria living on the skin exist in a balance, and probiotics may help to restore that balance in acne-prone skin. However, probiotics that specifically target acne are still under investigation.10