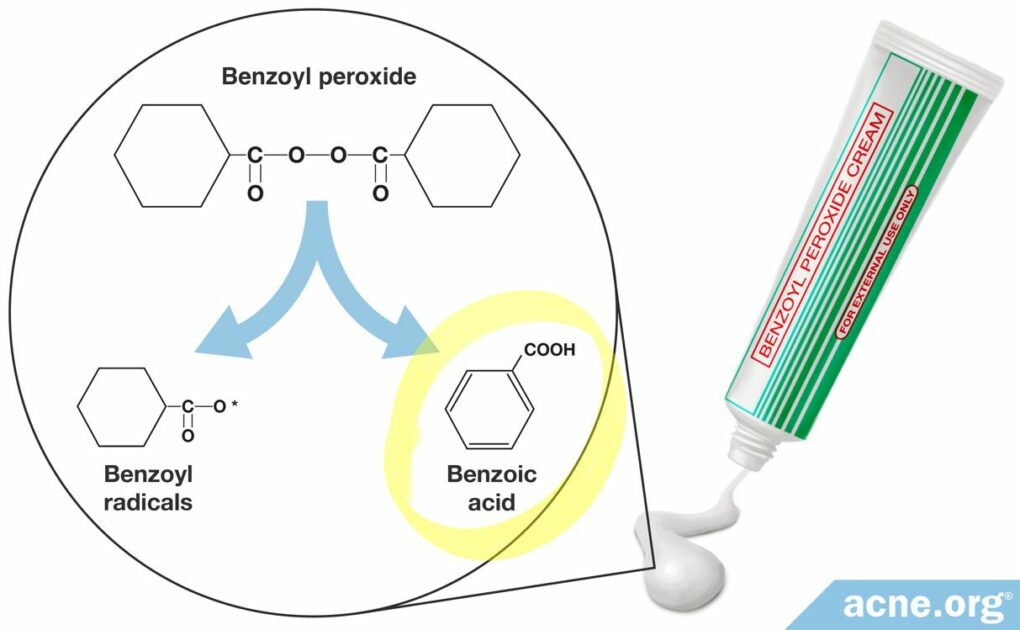 Benzoic Acid Forms from the Breakdown of Benzoyl Peroxide on the Skin. Once it Forms, Benzoic Acid Is Hypothesized to Work Similarly to Salicylic Acid to Clear Acne.

When benzoyl peroxide is applied to the skin, it breaks down into two parts:

To date, there is no direct scientific study that confirms this. Therefore, more research is needed to confirm that benzoic acid does indeed work to clear acne in a similar way to salicylic acid.

Outside of its potential medicinal role, benzoic acid is widely used as a preservative that is added to many foods, beverages, and skincare products.

When it comes to skincare products, the Cosmetic Ingredient Review Expert Panel has concluded that it is safe to include benzoic acid as an ingredient at concentrations up to 5%.5,6

Benzoic Acid Might Act Similarly to Salicylic Acid on the Skin

In order to understand what effects benzoic acid might have on the skin, let’s explore the known effects of salicylic acid on the skin.

It is Unclear How Effective Benzoic Acid is at Clearing Acne

Research has found that benzoyl peroxide, in concentrations of 2.5%-10%, can generally clear 45%-65% of acne lesions, and when used correctly can clear the skin 100%. It is unclear what percentage of this acne clearance is due to hydrogen peroxide and what percentage is due to benzoic acid, but it is quite possible that benzoic acid might be an important part of the effectiveness of benzoyl peroxide.

Side Effects of Benzoic Acid

Both benzoyl peroxide and benzoic acid are safe for human use and cause only mild side effects in most people.

Higher concentrations of benzoyl peroxide, and presumably benzoic acid, can cause more side effects, including mild skin irritation and dryness.3,4,11,12