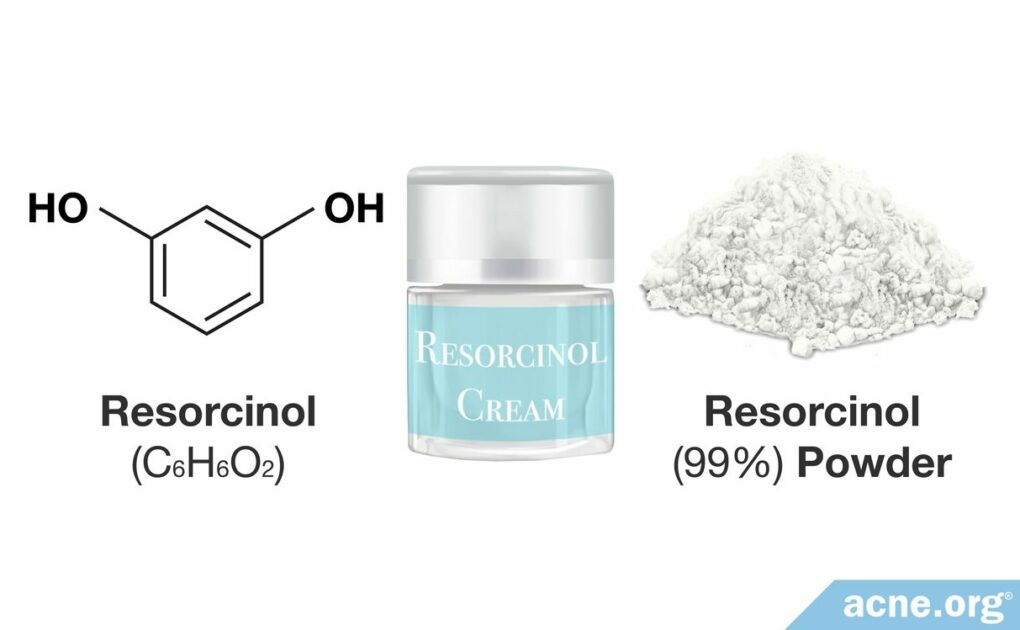 Resorcinol Is a Peeling Agent That Can Exfoliate the Skin

What It Is: Resorcinol is one of five FDA-approved over-the-counter acne medications, the others being benzoyl peroxide, salicylic acid, sulfur, and adapalene (0.1%). However, due to its tendency to cause more severe side effects when compared to other over-the-counter medications, it is rarely found in acne treatment products. When it is found in products, it is almost never on its own, and is instead combined with other medications, particularly sulfur.

How It Works: Resorcinol exfoliates the skin by breaking apart dead skin cells, allowing them to flake off the skin’s surface. This exfoliation then stimulates new skin cell production to replace these dead skin cells, keeping the skin turning over and helping to prevent clogged pores and acne.

Concentrations: Resorcinol is available as an over-the-counter (OTC) treatment at concentrations less than 2%. It is also used in professionally-administered chemical peels in concentrations up to 50%.

Side Effects: Lower concentrations of resorcinol cause mild side effects, including skin irritation, redness, peeling, dizziness, and hyperpigmentation (skin darkening). Higher concentrations of resorcinol can cause systemic toxicity (absorption of substance into the bloodstream) and more severe side effects, including rare side effects like cold sweats, fainting, purple-black urine, hyperthyroidism, and grayish discoloration of the skin.

Resorcinol is available both as an over-the-counter treatment and in professionally administered chemical peels, but is rarely used on its own.

How Resorcinol Works to Clear Acne

In normal, healthy skin, dead skin shed from the skin as they should. In acne, however, dead skin cells stick together and accumulate, causing clogged pores, which then turn into acne lesions.

Now that we know how resorcinol works to clear acne, let’s examine how well it works.

How Effective Is Resorcinol?

Over-the-counter resorcinol products, which contain up to 2% resorcinol, present fewer side effects than those containing higher concentrations and can be used daily.2

Scientists have not studied the ability of resorcinol on its own to treat acne, and have only studied it in higher percentages.

However, resorcinol is one of the main ingredients of Jessner’s solution, which is a chemical peel commonly used to treat skin conditions, including acne. Jessner’s solution has been studied for how effective it is in clearing acne. It contains:

The main side effects of resorcinol when used in concentrations lower than 30%, which includes OTC products as well as some professionally administered peels, are:

When used in lower concentrations (up to 2%) in over-the-counter products, side effects are much less pronounced.

The side effects of resorcinol when used in concentrations from 30 – 50% can be much more severe and include symptoms of systemic toxicity (absorption into the bloodstream). These side effects are rare and only occur in cases of excessive daily exposure.

These side effects include: