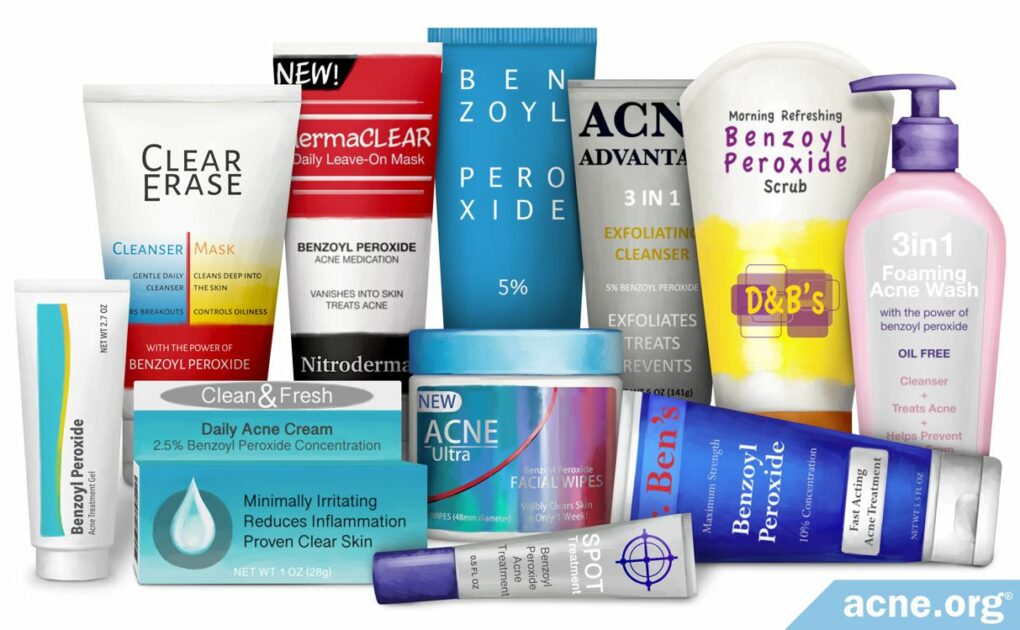 Benzoyl peroxide is a common topical acne treatment that is found in both over-the-counter as well as prescription products with concentrations ranging from 2.5 – 10%.

It takes approximately one month for the skin to become accustomed to benzoyl peroxide, and dermatologists refer to the discomfort during this initial time period as the “hardening effect” of benzoyl peroxide. This is why it is important to start with only a pea-size amount of benzoyl peroxide once per day for the first week, and only then begin slowly ramping up the dosage and frequency.

What is Benzoyl Peroxide?

Benzoyl peroxide is a white, grainy/powdery substance that has been used in several industries since the early 20th century. The first time benzoyl peroxide was used as a medication was in 1905, when it was used as an antiseptic for wounds. After this, it continued to be used to treat a variety of conditions, including burns and leg ulcers.

Benzoyl peroxide was first used to treat acne in 1965 and since then has been increasingly relied on to treat acne, either alone or in combination with other anti-acne medications, such as retinoids (tretinoin, adapalene, tazarotene).

When used to treat acne today, benzoyl peroxide is found in both over-the-counter and prescription products at concentrations ranging from 2.5 – 10%.1-3

Benzoyl peroxide works in four ways to treat acne. It:

How Effective Is It?

Several studies report significant effectiveness of 50% or more. However, since 50% isn’t good enough, it is important to use benzoyl peroxide properly to up its chances to completely clear the skin. When used properly and applied generously (after an initial ramp-up phase) it can completely clear acne.

The most common side effects associated with benzoyl peroxide are:

These side effects occur within the first few weeks of treatment, and dramatically subside after a few weeks of use.2,4

Pregnancy: When it comes to using benzoyl peroxide during pregnancy, the U.S. Food and Drug Administration (FDA) has classified it as a Category C drug, which means that its effects on the health of the fetus are unknown.11 However, doctors generally consider benzoyl peroxide safe to use during pregnancy because very little of it is absorbed into the blood. If you are pregnant, always check with your doctor before using any medication.

With antibiotics, bacteria can develop resistance, which means that all the bacteria is not killed by the antibiotic and it becomes less effective over time. Benzoyl peroxide does not cause antibiotic resistance.

Researchers have found that when benzoyl peroxide is used in combination with the antibiotic, clindamycin phosphate, there is 1600% less resistant bacteria than when clindamycin is used on its own. This means that using benzoyl peroxide with antibiotics helps to protect against the development of bacterial resistance.