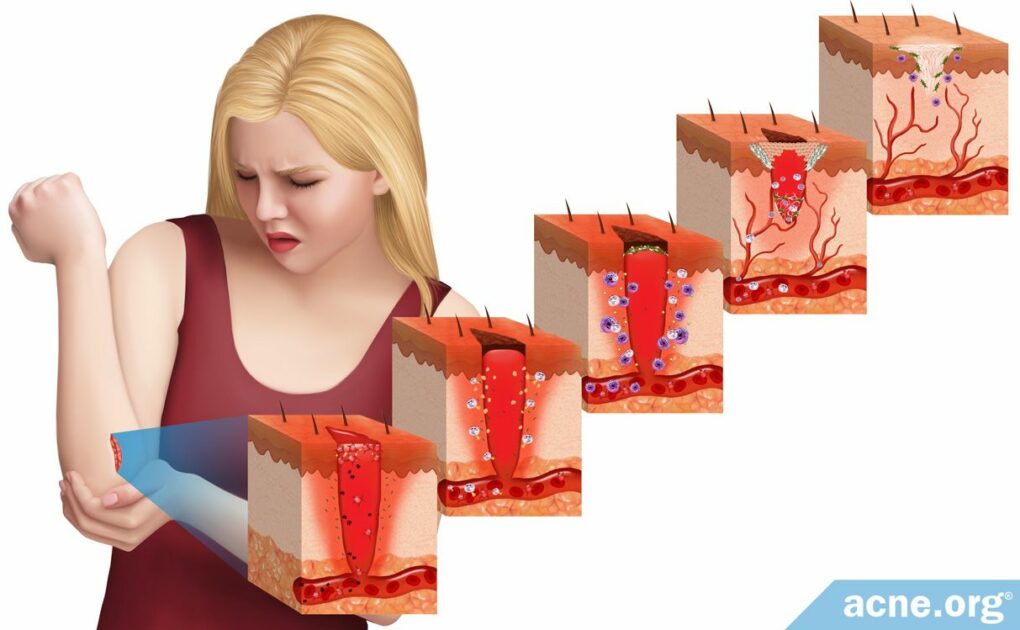 Wound healing is a complex process that involves several steps. We can simplify the process into four stages:

Acne lesions are a form of skin wound and heal using the same process as other wounds, excluding Stage 1: Blood Clotting, because acne lesions are not bleeding cuts, so there is no need for blood clotting. The duration and severity of inflammation in an acne lesion can influence whether the lesion leaves a scar and what type of scars it causes.

The skin is a complex organ that serves as the body’s first protective barrier against the environment. Because the skin is such an important barrier, it must be able to heal itself quickly after an injury, whether the injury is a cut or an acne lesion.

The wound healing process is quite complicated. To understand how it works, we can simplify the process into four stages, which occur in this order:

In the blood clotting stage of wound healing, cells stick together to form a blood clot to stop the bleeding, and inflammatory molecules move into the wound to start the process of healing.

When the skin is injured, such as in a cut, blood leaks from damaged blood vessels. Within minutes of the injury, cells called platelets move into the wound and use chemical signals to activate a protein called fibrin. Fibrin acts as a glue that sticks platelets together, forming a blood clot. The blood clot acts as a shield that protects the wound and slows or stops the bleeding.1-3

In the inflammatory stage of wound healing, immune and inflammatory cells clean up the wound and begin the process of rebuilding the blood vessels and skin.

Within hours of the injury, cells called neutrophils, which carry out both immune and inflammatory functions, move into the wound. They are the primary cells in the wound for the first 48 hours. Neutrophils cleanse the wound of bacteria and dead or damaged cells and die once they complete their work.1,3,4

Next, approximately 48 – 72 hours after the injury, other cells that carry out both immune and inflammatory functions called macrophages move into the wound. Macrophages are essential to wound healing; in fact, they are some of the most important cells during the early stages of the healing process. The macrophages finish cleansing the wound by “eating” the dead neutrophils and any remaining bacteria and dead skin cells.3,4

In addition to cleaning up the wound, macrophages also help with skin regeneration. They release growth factors (molecules that promote cell growth). The growth factor molecules then stimulate the production of cells called fibroblasts, which produce a protein called collagen that is essential to rebuilding both blood vessels and skin.1,3,4

In the healing stage of wound recovery, new skin forms over the wound; new blood vessels and connective tissue develop, and the wound edges come closer together.

Beginning 24-48 hours after the injury, skin cells called keratinocytes start to close the wound. They do this by migrating slowly from the edges of the wound toward the center, making copies of themselves along the way. They continue this process until the cells from opposite sides of the wound meet in the middle. This new layer of cells is the beginning of the new skin that grows over the wound, and it provides a barrier between the wound and the environment. However, it is delicate and easily can be damaged until healing progresses further.3,4

Within 2 – 5 days of the injury, connective tissue called granulation tissue also forms on the surface of the wound and keeps growing until it fills the entire wound. Granulation tissue consists of a combination of fibroblasts, inflammatory cells, new blood vessels, and collagen. As it grows across the wound, granulation tissue replaces the blood clot.3,4

During this stage, the wound contracts as its edges move toward each other. This facilitates the granulation tissue’s filling the wound. Wound contraction occurs because cells called myofibroblasts contract in the same manner as smooth muscles (muscles that we cannot control, such as those of blood vessels), drawing the edges of the wound toward each other.3,4

In the remodeling stage of wound healing, the wound finishes closing over and becomes strong enough to allow for complete healing. For superficial wounds, which only affect the top layer of skin, no scar is formed. However, deeper wounds may cause some degree of scarring.

During the same time, the tensile strength (ability to withstand stretching) of the scar gradually increases, meaning that the scar tissue becomes stronger and less prone to reinjury. Even with this increase in tensile strength, scar tissue is not as strong as unwounded skin. The scar reaches its peak strength approximately 60 days after the injury, and at its peak it is only about 80% as strong as normal tissue.3,5

The remodeling stage of wound healing can last for many months or even for years. This stage is responsible for the scars becoming less noticeable over time.3,5

Acne lesions are wounds, and the healing process is essentially the same as for other wounds. The exception is that there are only three stages because acne lesions are not cuts to the skin, so blood clotting does not occur.

Interestingly, research has found that inflammation that is more severe or lasts for a longer period of time increases the risk of developing scars when acne lesions heal. This risk is largely due to genetics.

As a 2010 article in Dermatology Research and Practice noted, “[This research] showed a strong relationship between severity and duration of inflammation and the development of scarring, suggesting that treating early inflammation in acne lesions may be the best approach to prevent acne scarring.”6