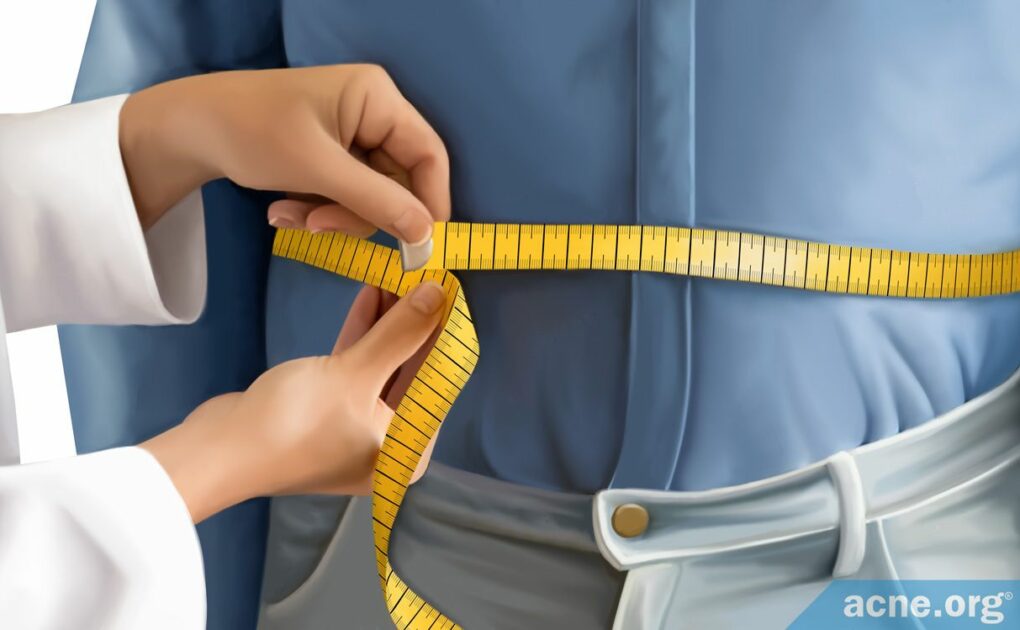 Overweight or Obese Females May Be More Likely to Develop Acne, but the Evidence for Males Remains Contradictory

Males: When it comes to males, most of the evidence so far points toward weight not being a factor in acne, but some evidence is contradictory so we can’t say for sure.

How Do You Know Whether You Are Overweight or Obese?

To determine whether a person is underweight, at a healthy weight, overweight, or obese, health professionals use a measure called the body mass index (BMI). BMI is calculated the same way for all ages and genders. To calculate your BMI, follow these steps:

The final number in step four is your BMI. According to the World Health Organization, if you are at least 20 years old, you are:

People younger than 20 years should look up healthy BMIs with respect to their age in the charts on the World Health Organization website to determine whether they are underweight, at a healthy weight, overweight, or obese.1

Is There a Link Between Being Overweight or Obese and Having Acne?

Eight studies have directly investigated whether being overweight or obese increases a person’s likelihood of developing acne and/or of his acne worsening.2-9 The studies, performed around the world, have come to contradictory findings.

On the whole, for males, the preponderance of the evidence seems to point to no connection between excess weight and acne. Here are the conclusions reached by the 7 studies that looked at males:

For females, most of the findings suggest there may be a connection between excess weight and acne. In other words, for females, being overweight or obese may make acne more likely to develop and/or more severe. Here are the conclusions reached by the 6 studies that looked at females:

Expand the section below if you are curious to get all the details of these studies.

It is important to note that even in females, the four studies that found a connection between high BMI and acne did not show that being overweight causes acne. They instead showed a correlation: in other words, they showed that females who are overweight tend to suffer from acne. Another example of a correlation would be noticing that on the days when people carry umbrellas, there are usually puddles on the ground. Of course, the umbrellas didn’t cause the puddles. Instead, both the umbrellas and the puddles are due to another factor – rain. In the same way, it is possible that another factor causes some people both to develop acne and to be overweight.

To show that excess weight actually causes acne, researchers would have to take people of healthy weight and without acne and randomly subdivide them into two groups: an experimental group and a control group. The people in the experimental group would need to gain weight, while the people in the control group would need to stay at the same weight. The researchers would then compare the number of people with acne in the two groups. If the people in the experimental group had more acne than those in the control group, then being overweight most likely causes acne. Until a study like this is performed, we cannot be confident that weight is the cause of acne in overweight or obese people. Rather, another factor may cause both excessive weight and acne.

Why Might Overweight or Obese People Have More Acne?

Being overweight or obese can cause an increase in androgens. Here’s how:

In other words, being overweight or obese may start a chain reaction, causing an increase in insulin and leading to even more weight gain and acne.

Some teen girls and women suffer from a hormonal disease known as polycystic ovary syndrome (PCOS). The name of the disease comes from the fact that females with PCOS often have small cysts on the ovaries. Although it is normal for women to produce small amounts of androgens, women with PCOS produce too much. This leads to other symptoms of PCOS, such as acne, weight gain and obesity, hirsutism (unusual hairiness), excess sebum, and irregular periods.5,11

For instance, in one of the studies we looked at above, in which researchers looked at Turkish females with acne, the researchers noticed that many more females with acne were unusually hairy, experienced irregular periods, and had cysts on their ovaries when compared to females without acne. The researchers also measured the amounts of androgens in each girl’s or woman’s blood and found that the higher the levels of androgens a girl or woman possessed, the higher her BMI and the more severe her acne was.5

Put simply, some females develop acne and also become overweight or obese because they suffer from PCOS, which causes their bodies to produce too much androgens.

A Western-style diet, filled with high-glycemic (high sugar) and processed foods, and an imbalanced ratio of omega-3 to omega-6 fats, may lead to weight gain and may therefore contribute to acne.

Some scientists have found that acne, like obesity, is a disease of Western civilization and is absent in regions where people’s diets are more “natural” or similar to those of the Stone Age.12The Stone Age, or Paleolithic Period, which represents the vast majority of human evolution, was a time when humans lived as hunters and gatherers, and their diet consisted of meats, fruits, nuts, and vegetables, with few grains, processed foods, sugar, or dairy products. In contrast, a Western diet today, which is sometimes called the Neolithic diet, typically includes high levels of processed grains, cereals, and dairy products.

Many food products which are part of the modern Western diet have a high glycemic load, which means that they are high in sugar. Consuming these foods will cause the amount of glucose in a person’s blood to increase quickly, which can lead to insulin resistance as we mentioned previously, and an ensuing hormonal chain reaction that potentially leads to weight gain and acne.12

One method of determining how eating a particular food will affect your blood sugar is to view its glycemic index, which is measured in low, medium, and high categories.13

As we have seen, insulin can set off a chain reaction leading to both weight gain and acne.

Let’s dive even deeper now. A diet with a high glycemic load may cause the body to produce certain substances called binding proteins. These substances play a part in synthesizing unsaturated (normally liquid at room temperature) fatty acids. Why does this matter? Because skin oil (sebum) that is abundant in unsaturated fatty acid is more likely to cause acne.12

The results of this study suggest that a low glycemic load diet may help reduce both excess weight and acne, but more research is needed to confirm this result. It is important to note that since the patients lost weight, we cannot be sure that the weight loss is not the reason for their improved acne. That is to say, any diet or exercise regimen that caused weight loss could have been just as effective as the low glycemic load diet in reducing the patients’ acne.

“Yo-yo dieting”: Recently, some scientists have speculated that weight cycling or yo-yo dieting, in which an overweight or obese person repeatedly loses weight and then gains it back, may also contribute to acne development.16 Weight cycling appears to cause an increase in the number of fat cells, and this sets off a chain reaction in the body. One possible result is that the body begins to produce more unsaturated fatty acid. As mentioned before, sebum that contains more unsaturated fatty acid is more likely to cause acne.17,18 However, so far, no one has conducted a properly controlled study to test this idea.

Overweight and obese women may suffer from more acne, while men may not. Acne in overweight or obese females may be due to increased insulin, a high-sugar diet, or a hormonal disease like PCOS. In addition, weight cycling may play a role, but there is currently no evidence to confirm this suspicion.