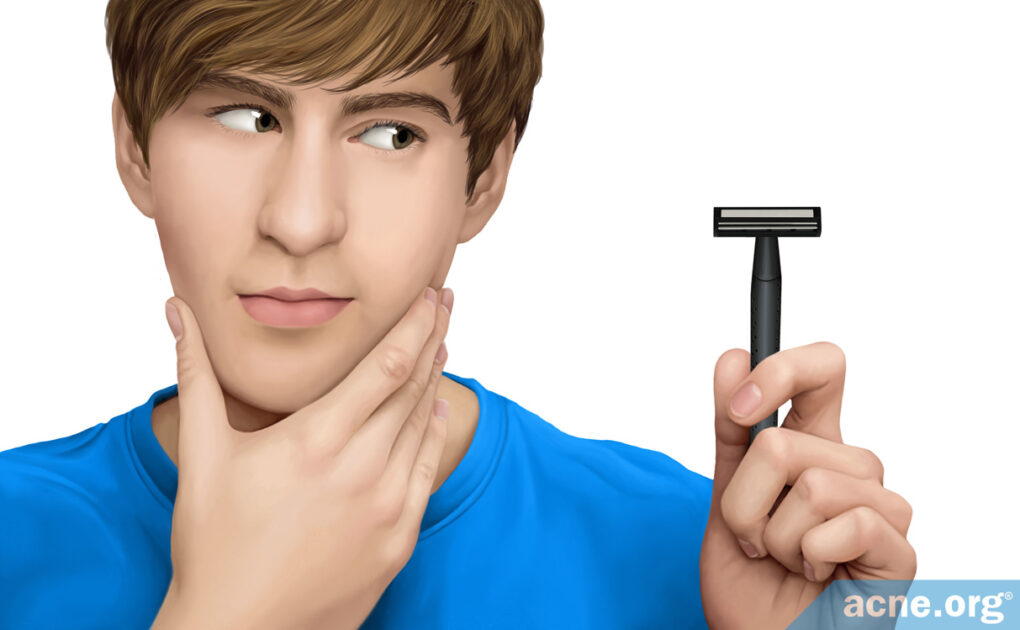 Two-blade Cartridge Razors Are the Best Choice for Most People

There is a proven link between physical irritation and acne, so finding a razor that is suitable for acne-prone skin means choosing one that produces the least irritation.

Once you have the right razor, follow these instructions for the least irritating shave.

* Acne.org is not associated with Gillette or Bic in any way

When you’re choosing the best razor for acne-prone skin, it all comes down to irritation. Irritation from shaving is so common that it has its own nickname: razor burn. Physical irritation of the skin is well-known to worsen acne, so the goal is to achieve a close shave while doing your best to avoid irritating the skin.

If you’re curious to find out why shaving without irritating the skin is so tricky, feel free to expand the section below. Otherwise, read on as we explore the best razors for acne-prone skin.

The four options for shaving on the market are:

Let’s have a look at the pros, cons, and cost of each.

Spoiler Alert: Cartridge razors with 2 blades, like the Gillette Trac II or Gillette Sensor Excel are the best for acne-prone skin and are affordable.

Our take: Although good on irritation-prone skin, the risks of getting cut outweigh the benefits.

What are straight razors?

Men have used straight razors for centuries. Straight razors are the “grandfathers” of the razors that we see on the market today. They are of two types.

Cause little irritation: Once you have mastered the craft, you can enjoy the nice, close shave that straight razors provide. Because the blade comes closely in contact with the skin and thus cuts the hair very short, it leaves no stubble. Moreover, a straight razor is one of the preferred options for shaving if you suffer from irritation and/or razor bumps.

Keep in mind, though, that once razor bumps have developed on the skin, shaving with straight razors should be avoided because the sharp blade can cut the raised, inflamed lesions. Ideally, you should switch to a beard trimmer or stop shaving entirely until the razor bumps resolve. In addition, if you have active, raised pimples, it may be best to steer clear of straight razors.

Dangerous–many nicks: Straight razors are by far the most dangerous shaving option in the sense that you are likely to nick yourself on numerous occasions before you learn how to use one properly. Straight razors feature a handle and a sharpened piece of metal that will easily nick the skin if you are even slightly careless while moving it across the skin. It takes time and practice until you are comfortable with the razor, know exactly how much pressure to apply, and become accustomed to holding the razor at just the right angle, which according to most experts is around 30°.2 “If you hold the razor too flat it will tear the stubble,” says John Rivera, a master barber. “And if held too steep, it will cut the skin.”3

Straight razors are quite pricey, especially the quality ones. Expect to spend around $130-200 on a razor and an additional $10-30 on a strop to sharpen the blade. However, a great thing about straight razors is that they are a one-time investment. You will only need to sharpen the blade with the strop thereon, and all shaving-associated expenses will be limited to the shaving cream. Since shavettes are replaceable, in that case you do not need a strop, but you will need to buy replacement blades. One replacement blade lasts for approximately five shaves and cost about $10-15 per pack of 100 (10 – 15 cents per blade), and that will suffice for about 1.5 years if you shave every day.

Cost: Initial investment $30-100, then about $10 per year for blades (shaving cream not included).

Our take: Like straight razors, safety razors are good on irritation-prone skin, but are still likely to cause nicks.

What are safety razors?

Safety razors consist of a handle and a head, where a replaceable double-edge blade is placed.

Safety razors were invented in the late 19th century, but stepped into spotlight when a man named King Camp Gillette, the founder of Gillette, signed a contract to supply US troops during World War I with the company’s innovative double-edge replaceable-blade shaving systems.3 Prior to safety razors, the only option for shaving was a straight razor, which tends to cause many nicks, especially in unskilled hands. The primary purpose of the safety razor was to reduce the level of skill involved and make the shaving experience nick-free. The art of shaving, and injury-free shaving in particular, thus opened up to more people and not only to professional barbers.4

Cause little irritation: There are no studies on the level of irritation safety razors cause to the skin, but anecdotal evidence indicates that they are minimally irritating.5 With only one blade gliding across the skin, safety razors cause little irritation, and that means you are unlikely to have acne outbreaks from shaving. It is important to remember, though, that once some pimples and/or razor bumps have already developed, it is better to avoid shaving with a safety razor until the skin clears up. Safety razors are as apt to harm active lesions as straight razors.

Many nicks: Although a safety razor supposedly is “safe,” there is still a high risk of injury while using one. Safety razors still require one to be careful in order not to get nicked. Above all, cutting at the right angle, approximately 30°, is crucial, and it takes time to master it.

Our take: In our experience, two-blade cartridge razors are the best for acne-prone skin.

What are cartridge razors?

Cartridge razors are undeniably the most popular shaving systems available today. They consist of a handle and a removable head (cartridge). The cartridge normally contains at least two blades but can hold five or more. Two-blade cartridges tend to produce the least irritation. Most people are satisfied with cartridge razors, while still quite a few people find them irritating, particularly when the cartridges contain more blades.

Minimal irritation: Irritation is rarely an issue if you use a two-blade razor. In our experience, cartridge razors like the Gillette® Trac II® or the Gillette® Sensor Excel® provide the benefit of a nice, close shave and are skin-friendly. Also, two blades may not cause hairs to retract and pierce the skin as much as cartridges with three or more blades, and that is why people using them complain less about razor bumps.

Safe and timesaving: The benefit to most cartridge razors is that you can achieve a close shave in just a few minutes because there is a lowered risk of nicks. As a result, you can shave more quickly. Put some shaving cream on wet skin, pass gently a few times, and you are ready to go. Of course, you still need to be careful, but the chances of nicking the skin with a cartridge razor are not nearly as high as with a straight razor or safety razor. In addition, you do not need to worry about the angle of shaving, and you do not need to learn the skill nearly as well as with a straight razor or safety razor. In total, cartridge razors are convenient and safe.

Irritation (if cartridges are not replaced in a timely manner): One cartridge is only good for a maximum of one month’s worth of shaves, after which time the blades become dull and should be replaced. In reality, though, many people use them longer than they should, causing dull blades trudging heavily against the skin and irritating it.

Razor bumps: Another problem is that many cartridge razors have three or more blades. In such a razor, the first blade lifts a hair up a bit, and the other blades then cut the hair. After the hair is cut, it can retract under the surface of the skin. Because the hair is now underneath the skin’s surface, it can regrow at a wrong angle, into the skin. This is particularly the case if you pull against the grain, meaning against the growth of the hair. On the face, chin, and neck above the Adam’s apple, hair grows downward, so you should shave downward. In contrast, hair usually grows upward on the neck below the Adam’s apple, so you should shave upward.

As for the associated costs, let’s do the math taking Gillette® Sensor Excel® and Fusion5® as examples.

Gillette® Sensor Excel®: The razor with a preattached cartridge plus one extra cartridge is sold for around $13. The price for a pack of ten replacement cartridges varies greatly from vendor to vendor, with an average of about $25. So, the price per cartridge equates to $25/10, which equals $2.50. One cartridge lasts for about three weeks. There are 52 weeks in a year, so you need at least 17.33 cartridges per year (52/3 = 17.33). That makes the annual cost $2.50*17.33, which equals $43.33 per year after the initial investment of $13.

Cons: Last only for two to three shaves.

Our take: Disposable razors are fine in a pinch, but two-blade cartridge razors are superior.

What are disposable razors?

Disposable razors are plastic razors that you throw away after a few uses. They usually feature one or two blades and rarely three or more. After two to three shaves, the blades dull, and the entire razor is thrown away. Regarding how much irritation they cause, it is impossible to generalize because there are many cheap, low-quality options that should be avoided. At the same time, there are some options that cause little irritation. For that reason, we will abstain from labeling the disposable razors irritating or non-irritating.

Safe and timesaving: Disposable razors are comparable to cartridge razors in terms of safety and the amount of time you need to shave. They can provide a close shave in just a few minutes with little risk of nicking your skin.