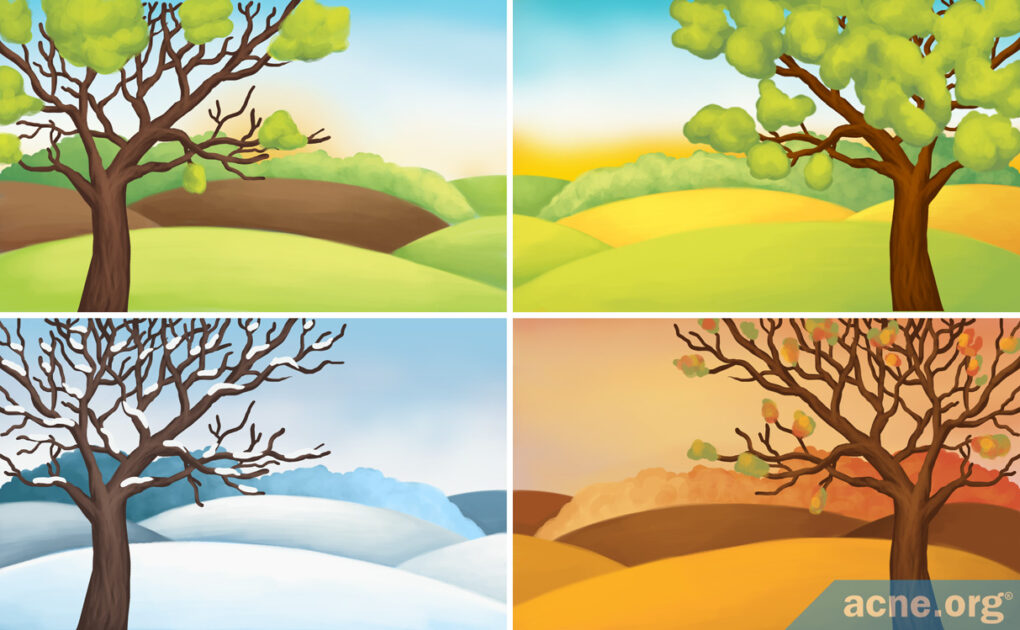 Evidence Is Conflicting and We Simply Cannot Say

Researchers have performed over a dozen studies that look at which season is worst for acne. The results of these studies are conflicting, and the answer is not yet definitive.

Sometimes this is how it goes in science. You just gotta wait for more evidence to trickle in. Read the full article below if you’re curious about the hypotheses that scientists have put forward for why acne might worsen in the summer or the winter. But keep in mind as you read that nobody knows the real answer to this question.

Study results on what season tends to coincide with more acne are a mixed bag:

So, as we can see, it’s too early to confidently confirm any answer to which season is worst for acne.

Study Limitations Make It Hard to Draw a Conclusion

The various studies listed above used participants with different genders, ages, and geographical locations. This variety makes it impossible to effectively compare the research in order to draw conclusions about which season is worst for acne. Therefore, we will need more carefully controlled research with what is called a “standard research population” in order to determine if acne worsens during a particular season.

If acne does in fact get worse in the summer or winter, why might this be so? Let’s start with arguments why acne might worsen during summer and improve during winter.

Summer tends to bring higher temperatures and increased humidity, so these are the two main suspects. Specifically, scientists speculate that humidity might increase acne by:

Winter is typically a time of lower air temperatures, lower humidity, and less intense sunshine (although this will depend on your geographical location). Therefore, we might expect the opposite effects on the skin from what we see in the summer:

However, as we have seen, some research finds the opposite, that acne might actually worsen in the winter and improve in the summer. Next, let’s look at the arguments why acne might worsen during winter and improve during summer. As you will see, there are still some puzzling inconsistencies.

Scientists have concluded in four separate studies that the UV radiation from the sun may explain acne clearing in some people during the summer months, specifically by:

The combination of anti-inflammatory light and a reduction in C. acnes could explain the observations that acne sometimes clears during the summer season. However, we will need more research to confirm these preliminary findings.1,6,27-29

There is not yet enough evidence to support the idea that acne worsens during a particular season. Scientists will need to perform more rigorous and controlled research before we can conclude anything definitively.