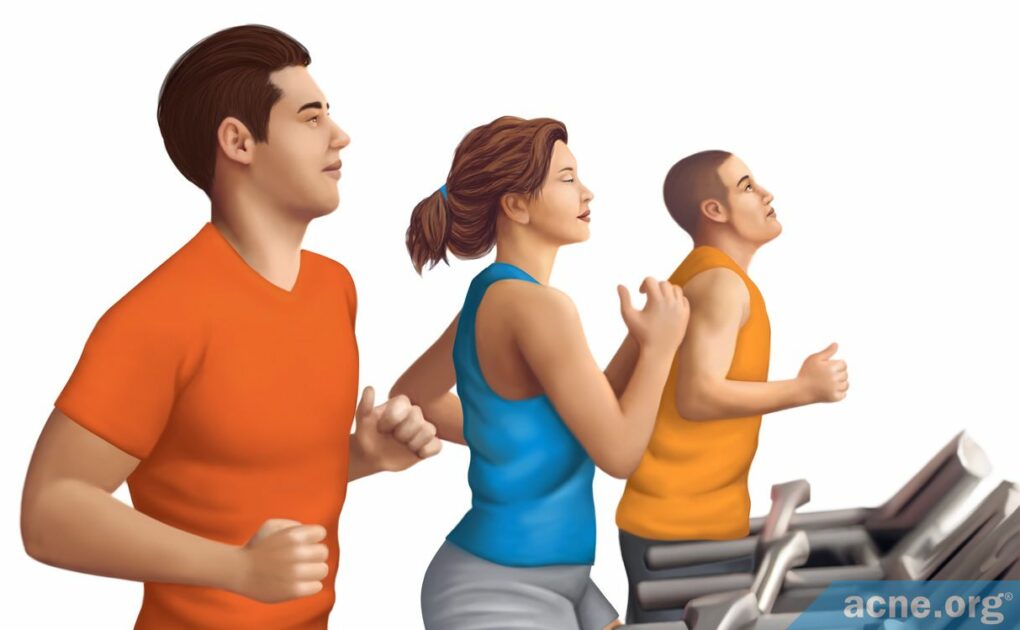 Regular, Moderate Exercise May Be Beneficial

While there are still no studies that look directly at the impact of exercise on acne, indirect evidence points toward a possibility that regular, moderate exercise may improve acne to some degree through improved wound healing and a reduction in inflammation. Since acne lesions, medically speaking, are wounds, and acne is an inflammatory disease, it makes sense that exercise could help.

Exercise is also the best way to keep stress levels under control. Since stress and acne are connected, a regular exercise routine could also help keep acne in check by stabilizing emotions.

Don’t Overdo It: Suddenly starting to engage in intense exercise can overwhelm the body and may have the opposite effect. Start slowly, and work your way up to a more demanding exercise routine.

What about Sweat? Don’t worry about sweat. There is no reason to believe that sweat would have any detrimental effect on acne. In fact, sweat contains a chemical called dermcidin that may help to control acne bacteria.

There is no direct scientific evidence indicating what effect exercise has on acne. However, indirect evidence suggests that, in general, exercise does not make acne worse and in fact may be beneficial. Let’s have a look at some of the ways exercise might help with acne-related issues.

Acne lesions are essentially small wounds. Impaired wound healing can cause pimples to heal more slowly and can make scarring from acne worse.

The Studies: Two studies on mice provide some indirect evidence suggesting that exercise might help the body heal more quickly. While results from animal studies often do not predict human results, these studies show that exercise may improve wound healing, at least in some animal models.1,2

Exercise might help reduce this inflammation, and thus combat acne, by enhancing the natural antioxidant mechanisms that cells use to transform free radicals into harmless molecules.

Scientists also speculate that exercise might help reduce inflammation in the body by promoting the growth of beneficial bacteria in the gut. Recent research suggests that gut bacteria can regulate the immune system and might thereby improve inflammatory diseases like acne.4

On the other hand, sporadic, intense exercise may actually lead to more oxidative stress and therefore might increase inflammation.5

So does this mean you should avoid intense exercise? No. It simply means if you wish to engage in intense exercise, you should slowly up the intensity. For example, one study showed that intensive exercise itself does not appear to increase inflammation, as long as the exercise is regular and progressive rather than sporadic.6

The more stressed out we are, the more likely breakouts become. Deep breathing, meditation, and prayer can all help reduce stress, but exercise is far and away the most effective way to reduce stress. A regular exercise routine is unlikely to completely clear up acne, but it may help.

From the evidence we have, sweat should not make acne worse. One small study published in 2008 found that exercise-induced sweat had no effect on acne.7

While the study mentioned above showed no effect, some evidence indicates that sweat itself may actually help fight acne. Sweat contains a chemical called dermcidin, which is released constantly from sweat glands. Dermcidin possesses antibacterial properties that can kill several types of bacteria, including acne bacteria (C. acnes). Some researchers hypothesize that dermcidin helps keep C. acnes populations under control.

Exercise has many known health benefits to the body. With respect to acne in particular, regular, moderate exercise may be beneficial by promoting wound healing, reducing inflammation, and keeping stress under control.

Additionally, sweat contains a chemical called dermicidin which has antibacterial properties that can kill acne bacteria, which might, in turn, improve acne symptoms.

Just don’t overdo it. Start slowly and ramp up your intensity gradually.