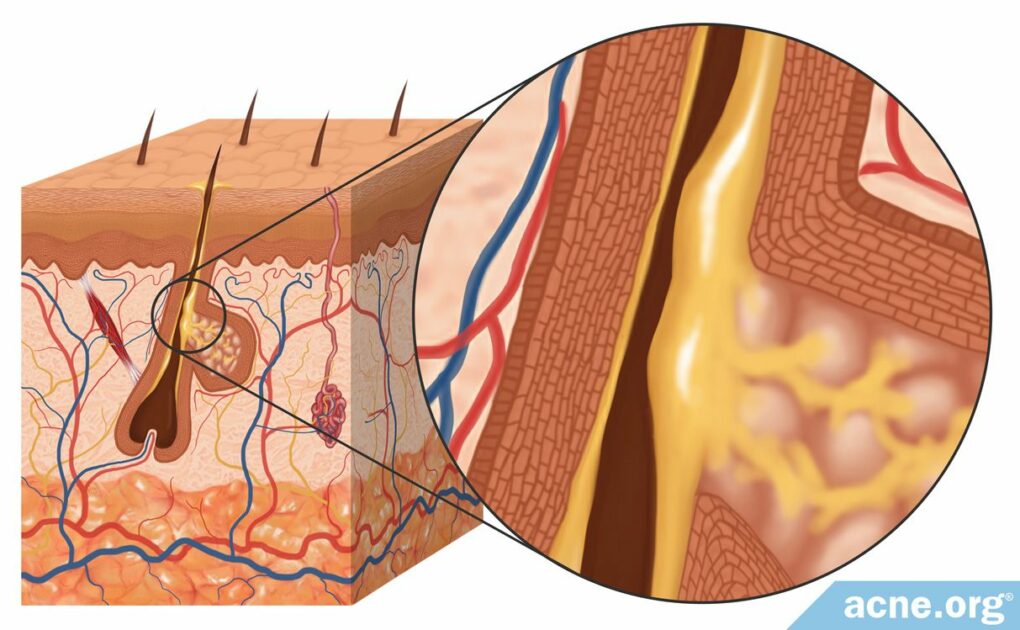 Sebum Is the Medical Name for Skin Oil. It Contributes to Acne, but Also Maintains the Integrity and Function of the Skin.

Sebum (skin oil) is essential to maintaining the integrity and function of the skin and hair in mammals, including humans. Its purposes include:

Too Much Sebum Makes Acne Worse: It is accepted science that skin that produces an excess amount of sebum is more prone to acne. This explains why acne occurs at stages in life, like puberty, when the production of sebum can go into overdrive.

Sebum (skin oil) is often seen as an annoyance because too much sebum usually leads to more acne. However, the sebum which coats the skin and hair of all mammals is important. Produced in glands called sebaceous glands, which surround hair follicles, sebum moisturizes and waterproofs the skin, protects it against cold and microorganisms, and distributes antioxidants and hormones on the surface of the skin.

This article will go into detail regarding the components and functions of sebum and how sebum is associated with acne. If you just want a “bottom line” it’s this: more sebum means more acne.

The fats in human sebum include:

Researchers suggest that the individual differences in sebum composition may hold the key to a person’s chemical signature, potentially showing how dogs can recognize people after sniffing them.4

Sebaceous glands are already formed and actively producing sebum while we are still in the womb. In fact, sebum is a major component of the white substance called vernix caseosa that covers newborn babies.2 Vernix caseosa is theorized to help moisturize the fetus’s skin and make the passage through the birth canal easier, while conserving heat, protecting the skin, and providing antibacterial effects for the newborn.

Throughout the lifespan of all mammals, sebum serves complex protective functions, including:

Additionally, scientists speculate that sebum might be helpful in protecting us from the sun’s ultraviolet (UV) rays. This potential role of sebum is still controversial and requires further research. For now, scientists theorize that when UV rays from the sun hit the skin, some lipids in sebum convert into free radicals, which are natural toxins that can trigger inflammation. In large amounts, free radicals can contribute to acne and cause skin damage. However, researchers think that small amounts of these free radicals might actually be beneficial by alerting the immune system to fight against UV damage.4

Only mammals have sebaceous glands, and thus, sebum. In humans, sebaceous glands are found on all parts of the body, except on the palms of the hands and soles of the feet. They are most abundant on the face, particularly in the T-zone, followed by the neck and shoulders, and they are abundant also on the back and chest. The number and activity of sebaceous glands also varies with age and gender.5

Sebaceous gland development and function are controlled throughout life by androgens, which are male hormones present in both males and females.

Sebaceous glands are filled with specialized cells known as sebocytes. Sebum accumulates inside these cells, causing the cells to burst, releasing their contents into the hair follicle (pore). The sebum then slowly travels up the pore until it reaches the surface of the skin.6

Sebocytes not only produce sebum, but together with skin cells they act as an immune organ to fight against invading microbes. On recognizing specific bacteria, such as C. acnes (acne bacteria), sebocytes and skin cells can react by altering the lipid composition of sebum and also by producing inflammatory and antimicrobial molecules to fight the “invaders.”7

In the womb, maternal androgens regulate the development of sebaceous glands in a growing embryo. Once developed, the number of glands that an unborn baby has then remains about the same throughout life, but they increase in size.2

High levels of androgens are seen from birth to about one week of age, with a corresponding high level of sebum production, after which androgens and sebum production normally subside. This surge in androgens sometimes leads to baby acne, which subsides by 6 months of age.

Sebum production then increases again from about age nine, when the body starts producing androgens to prepare for puberty, until about 17 years of age, when androgen levels in adults are reached.

The pituitary gland, located in the brain, is a master gland that controls hormone production. However, interestingly, sebaceous glands themselves also produce androgens.2

The Role of Sebum in Acne

Studies also have shown that individuals who have acne display changes in the ratios of sebum lipids as well as in the composition of these lipids. For instance, people with acne tend to have fewer anti-inflammatory lipids in their sebum and more squalene, a pro-inflammatory (produces inflammation) lipid, in their sebum. Since acne is primarily an inflammatory disease, this change in lipids may be part of the development or worsening of acne.

The changes in sebum lipids seen in people who develop acne also may also stimulate keratin production. Keratin is a sticky protein that makes up much of the skin. In other words, sebum with an imbalance of lipids may cause the skin to become thicker and stickier, thus leading to pore clogs and pimples.

Early studies found that people who had acne also had a decreased amount of a protective lipid called linoleic acid, in their sebum. The researchers postulated that low levels of linoleic acid were involved in increased skin cell formation in the pore, which contributed to the development of clogged pores. Low levels of linoleic acid also reduce the barrier function of the skin as well, which can make it is easier for inflammatory substances to penetrate the pore, perhaps leading to more acne.8

Most significantly, these changes in lipids, in combination with excess sebum, create an ideal environment for acne bacteria (C. acnes) to grow and multiply.3 Acne bacteria leads to more inflammation in the skin, and can make the redness and soreness of acne lesions worse.

The fact that sebum contributes to the development of acne is supported by the fact that isotretinoin, an acne medication which destroys sebocytes, is effective in treating acne. Furthermore, hormonal therapy such as oral contraceptives and anti-androgens like spironolactone that reduce androgens in women, are known to reduce sebum levels and acne as well.2