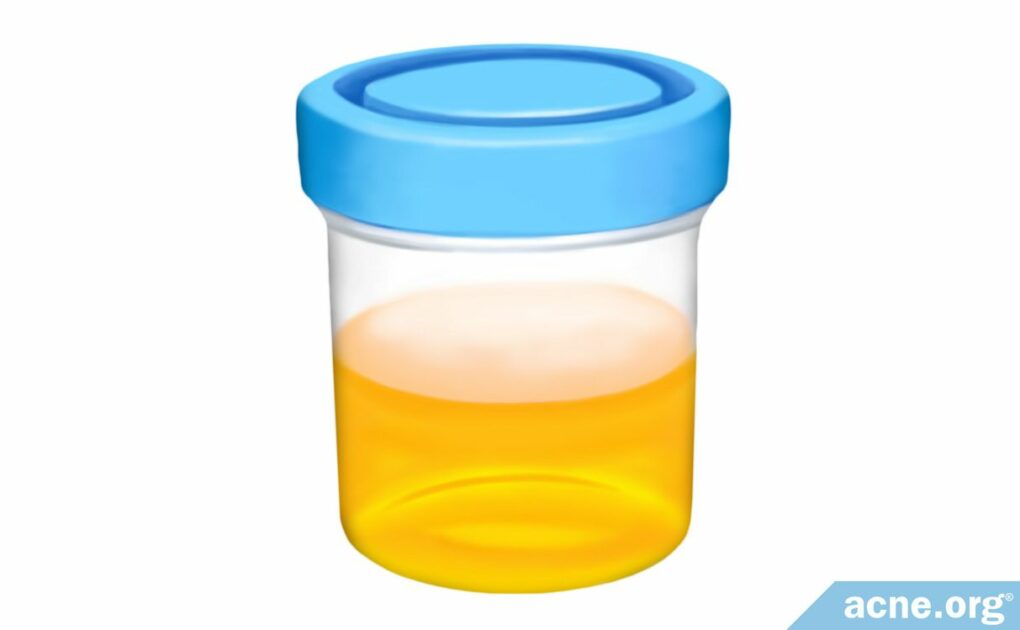 Yes, believe it or not, people try treating their acne with their own urine. However, there is no evidence to date to support the topical application of urine on acne lesions, and the risks outweigh the potential benefits.

Preliminary evidence suggests fresh urine may prove to be antibacterial against acne bacteria. However, applying it topically may end up increasing the risk of skin infection, particularly if open wounds–including popped or picked acne lesions–are present.

Some compounds in urine may also help strengthen the skin barrier, help with wound healing, and enhance skin permeation, all of which could potentially be of benefit to acne. However, other compounds present in urine, like uric acid and ammonia may cause skin inflammation, and since acne is at its core an inflammatory disease, this could make acne worse.

Some people use urine therapy as an alternative and free treatment or acne. Urine consists mainly of water but also contains a compound called urea as well as salts in small amounts. Whether this “watered-down” mixture can help acne is unclear, but based on what we know about the compounds and properties of urine, it is unlikely to help.

Although urine therapy is unusual in modern-day, conventional medicine, people used it throughout history to treat skin disorders. In the ancient times, urine was revered as the “gold of the blood” and “elixir of long life.” Ancient Greek doctors used it to treat a variety of skin conditions, including burns and eczema, but today’s doctors typically do not.1,2

The kidneys produce urine as a byproduct of the body’s waste removal system. The composition of urine generally is similar among individuals, differing slightly depending on diet, water intake, and the presence of disease. Urine typically is 96% water, 2% urea, and 2% other dissolved substances.

Pharmaceutical companies first created a synthesized version of urea in 1828, and synthetic urea is now used in a range of skin products used to treat dry and rough skin conditions. These products contain 3% – 50% urea.3

In addition to urea, urine contains 2% other dissolved substances, including electrolytes, uric acid, and ammonia.2

Possible Positive and Negative Effects of Urine on Acne

There is little data on the direct effect of urine when used specifically on acne. One case report appeared in 2015 in The Journal of Clinical and Aesthetic Dermatology describes a severe worsening of acne after urine was applied.4

In this case report, the researchers described a 16-year-old male who decided to try urine therapy for his acne after hearing about it on TV and reading about it online. Initially, the teen applied fresh urine to his face, but he soon began to collect and store urine for later to make the treatment more convenient. He stored the urine at room temperature, and soon after he started treating his skin with the stored urine, he experienced a severe acne flare-up. The authors of the case report believed that the stored urine may have become a breeding ground for bacteria.

The teen stopped using urine therapy and was treated with antibiotics, topical tretinoin, and benzoyl peroxide. After three months, his skin was almost completely clear of acne. The case report authors wrote, “The patient [stopped] further urine treatment and, besides feeling embarrassed by the situation, he was relieved to be doing better.”4

This case report suggests that urine therapy, at least with stored, unrefrigerated urine, could actually make acne worse. However, this is just one patient’s experience and does not give us enough information to draw conclusions.

However, the available research on the components of urine may help us understand whether the topical application of urine is likely to help heal acne or not.5-11

Research shows us that some of the compounds in urine could have potential positive effects on acne. However, most of these effects are only seen at higher concentrations that are found in urine, or in combination with other substances that are not found in urine. This weakens the potential of urine to help with acne to a measurable degree.

Some compounds found in urine may have potential negative effects on acne. However, these effects are only seen at higher concentrations that are found in urine, so whether urine will in fact cause a measurable increase in inflammation is unclear.

What is Our Takeaway?

Aside from potentially killing acne bacteria, urine likely does not contain enough “active” compounds to help with acne in other ways. When we consider that urine contains compounds that may contribute to inflammation, even to a small degree, it is unlikely that urine, as a whole, would be beneficial for acne.

To be sure that we’ve uncovered every stone, let’s look more closely at each potential effect of urine. [Warning: We’ll be getting quite scientific – but it’s still pretty interesting.]

C. acnes bacteria aggravates acne, and therefore the antibacterial activity of urine may be relevant in the treatment of acne. One initial experiment found that urine might reduce C. acnes, but more research is necessary to confirm this result.11

At 3 – 10%, urea binds to proteins that otherwise block stratum corneum skin cells, called corneocytes, from binding to water molecules. Consequently, urea at these concentrations helps the skin to retain moisture.5,6

At 10 – 30%, urea can cause flaking and peeling of corneocytes.6 This continuous peeling may help prevent clogged pores that can lead to acne.

Overall, urea may be helpful in the treatment of acne by improving skin barrier function and reducing clogged pores. However, at the 2% concentration found in urine, urea would not demonstrate these same effects.

The wound healing process is important when it comes to acne. Acne lesions essentially are skin wounds, and slow healing of them can lead to hyperpigmentation (dark/red spots).

The cosmetic industry uses synthetic urea at higher concentrations to stimulate cell regeneration and promote wound healing.6 However, it is unclear whether urea at the concentrations found in urine demonstrates the same effects or not.

Urine also contains small amounts of electrolytes (salts), which may affect wound healing. Scientists have not examined the effects of topical application of salt. However, researchers found in one in vitro (in the laboratory) study that rinsing the mouth with a salt water solution promoted healthy gums and improved oral ulcer healing.10 Could the salts in urine confer the same effect on the skin? We would need studies before we could say for sure.

From the research thus far, urea at 10% concentrations in skin products may help topical medicines penetrate the skin better. Scientists believe that urea facilitates skin permeation by changing the structure of keratin, a protein found between skin cells. This way, urea creates space between these cells, enabling other substances to pass through easily.5

The body uses antioxidants to ward off inflammation and cell damage caused by oxygen free-radicals, a natural byproduct of the body’s metabolism of oxygen. Because researchers believe that acne may be in-part triggered by an overload of these molecules, urine’s antioxidant properties might help with acne.

Acne is, at its core, an inflammatory disease. Two components of urine, uric acid and ammonia, may cause skin inflammation.

Uric acid is a substance that results from the body’s metabolism.7 Scientists have shown that excess uric acid within the body can lead to inflammation. An example of this is gout. Gout is a disease in which uric acid crystallizes in joints, causing arthritis. Data on the inflammatory effect of uric acid that is dissolved in water or blood, as opposed to crystalline deposits in joints, is unclear. Additionally, researchers have not examined the effects of the topical application of uric acid. More research is needed, but it is possible that it induces skin inflammation.8

Ammonium is another byproduct of the body’s metabolism, specifically of proteins. It is an irritant whose inflammatory effects are due to its high pH (alkalinity). If you were to apply ammonium to the skin, the ammonium would react with water on the surface of the skin to form hydrogen hydroxide, a compound that can cause chemical burns.9 Though urine does not contain high enough concentrations of ammonium to cause burns, it is possible that it triggers inflammation of the skin and impairs its barrier function.

Overall, more research is needed, but information suggests that components of urine may lead to skin inflammation, which could worsen acne.

Risk of Infection and Side Effects

One concern about using urine to treat acne is the risk of skin infection, especially if it is applied to open sores – and acne lesions can be open sores. Urine initially is sterile, but bacterial colonization can occur in a matter of hours. The risk of infection is highest if one uses urine that has been stored for any amount of time and if it is applied to damaged skin, such as skin with a popped pimple or a pimple that has been picked.

Authors from the 2013 Dermatology Online Journal concluded, “Application to a compromised skin barrier, such as that seen in inflammatory conditions like acne and atopic dermatitis, may leave patients susceptible to both topical and systemic infections.”5

Data suggests the risk of other side effects is minimal. Urea may cause inflammation and water loss in the skin at concentrations of 20% and more but is unlikely to cause irritation at the concentration found in urine.

Pharmaceutical companies commonly study urea in order to determine its safety in skin care products, and irritation has not been reported, even in damaged skin. Scientists who conduct these studies do note, however, that urea may cause irritation if applied to an open wound or if paired with an improper cosmetic base. But overall, it is unlikely to cause allergic reactions or irritation.3,6 As we discussed, ammonium and uric acid may increase inflammation, but more research is needed.