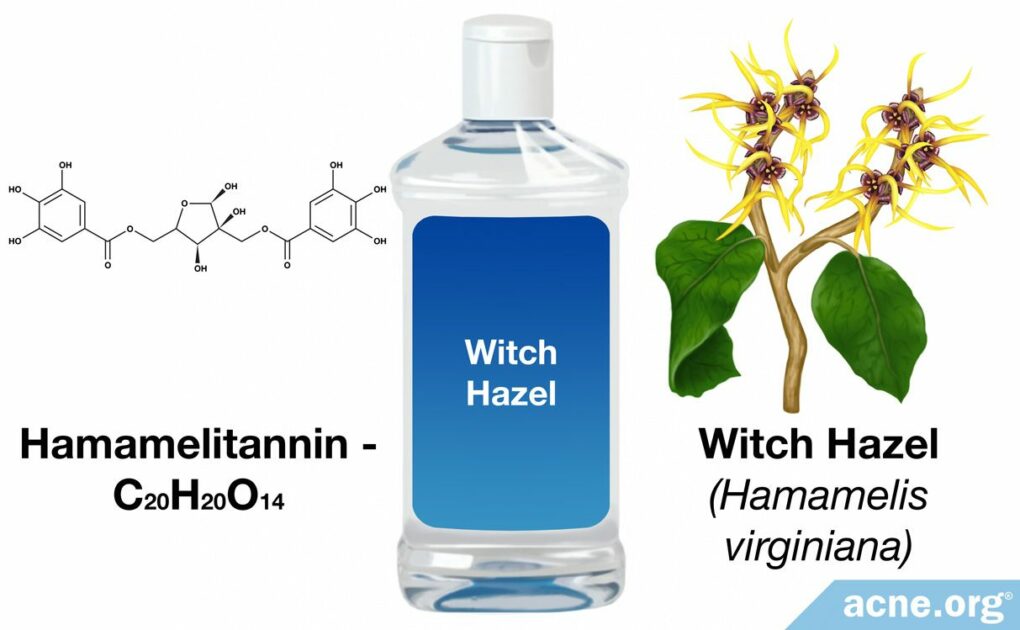 Witch Hazel Is Mildly Antibacterial and Anti-inflammatory, But We Don’t Have Enough Evidence to Know if It Will Help with Acne

Witch hazel is an astringent, which basically means it tightens and dries out the skin. Using witch hazel, particularly on oily skin, imparts a “fresh” and “clean” feeling. However, the activity of witch hazel is relatively weak, and evidence doesn’t point toward a major benefit for acne-prone skin.

Researchers have never studied either form of witch hazel for treating acne, so we don’t know if they would help. Even if they did, it’s unlikely they would provide dramatic clearing of acne.

Witch hazel water shows the most promise for acne treatment because it may be:

The Bottom Line: Witch hazel is unlikely to dramatically clear the skin, but if you want to try witch hazel on acne, try witch hazel water, which is normally packaged in large bottles of clear watery liquid and is available at most drugstores. Make sure to stay realistic and don’t expect it to provide substantial improvement in acne.

Witch Hazel and Its Potential for Healing

Witch hazel (Hamamelis virginiana) is a shrub native to eastern North America. For centuries, Native Americans treated a variety of medical conditions with pastes and water that contained extracts of the bark and leaves of the witch hazel plant.

The pharmaceutical industry first commercialized witch hazel water in the late 1800s, and modern manufacturers of skin care products still use witch hazel in a variety of products designed to treat skin conditions like varicose veins, hemorrhoids, eczema, and psoriasis.1,2

Witch hazel comes in two forms, (1) witch hazel water, and (2) witch hazel cream, and they differ in their chemical compositions and potential for acne treatment.

Witch hazel water is what you might commonly purchase at the drugstore and is the type of witch hazel you should opt for if you want to try witch hazel for acne. Manufacturers create witch hazel water by distilling witch hazel leaves and bark into a solution of 13 – 15% alcohol. The distillation process does not preserve compounds in witch hazel called tannins, which have antioxidant properties. However, it does still contain high levels of molecules called polysaccharides. Polysaccharides can be anti-inflammatory and antimicrobial, both of which may be beneficial to acne. Witch hazel water also most likely does not clog pores.

Data from studies on witch hazel water shows that it may exhibit the following properties:

Expand the drawer below to look at research on witch hazel water.

Now let’s look at the science regarding witch hazel cream, which is less commonly available at drugstores.

Data from studies on witch hazel cream shows that it may exhibit the following properties:

Expand the drawer below to look at research on witch hazel water.

Alcohol – another concern: Products that contain witch hazel water usually contain alcohol, and the jury is still out on the safety of alcohol on human skin, particularly when used regularly.

How to Use It

Witch hazel can be applied 1 to 2 times per day, starting with once a day. After several days of use at once per day, you can increase to twice per day.

Witch hazel water works best on oily skin due to its astringent properties. Before applying witch hazel water to your entire face, do a spot test first, especially if you have sensitive or dry skin. Apply a small amount to an inconspicuous spot, like the jaw line. Wait 5 to 10 minutes to see if there is any reaction in the skin. If there is a reaction (such as redness, itchiness, or a rash), discontinue use and avoid using witch hazel on your face.

If there was no adverse skin reaction in your spot test, and you still want to try witch hazel as a toner, proceed with the following simple steps: