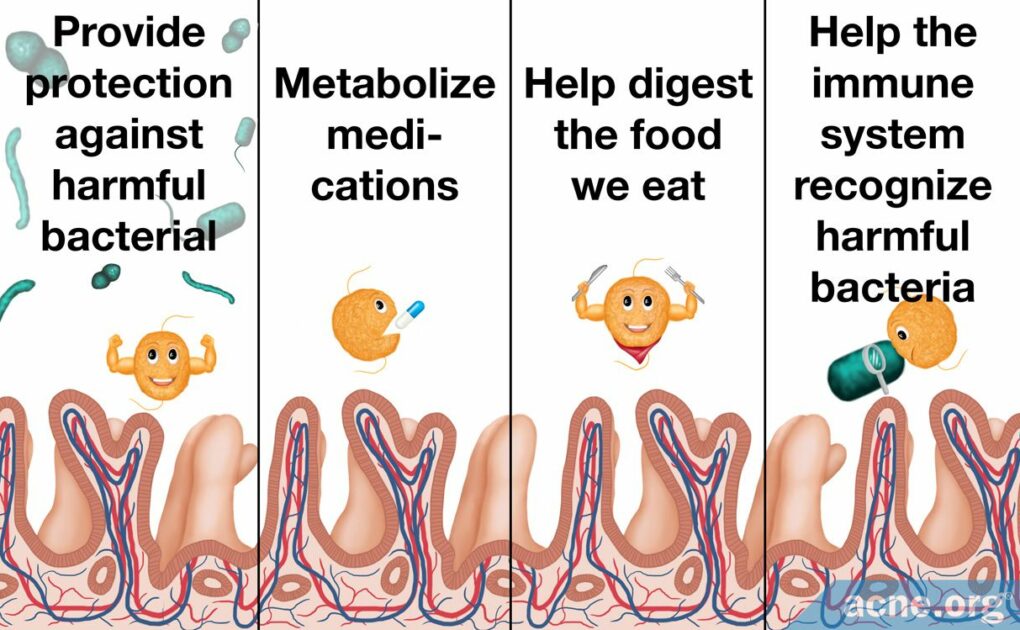 Trillions of bacteria live peacefully in our bodies and help to keep us healthy. Among other functions, these good bacteria help digest our food and help our immune systems recognize and fight off harmful bacteria.

Despite their unimpressive effectiveness, oral antibiotics are sometimes prescribed for acne. When oral antibiotics disrupt the balance of bacteria in the body, side effects such as nausea and diarrhea can occur. In addition, when antibiotics kill good bacteria, this causes many other problems, including overgrowth of harmful bacteria that can cause disease, and antibiotic resistance.

Be Your Own Advocate: If your doctor prescribes an oral antibiotic for your acne, do not simply accept it. Be sure to ask about alternatives.

Despite declining popularity amongst both doctors and acne sufferers due to their incomplete efficacy, ability to provide only temporary relief, and worrying side effects, oral antibiotics remain a common acne treatment.

One of the ways antibiotics cause the most harm is through their ability to kill good bacteria and disrupt the balance of bacteria in the gastrointestinal tract. Since good bacteria perform important functions, the resulting imbalance causes health problems.

Doctors sometimes prescribe oral antibiotics for severe acne, truncal acne (acne on the chest and back), and moderate acne that does not respond to topical (applied to the skin) medications.

The most commonly prescribed oral antibiotics for acne are:

Common Side Effects of Oral Antibiotics for Acne

Because oral antibiotics kill not only bad bacteria but also good bacteria, they cause a variety of side effects, including gastrointestinal distress such as nausea and diarrhea. They can also reduce the ability of the body to absorb vitamins and medications, increase vulnerability to infections, and allow an overgrowth of harmful bacteria.

What Are Good Bacteria and What Is the Microbiome?

We take antibiotics to kill bacteria that are harmful. However, not all bacteria are harmful. In fact, many trillions of bacteria live in and on our bodies and play an important role in keeping us healthy. Scientists estimate that the human body has 10 times more cells from bacteria than human cells. Most of these species live in the gastrointestinal tract, especially in the colon.3,5

According to a 2010 article in Microbiology, “Practically all surfaces of the human body exposed to the environment are normally inhabited by [microbes]. The intestine constitutes an especially rich and diverse microbial habitat. Approximately 800-1000 different bacterial species and >7000 different strains inhabit the gastrointestinal tract.”4

Bacteria that live in the gut in particular help digest food, produce vitamins, and maintain healthy intestines. In addition, gut bacteria in a developing fetus are necessary for it to develop a normal, healthy gastrointestinal tract. Gut bacteria help the developing intestines to form the blood supply, immune system, and intestinal barrier. The intestinal barrier is a protective layer of cells that allows the intestinal wall to absorb nutrients from food while at the same time keeping harmful bacteria out. Because the gut is always processing the food we eat, the protective layer of cells needs to be renewed constantly in order to keep the barrier intact. Normally, the barrier can be completely renewed within a week, but without good bacteria, it takes twice as long. In another example of how important these bacteria are, studies have shown that the intestines develop abnormally in mice that have no bacteria in their guts. As we can see, good bacteria are essential to healthy gut function.4,7

Good Bacteria May Play a Role in Skin Health

Studies show that people with acne have fewer different types of gut bacteria compared to people without acne, so scientists speculate that having less variety of good bacteria in the gut can make a person more vulnerable to developing acne.8

As for the role that the brain plays in this theory, researchers speculate that psychological stress may change the activity of gut bacteria, causing them to trigger inflammation, which can worsen acne. Scientists wonder whether this might explain why stress sometimes goes hand-in-hand with acne flare-ups.8

According to a 2019 article in the Journal of Clinical Medicine, “Until recently, diet and psychological stress were thought to have little relevance to the [development] of acne. However, with the understanding that the brain-gut-skin axis exists, it is now clear that intestinal microbes have significant effects on acne.”8

Treating Acne with Antibiotics Might Worsen Acne in the Long Term

Considering that an imbalance in gut bacteria may contribute to acne, treating acne with antibiotics may come with pros and cons:

What Can Go Wrong When Antibiotics Kill Off the Good Bacteria?

Because oral antibiotics kill bacteria indiscriminately, they change the balance of bacteria in the gut, which can lead to problems, including the many side effects associated with antibiotics, particularly gastrointestinal upset.

The Loss of Colonization Resistance

Since the 1950s, evidence has been accumulating that when antibiotics kill good bacteria and change the balance of the microbiome, this can lead to infections by something called “opportunistic pathogens.” Opportunistic pathogens are microbes that normally live in the body without causing problems but that take advantage of an imbalance in the microbiome to cause infection. Antibiotics give opportunistic pathogens an opportunity to cause harm. Normally, good bacteria prevent the growth of harmful bacteria. This prevention strategy is called colonization resistance, meaning that the good bacteria prevent harmful bacteria from taking up residency in the gut. When antibiotics kill good bacteria, harmful bacteria can grow and cause disease. For example, antibiotics such as oral clindamycin can lead to overgrowth of C. difficile, a strain of bacteria that is responsible for gastrointestinal problems such as diarrhea and colitis (inflammation of the colon). C. difficile can cause severe, life-threatening diarrhea.3,9

Oral antibiotics can literally be lifesavers when they are absolutely required to cure a disease. However, particularly when taken for long periods of time, like they often are in acne patients, they can become harmful. If your doctor prescribes antibiotics for your acne, ask her if there are other options that could help that are as effective with less side effects.