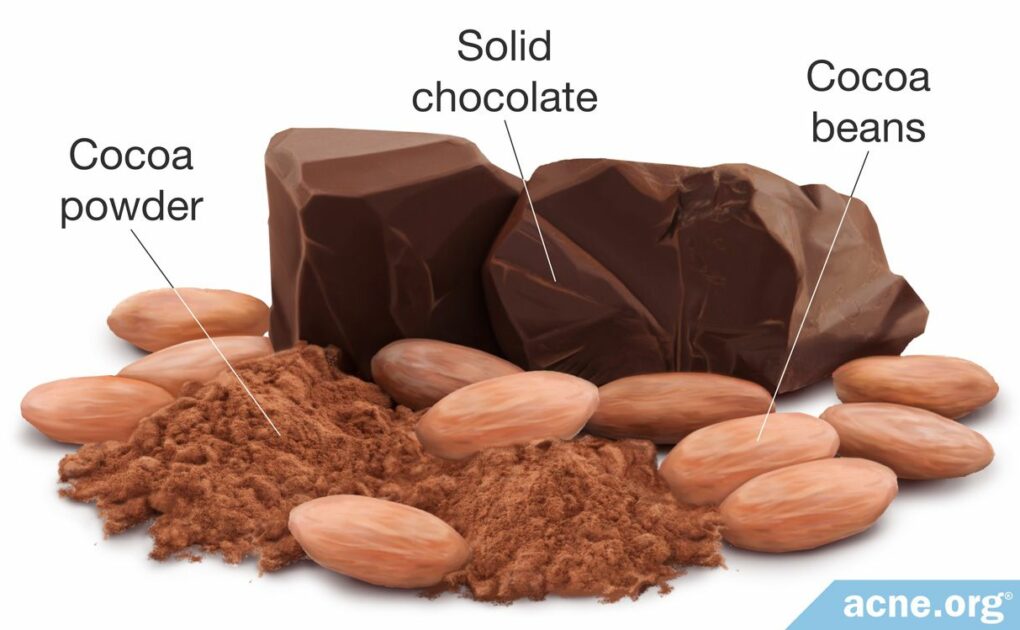 Some Evidence Is Beginning to Show that Chocolate Might Increase Acne Symptoms, But It Is Too Soon to Say for Sure

The first study on chocolate and acne, published in 1969, concluded that chocolate had no effect on the severity of acne, and despite several serious design flaws in the study, this was generally accepted as fact for decades.

After almost 50 years of no further research, interest in the potential effects of chocolate and acne resumed in earnest in 2011, and since then researchers have performed nine more studies, with all of them demonstrating a weak relationship between chocolate consumption and an increase in acne. However, all of these more recent studies also had their own limitations, so it is still too soon to say for sure whether chocolate increases acne.

All Things in Moderation: Eliminating chocolate from the diet is unlikely to result in a noticeable decrease in acne. It is safe to enjoy the occasional chocolate treat based on the evidence we currently have, but it may be best not to overdo it. All things in moderation.

Chocolate is typically made with sugar, milk, and cocoa butter, all of which might hypothetically increase acne.

On the flip side, chocolate contains antioxidants called flavonoids, which might hypothetically decrease acne.

So will chocolate increase or decrease acne, or for that matter, have no effect?

The best way to know the truth is to look at scientific studies. And here’s where it gets interesting. One flawed study in 1969 led to decades of runaway rumors that chocolate and acne are not connected.

How the rumors started: One initial and flawed study in 1969 found no connection between chocolate and acne. Since this was the only evidence available, everyone from dermatologists to medical textbooks seemed to get in line, repeating that chocolate has no effect on acne. The rumor mill continued until 2011, when research into chocolate and acne resumed and nine new studies all found a weak connection.

Let’s start by looking at the initial 1969 study that got the whole world saying chocolate does not affect acne, and see why its conclusions are suspect.

1969: No Relationship Between Chocolate and Acne

In 1969, a study published in the Journal of the American Medical Association first explored the relationship between chocolate and acne.

The study included 35 young adult male prisoner volunteers in addition to 30 male and female adolescents. The participants were given either a chocolate bar or a placebo bar. The placebo bar was a bar that looked and tasted like chocolate but contained no chocolate. At the end of the study, the researchers concluded that chocolate had no effect on acne severity.1

This study took on a life of its own, with other researchers often citing it in other scientific literature, and its conclusions remained unchallenged for decades. However, in 2011, a closer inspection of the 1969 study’s design and methods discovered many worrying limitations, including:

Due to the design flaws of the study, its conclusions are now widely seen as unreliable.

Since 2011: Weak Relationship Between Chocolate and Acne

Beginning in 2011, scientists began taking a fresh look into chocolate and acne and have published nine new studies, all of which have found a weak link.

We will go through them one by one now. However, as you read, keep in mind that studying the effect of diet on any disease is difficult, and so conclusions are still tentative.

In 2011, a study published in the Journal of the American Academy of Dermatology found that 100% chocolate increased the number of acne lesions in a group of 10 men between the ages of 18 and 35.3

However, this study also had limitations, including:

In 2014, another study was performed that expanded on the 2011 study. Thirteen male subjects with mild acne took either capsules filled with 100% cocoa, capsules filled with only hydrolyzed gelatin (placebo), or a combination of both. The results showed an increase in acne on day 4 and day 7. The authors concluded that there was a correlation between the consumption of chocolate and an increase in acne lesions observed during their study.4

However, there were considerable limitations to this study, including:

In 2015, a survey of 2,266 French adolescents and young adults, of which 1,375 participants had acne and 891 participants had no acne, found that the consumption of chocolate and sweets was associated with participants who reported having acne.5

However, once again, this study had limitations, including:

However, limitations to the study included:

Researchers assessed the number of acne lesions 48 hours after participants ate the candy. Then, four weeks after the first trial, the type of candy each group consumed was switched, and acne lesions were again assessed 48 hours later.

In both trials, the researchers observed an increase in acne lesions among participants consuming milk chocolate compared to those consuming jellybeans.7

However, as with all of the other studies, there were several limitations to this study, including:

Also in 2016, a study published in the Journal of the European Academy of Dermatology and Venereology found a link between high consumption of chocolate and moderate-to-severe acne. This was a case-control study, which means the researchers identified a group of people with acne and a similar group of people without acne, and then looked for differences in lifestyle between these two groups. Specifically, one of the differences they looked for was a difference in chocolate intake.

In this study, the researchers analyzed data on a total of 563 people between the ages of 10 and 24. They found that people in the “moderate-to-severe acne” group were more likely to consume chocolate more than 3 times a week compared to people in the “no acne” group.8

However, this study also had limitations:

A 2018 study published in the Journal of the European Academy of Dermatology and Venereology also found a link between chocolate consumption and self-reported acne. In this study, the researchers conducted an online survey of 10,521 people across 7 European countries. In each country, the scientists surveyed diverse individuals between the ages of 15 and 24. The survey revealed that young people who reported consuming chocolate were more likely to have acne. The researchers wrote, “Consumption of chocolate increased the probability of having acne by up to 30%.”9

However, there were limitations to this study:

A 2018 study published in the Asia Pacific Journal of Clinical Nutrition again found a link between self-reported chocolate consumption and acne. In this study, the researchers compared 57 Malaysian people with acne to 57 Malaysian people without acne who were matched for age and gender. All study participants were at least 14 years old.

At the same time, the researchers also found that people with acne tended to consume more milk than people without acne. Since milk chocolate also contains milk, the scientists suspected that it may be the dairy in chocolate that might predispose people to acne.10

However, as with all the studies on this topic, this study had several limitations:

Lastly, a 2019 study in the journal Clinical, Cosmetic and Investigational Dermatology found a connection between chocolate intake and acne in people living in Afghanistan. The researchers looked at 279 people with acne and 279 people without acne who were matched for age and gender. All participants were 10-24 years old.

The researchers evaluated each participant’s acne and then interviewed them about their dietary habits. The scientists found that people with acne tended to consume more chocolate than people without acne. In addition, they found that people who drank whole milk 3 or more times per week were more likely to suffer from moderate-to-severe acne. Therefore, the researchers concluded that the dairy in chocolate might predispose people to acne.11

This study had similar limitations to other studies on this topic:

Conclusion from the Studies

Overall, after 2011 we can see evidence mounting that chocolate might in fact lead to increased acne symptoms. However, every study had serious limitations. Therefore, while it is interesting that all nine studies after 2011 show a correlation between chocolate and acne, we still cannot state definitively that there is a link.

Since data from studies remains inconclusive, let’s look at chocolate itself and see how it might increase acne, decrease acne, or have no effect.

How chocolate might decrease acne or have no effect:

Even though all nine studies since 2011 show a weak connection between chocolate consumption and acne, all of these studies have limitations. Until more research is done, we cannot say for certain what effect reducing or eliminating chocolate intake will have on acne.

As with all good things in life, moderation may be in order. Don’t stress yourself out too much about having a little chocolate from time to time. Just try not to overdo it.