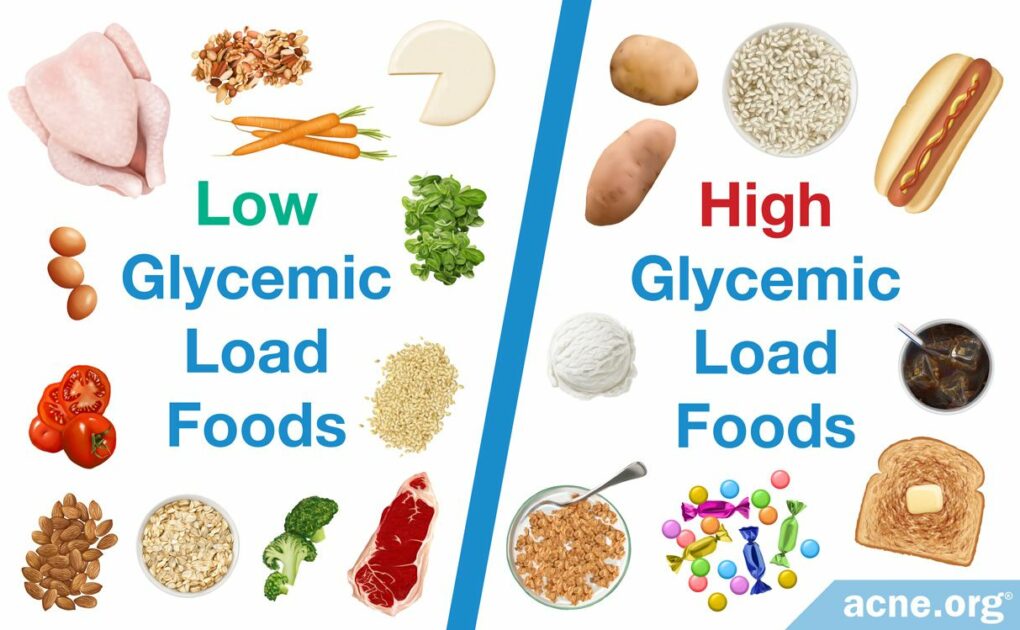 A high glycemic diet is one that is, generally speaking, high in sugar/carbs and processed foods.

This type of diet leads to spikes in blood sugar levels which causes a cascade of hormones and inflammation that some scientists suspect may lead to increased acne symptoms.

A small collection of research now exists surrounding this idea, and while some of the research is contradictory, the preponderance of the evidence is pointing toward this being a real possibility.

Because the amount of evidence supporting the link between a high glycemic load diet and acne is growing, it may be useful for acne sufferers to try to eat a lower glycemic diet when possible. This means eating a diet rich in:

It also means reducing the amount of high glycemic foods, such as:

My Experience: Throughout the years, I have tried every possible way of eating low-glycemic and carefully monitored my skin as I did it. I tried eating strictly paleo for 2 months and it helped clear my skin, but not completely. I have also tried being strictly keto for 6 months and that also helped clear me up, but not completely. I even tried being strictly carnivore for 2 months, which also helped me clear up, but again, not completely. However, the science is compelling that keeping blood sugar levels in check by eating low-carb should theoretically help reduce acne and offer a host of other health benefits, so I still eat low-glycemic most of the time. But I also make sure not to get too obsessed with it. If I go to my cousin’s house and she cooks amazing Persian dinner with rice and desert, I’ll indulge a bit and then get back on the low-glycemic wagon the next day when I’m able to choose my own food.

Fun Tip: Drinking apple cider vinegar after a high glycemic meal may help reduce a blood sugar spike. You can buy it at any supermarket, and it could be a fun superhero that can fight blood sugar spikes. Ask your doctor if drinking apple cider vinegar is safe to use with any oral medication you are taking, and if you get the green light, feel free to mix 1-2 tablespoons of it in 8 ounces of water (add stevia if desired for sweetness) and drink it right after you eat high-glycemic food for a little added insurance against blood sugar spikes.

Professionals within and outside the medical community have long believed that a person’s diet might affect acne.

Why else, some experts argue, would 9.4% of the world’s population at any given time have acne when some cultures, like the populations of Tanzania, natives of Okinawa Japan, Canadian Intuits, and South African Zulu populations have amounts hovering around 1%? Adding fuel to the fire, scientists have found that acne increases in these populations after exposure to a Western lifestyle, which includes diets consisting of processed foods, dairy, and simple sugars.1,2

As researchers have attempted to understand the relationship between dietary sugar and acne, increasing amounts of data have accumulated linking a high-sugar or high-processed carbohydrate diet to acne development. This type of diet is called a high glycemic diet.

However, due to the lack of large, long-term, controlled trials, scientists have been unable to definitively confirm the link between a high glycemic diet and acne. Therefore, doctors have not yet widely implemented diet as an acne preventative or treatment. Still, there is some evidence that shows us that a high glycemic diet may be connected with increased acne symptoms.

Let’s start by breaking down a high glycemic diet into its parts: glycemic index and glycemic load.

Glycemic index and glycemic load are two measures of a food’s ability to spike blood sugar levels. Although similar, each measures a slightly different capacity, and when it comes to acne, it is the glycemic load that is of concern.

The glycemic index (GI) is a number from 1-100 that represents how quickly a particular food will cause a rise in blood sugar levels.

The glycemic index of a food only tells part of the story. It tells us how quickly the blood sugar spikes but not by how much – this is where the glycemic load comes in.

The glycemic load (GL) is a number from 1-20, which adds onto the glycemic index by taking into account both how quickly the blood sugar rises and by how much when you eat a particular portion size of the food.

For instance, watermelon has a high glycemic index (72), but a typical serving of watermelon does not contain a lot of carbohydrates, which means the blood sugar doesn’t rise by much, and therefore, the glycemic load is low.4

Foods both high on the glycemic index and glycemic load include foods like soft drinks, candy, or bread, with large amounts of processed sugar or carbohydrates.

Foods both low on the glycemic index and glycemic load include foods like vegetables, meat, some fruits, and beans.

Foods high on the glycemic index but low on glycemic load include some fruits like watermelon and pineapple, and some vegetables like carrots and pumpkin. You might have heard that these foods are “bad for you” before because they have a high glycemic index, but they are not. They have a low glycemic load, which is what really matters.

Scientists have performed 12 studies investigating the link between glycemic load and acne.

So, the preponderance of the evidence at this point, albeit tentative, seems to point toward a connection.

This is because all those studies are small (less than 100 subjects) and have confounding factors like patient weight loss caused from the low glycemic diet. Weight loss can cause the body to become more insulin sensitive and thus improve acne in the short term.

These study flaws, among others, prevent researchers from making a general conclusion about high glycemic diets and acne. Therefore, scientists will need to perform additional studies, including at least one large, randomized trial, in order to more definitively claim that high glycemic load diets cause acne.

However, for now, the evidence may point toward a connection. Let’s look now at the science behind exactly why a high glycemic load diet might increase acne.

Eating a high glycemic load food increases the level of sugar in the blood. When the body senses there is a high level of blood sugar it responds by producing insulin, which helps the body use and store the sugar. The presence of insulin then triggers the activation of a variety of responses in the body, which might potentially lead to an increase in acne.

Eating a high glycemic load diet leads to an increase of insulin, which suppresses FoxO1 and activates mTORC1 pathways. These pathways may result in an increase in sebum production, making the skin oilier, which could in turn promote the growth of acne bacteria. Therefore, some scientists predict that consuming a low glycemic diet will result in decreased levels of insulin and in turn a decreased amount of sebum, bacteria growth, and acne.15