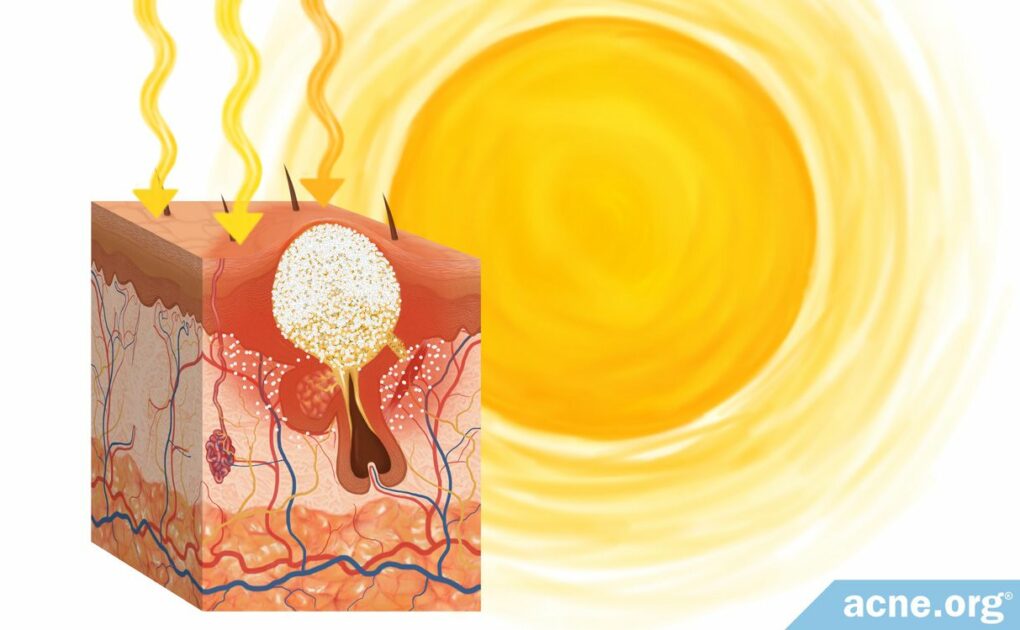 A Bit Helps But Too Much Hurts

Moderate sun exposure may be helpful for achieving adequate vitamin D levels in the body, which may potentially help with acne to some degree. The sun’s UV rays may also help kill acne bacteria and lessen inflammation, both of which could also help with acne.

However, too much sun exposure causes sunburn, which is highly irritating to the skin. Anything that irritates the skin can lead to acne as the skin repairs itself. If you find that you are breaking out “for no apparent reason” consider if you got a sunburn in the week or two prior to the breakout.

The Research: Research looking at how sunlight directly affects acne is limited and contradictory, so we cannot definitively say whether getting some sun directly on acne-prone skin will help. But suffice it to say that getting too much sun is a bad idea.

The Bottom Line: For people with the lightest skin, getting up to 20 minutes of unprotected sun exposure will help you keep your vitamin D levels up, and might–we really don’t know, but it might–help alleviate acne to some degree. For people with the darkest skin, aim for 2 hours. The key is to not stay in the sun so long that you get burnt. Err on the side of caution.

The Sun’s Effect on Acne Is Still an Open Question

There is limited and conflicting scientific evidence to support the use of sunlight in treating acne. In fact, partly due to the fact that it is difficult to perform studies on sun exposure, there are no reliable studies that look directly at the effect of sunlight on acne.

For this reason, to get an approximate answer to the question of whether the sun helps or hurts acne we need to look at two other types of studies that can potentially shine light (no pun intended) on this question:

As we can see, based on the evidence we have so far, we can’t say whether the sun’s rays will benefit acne. However, let’s look more closely at these two types of studies one by one, starting with studies using artificial light, and see what we can suss out.

Studying the effects of sunlight can be fraught with error because depending on cloud cover, latitude, season, and time of day, sun exposure can vary greatly.

Several teams of scientists have taken a critical look at all the studies on artificial light and acne so far. Unfortunately, they came to the conclusion that the evidence is conflicting and weak. In other words, the jury is very much still out when it comes to the effects of artificial light on acne.1-3

The sun is highest in the sky in the summer, so we can look to studies on seasonal variations to see if we can find some other evidence on sun exposure and acne.

But you guessed it, the studies that have been performed so far reach conflicting conclusions. The majority of studies show improvement of acne during summer months, but some others pointing toward a worsening of acne in the summer.4-8 Also, many of these studies use self-reported data, which is unreliable. Therefore, due to the conflicting results and less than ideal study methodology, we cannot draw conclusions from them.

Since we will need more research before we can say for sure how the sun affects acne, the next thing we can take a look at is vitamin D and how it might affect acne.

Vitamin D is an extremely important vitamin for the health of the skin. People with acne tend to have lower levels of vitamin D in the blood, and there is some evidence that vitamin D can help in the treatment of acne. Since exposure to sunlight is the only way that the body produces vitamin D, it is reasonable to question whether sun exposure might help improve acne for this reason.

Preliminary studies done so far show us that severe acne might go along with vitamin D deficiency and that administering vitamin D might potentially help improve acne.9-12 In other words, getting some sun exposure might indirectly be beneficial for acne if it increases our vitamin D levels. But we should interpret the conclusions from these preliminary studies with caution because they are just that–preliminary.

How to Get the Right Amount of Vitamin D

Regardless of whether getting sun exposure will allow you to improve your acne, it is important to get the vitamin D you need for your overall health. Vitamin D deficiency is pervasive in modern society due to restricted time in the sun and the use of sunscreens. Therefore, if blood vitamin D levels are low, doctors recommended spending time in the sun. However, the amount of sun required varies according to several factors, including:

Light & Laser Treatment for Acne – Does This Give Us Any Clues?

Light and laser-based treatments for acne use various forms of light to reduce acne symptoms. These treatments, which rely on the antibacterial and anti-inflammatory properties of several wavelengths of light, usually are somewhat effective.

Whether the sun would offer similar benefits is unknown, but because light and laser therapy do help reduce acne to some degree, it is possible that the sun’s rays could do the same.

Potential Side of Effects of Sun Exposure

A moderate amount of sun exposure may or may not help reduce acne. A sunburn, on the other hand, is skin damage and will very likely result in a breakout a week or two following the sunburn. To decrease the chance of developing acne, avoid sunburn.

Long-term overexposure to sunlight also results in serious side effects such as increased risk of skin cancers. In addition, commonly used acne medications, such as tetracycline antibiotics and isotretinoin (Accutane), can cause the skin to become more sensitive to the sun: this increases the risk of sunburn and, subsequently, cancer development.1

Thus far, research has been unable to positively prove or disprove that sun exposure is effective as an acne treatment.

However, there is evidence of a correlation between low levels of vitamin D and acne, suggesting that sun exposure could help acne for this reason.

Light and laser therapy have also been shown to be at least somewhat effective in reducing acne lesions, so this gives us hope that the sun might provide some benefit.

However, if you choose to get regular sun exposure, be cautious. Too much sun will cause sunburn, which will bite back with acne in the weeks following the sunburn. And too much sun can also cause skin cancer over the long haul.