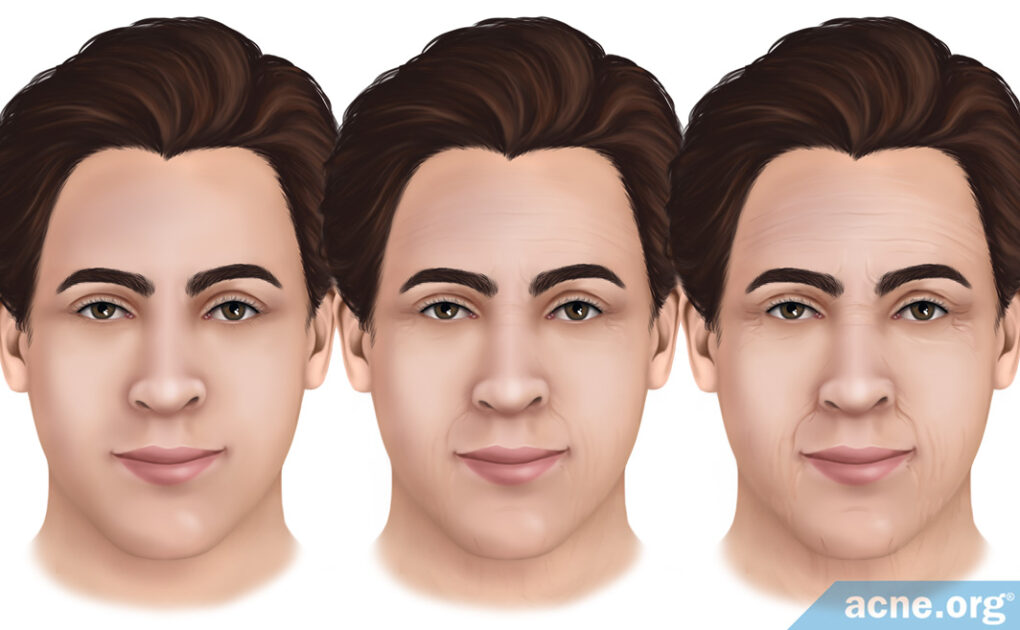 Because of a Lack of Long Follow-Up Studies, This Remains Unknown

How isotretinoin might lead to skin aging in the long term: Isotretinoin may cause a prolonged reduction of skin oil and lingering skin dryness. Whether this will cause the skin to prematurely show signs of aging like thin skin and/or wrinkles will require longer-term follow-up studies.

The Bottom Line: Isotretinoin is by all accounts a hardcore medication that powerfully and permanently alters the skin, and can lead to some users suffering with lifelong side effects of the skin and the rest of the body. This is why it is approved only for severe, scarring acne that does not respond to other treatments. Whether it causes more long-term aging is one more consideration that needs to be weighed carefully before taking it.

Isotretinoin, often referred to by its original brand name, Accutane®, is an oral medication that is approved to treat severe cystic acne. It permanently reduces skin oil levels and can result in dryer skin in the long term.

It is unclear whether these effects can cause the skin to age more quickly, but is a concern of many people who are considering the drug or who have taken it in the past.1-4

First, let’s look at the characteristics of aged skin:

If you speak with anyone who has taken isotretinoin, they will tell you that their skin was extremely dry while on the drug. In fact, dry, flaky, and even cracked and bleeding skin and lips is how doctors know isotretinoin is working.

People who took isotretinoin in the past will also often tell you that along with enjoying permanently clearer skin, their skin remained permanently dryer as well. A common complaint amongst people who have taken the drug is the necessity to use lip balm several times a day for the rest of their life.

To put it succinctly, isotretinoin’s ability to dramatically reduce skin oil levels and permanently “dry out” the skin is what makes it so effective against acne, but also what causes concern when it comes to the potential for long-term skin aging.

Any discussion about isotretinoin’s side effects must also include its other potentially severe side effects, as noted in the drawer below.

Scientists have never looked at the long-term effect of isotretinoin on signs of skin aging. However, two studies have been performed in an attempt to identify how long the effects of isotretinoin last after stopping treatment, and we can get some clues from these studies.1,3,9,11,12

Study 1: The first study followed people for one year and found that isotretinoin continues to reduce the level of sebum the skin produces for one year following treatment, and continues to produce skin dryness. No studies examined if this effect lasts longer than a year, but many people who have taken isotretinoin can attest to permanent changes in their skin.

Study 2: The second study followed patients for 4 – 9 years following isotretinoin treatment. The researchers found that 4 – 8% of patients reported long-term side effects. However, as we have noted, this study did not look at signs of skin aging.

So what’s the verdict? Unfortunately, we simply can’t say based on the data we have. However, many anecdotal accounts of faster skin aging after isotretinoin abound on the Internet. While we have to stay extremely vigilant not to draw conclusions from anecdotal online reports, it does make common sense that isotretinoin might lead to faster skin aging based on its ability to permanently and irreversibly reduce the natural skin oil levels of the skin.

To make matters even more confusing, five studies performed on middle-aged people and senior citizens have found that taking a low dose of isotretinoin for 3-6 months may actually reduce the signs of skin aging.

It is important to note that:

In other words, it is impossible to say whether isotretinoin would have a similar anti-aging effect in younger people, and it we also don’t know whether the anti-aging effect noticed in these studies is lasting. But this research is interesting and points toward the possibility that isotretinoin might not cause problems with skin aging, and may in fact help with skin aging at least in the short term.

Because long follow-up studies are severely limited, no one knows how isotretinoin affects long-term skin aging. This is one more variable to keep in mind if you are considering isotretinoin as a treatment.