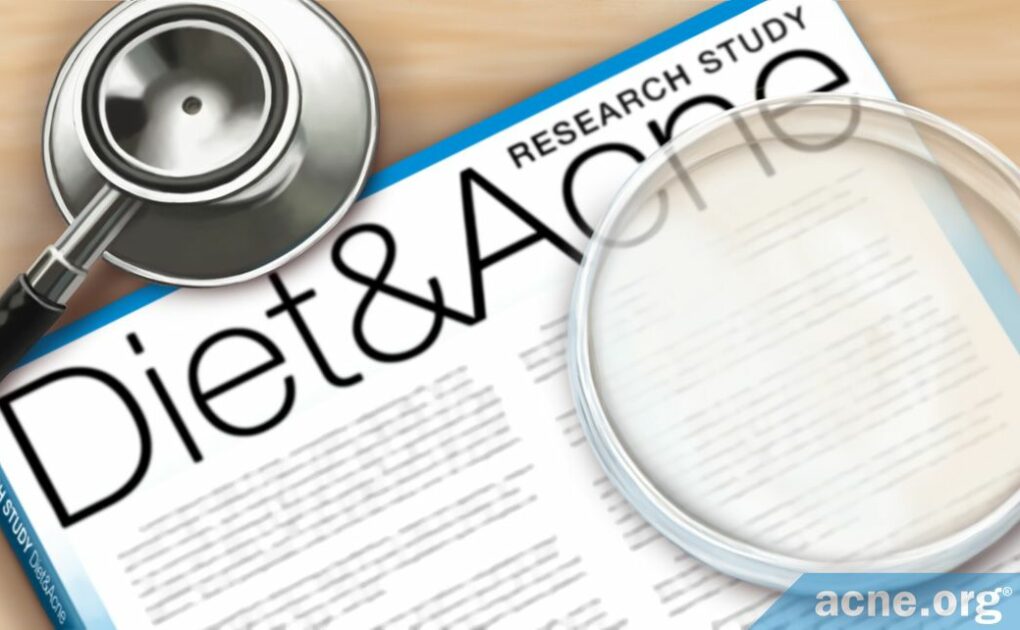 Studying the impact of diet on any disease, including acne, is difficult because to determine a cause-effect relationship a study would need to control the diet of the people studied over a long period of time, and this can be impractical and expensive.

Because of this, researchers have never performed this type of study on acne. Therefore, we are left relying mostly on surveys, which provide inconclusive evidence.

Until we have several long-term, randomized studies that control diet over a substantial period of time, determining any relationship between diet and acne will remain elusive.

Investigating the relationship between diet and acne is difficult. To date, researchers have not performed randomized controlled trials to confirm that diet improves or worsens acne.

As an acne sufferer, you can experiment with a particular diet to see if your acne improves. From the research thus far, there is evidence that consuming a low-glycemic diet, including colorful fruits and vegetables and omega-3 fats, may help with acne symptoms. However, until we see repeated randomized controlled trials (RCTs) on various diets over long periods of time, we cannot know for sure how diet affects acne.

Be Careful Not to Confuse Diet-and-Acne Hypotheses with Facts

The relationship between acne and diet, in particular, is difficult to study because researchers need to consider the different types of food people eat while at the same time examining all the other variables in their lives that might also affect acne, for instance, how much sun exposure they get and their level of stress. Furthermore, acne is caused by multiple factors, including genetics, inflammation, hormones, skin cell overproduction, skin oil overproduction, and acne bacteria. Because of this complexity, combined with the fact that we have not yet seen long-term randomized controlled trials looking into diet and acne, any hypotheses regarding diet and acne are just that, hypotheses.

A quick internet search will lead you to hundreds of seemingly credible sources claiming that a particular diet works for acne, and that the “results are in,” and “diet causes acne.” Beware of such claims. While researchers have made progress, and evidence is mounting that eating a low-glycemic diet rich in colorful fruits and vegetables and omega-3 fats may in fact help with acne, we simply do not have the hard science we need to definitively conclude anything about diet and acne.

From here on out in this article, we will begin diving into the types of studies available to researchers. It will be a deep dive, and we’re about to get very scientific. So if you’re feeling interested and focused, read on! Once you understand how studies are performed, you may better understand the challenges of studying diet and acne.

What Are the Different Types of Studies?

Researchers perform studies in order to find the cause of a disease or the best treatment for a particular disease.1-4

Sometimes these studies center on how diet affects a disease, like acne.

Some types of studies are more suitable than others for answering a particular question. Before a researcher chooses a study-design, he needs to consider:

Answering these questions helps the researcher determine what study-design to employ.

Some studies are lower on what is called the “research heirarchy” and produce data that is less dependable, while others are higher on the hierarchy, producing data that is more reliable.

All studies can be broken down into two main categories:

Observational studies are further broken down into two types:

Descriptive studies describe certain situations, such as symptoms of acne. In this type of study, researchers look at only one group. Descriptive studies particularly on acne simply describe its symptoms, without trying to explain the cause. Descriptive studies are lowest in the research hierarchy because their purpose is only to introduce new symptoms, and sometimes new diseases, that had not been studied previously. Scientists then make hypotheses, which compel other scientists to further study the new symptoms or disease. An example of a descriptive study is a case report, which introduces a disease or symptoms of a disease that had not been seen or studied before. For instance, a case report on acne would be a description of its symptoms as seen in only one or a few people.1

Analytical studies compare symptoms of a condition between two different groups of participants, without introducing an exposure. For example, a researcher may compare symptoms of acne between a group of acne sufferers and a group of non-sufferers. The latter group would be the control group, also known as the comparison group.

A cross-sectional study, also known as a frequency study or a prevalence study, is a kind of analytical study that observes two separate conditions at the same time. For example, a researcher may measure a participant’s sugar intake while noting whether she has acne or not.

Cross-sectional studies on acne involve two groups of participants: one group of people who have acne and another group of people who do not. If there is only one group, a researcher cannot determine a correlation between, for example, sugar and acne. However, the researcher may find a correlation if there are two groups, which allows him to see, for instance, that the group who consume more sugar experiences more acne compared with the second group who consume less sugar and do not experience acne.

A case-control study is a kind of analytical study in which the researcher begins with the outcome: for instance, in the case of acne, the researcher starts with a group of patients who already have acne and then compares it to a similar group of people (same age, gender, etc.) who do not have acne.

The researcher then questions the patients or looks at their medical charts to check whether they had been subjected to any prior exposures (e.g., a medication). If the exposure is higher in either of the groups, the researcher can conclude that the exposure is associated with an increased or decreased risk of acne.

A case-control study is useful when the outcome or disease is rare because researchers can intentionally search for participants of a specific outcome or those who have a certain disease. It also requires less time, effort, and money, compared to other types of studies.

However, a case-control study can be challenging because the researcher has to find the appropriate participants for the control group. The participants in this group must be similar to those in the other group, the only difference being that they do not have the disease.

Another challenge in performing case-control studies is that participants may not remember their past exposures when asked, so they may not be able to provide accurate answers. This leads to false information, also known as recall bias.

A cohort study is a type of analytical study that follows one or more groups of people from the time they receive an exposure to the end of the study. For example, a researcher may follow a group of teenage girls who have had severe acne for 20 years in order to see if a low-calorie diet causes a significant reduction in acne.

There is less concern about recall bias in cohort studies than in case-control studies. Participants do not need to “recall” or remember past exposures since the researcher follows his journey closely from the time of exposure.

However, cohort studies come with disadvantages:

Now let’s take a look at the two types of experimental studies, which unlike observational studies, includes the introduction of an exposure:

There are two groups in a randomized study. Researchers let chance decide which participants go into which group. The participants in one group receive a placebo (a “treatment” that does not have an effect) and those in the other group receive the study drug (e.g., an acne medication). A randomized controlled trial (RCT) is the gold standard in the research hierarchy.

Randomized studies are useful for observing small to moderate effects of an exposure. For example, if a researcher studies a new drug, one group receives it, while the other group receives a placebo. The researcher then can study any outcomes or slight effects of the exposure in the two groups.

A problem that researchers encounter in most studies is bias, which is favoring someone or something over someone else or something else. In a study, bias can lead to a false conclusion. Randomized studies help to reduce or avoid this. Examples of bias include the following:

The following are examples of possible confounding factors when studying diet and acne:

In a non-randomized study, the researcher is not blinded. Rather, she is tasked with choosing who will be in the study and ultimately assigning participants to particular groups.

There also is the possibility of information bias since the researcher knows which participants are in which groups. Therefore, non-randomized studies can produce inferior results when compared to randomized studies.

However, sometimes non-randomized studies have to be performed when randomization is not possible. For instance, a randomized study would not be ethical if the exposure harmed certain people. In a diet-and-acne study, it would be unethical to perform a randomized study if the diet contained peanuts or other food items that are known to cause allergies in some individuals.

So far, most studies done on diet and acne are cross-sectional studies and case-control studies. These studies have not shown that diet causes acne, but that diet may make acne worse or affect it to some degree.

The best study to provide evidence for the cause of acne would be a randomized study because it generally is free of bias. However, to date, no researcher has performed a randomized study investigating the relationship between diet and acne because of:

Study-designs come with both strengths and limitations. The best study to investigate the relationship between diet and acne would be a randomized controlled trial.3 However, due to many confounding factors, length of time, and the expensive nature of randomized studies, researchers have not performed any on diet and acne. For this reason, we are left without complete knowledge regarding the effects of diet on acne.