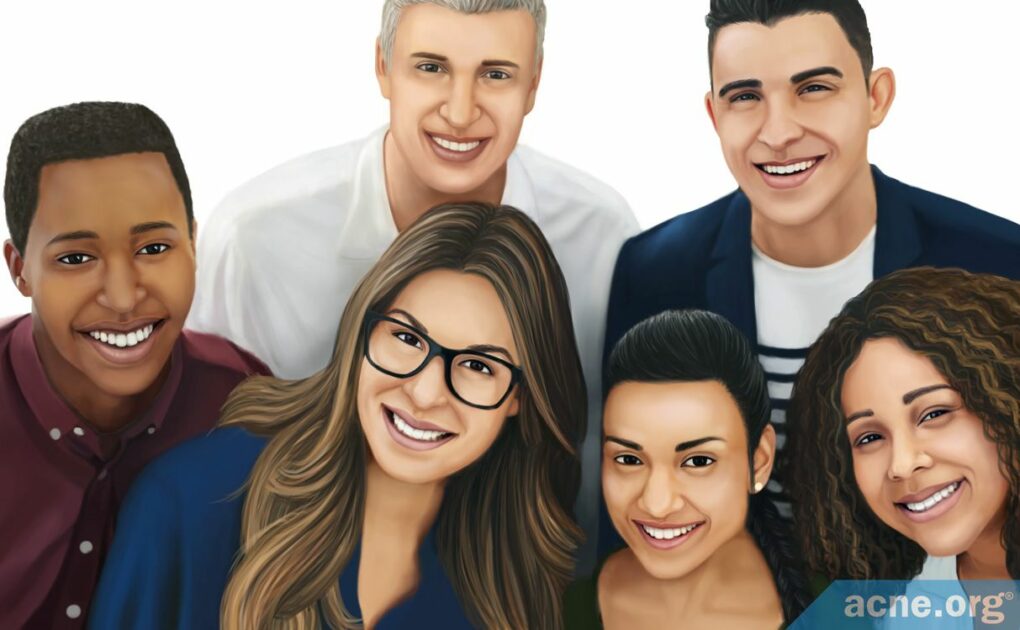 Men: Limited research suggests that men of all ethnicities may have similar amounts of adult acne.

Adult acne is defined as acne in people over 25 years of age.

In the U.S., adult acne is the leading skin condition affecting people between the ages of 25 and 40,1 but it does not affect all races and ethnicities equally.2

Several studies have tried to determine what ethnic group suffers the most from adult acne. Overall, the data we have thus far, while preliminary, seems to point toward:

Now let’s have a closer look at the studies one by one.

A large study published in 2010 in the U.S. in the Journal of the European Academy of Dermatology and Venereology classified people’s ethnicities into five groups:

The authors of the study examined 2895 women between the ages of 10 and 70 living in four major cities: Los Angeles, London, Rome, and Akita. Unfortunately, we do not know exactly how many of the women were adults, but we do know it was the majority because the authors mentioned that 62% were 31 years of age or older.

When it came to mild acne, the researchers found that:

While the numbers are different between ethnic groups, for several of the groups, the differences are so small that the authors could not regard them as significant. For example, the numbers of black and white women with mild acne are similar and fall in the middle–between Hispanic and Asian women. The only case in which the numbers were significantly different from each other was when Hispanic women were compared to Asian and Continental Indian women: Hispanic women had much more acne than either of these groups. Consequently, the only conclusion the researchers were comfortable drawing was that Hispanic women had the most acne, significantly more than either Asian, white, or Continental Indian women, and that Asian and Continental Indian women had the least. When it came to black or white women, they could not say. The same researchers then compared the number of women of each ethnicity suffering from moderate to severe acne and found that:

The strength of this study was that the researchers used digital photography to make a detailed and objective evaluation of each woman’s skin type and acne severity.

Study 2: Women from Sub-Saharan Africa Might Have the Most Adult Acne [Results Are Preliminary]

The second study, published in 2007 in the journal BMC Dermatology, used an even more detailed approach to describing ethnicities. For example, the researchers separated white adults into three different groups depending on which part of Europe they came from.

The authors surveyed 18,747 adults living in Oslo, Norway and subdivided them into eight groups based on their region of origin:

The researchers found that:

“Women from [Sub-Saharan] Africa, but also East Asia and Middle East/North Africa report significantly more pimples than Norwegian women; on the other hand there are no significant ethnic differences among men.”3

As in the previous study, the differences in numbers between many of the groups were too small for the authors to draw any reliable conclusions. For example, the number of men with acne in each region was slightly different, but the difference was too small to be significant. It should be noted that although this study was the largest of the three, its findings may be the least reliable because the acne sufferers were not directly seen by the researchers, but simply filled out questionnaires which they received in the mail.3

Study 3: Do Black Adults Have More Acne than White Adults? [Results Are Inconclusive]

A third study looked at patients who came to a dermatology clinic in South East London over the course of a year to see whether black adults suffered from acne more than white adults.4 However, the results of the study were inconclusive.

Conclusions from the Three Studies

When we analyze the data, from what we can currently tell, it appears that men of all ethnicities may experience adult acne to a similar degree. However, for women:

Combining the findings of these three studies, we can attempt to rank ethnicities, from women with the most adult acne to those with the least, as follows:

It should be noted that this ranking is approximate, since some of the studies presented conflicting results, and results could change as more study data flows in. In addition, as discussed above, each study encountered different limitations. What’s more, the differences seen in the amount of acne across ethnicities might be due to differences in lifestyle, skincare practices, and access to medical care in different countries.5 Simply put, more rigorous research is necessary to establish a conclusive ranking of ethnicities in relation to acne prevalence.5,6

What Causes Some Ethnicities to Have More Adult Acne than Others?

Acne is generally speaking a colorblind disease. It affects all ethnicities and is the same disease regardless of your background. According to an overview article published in 2010 in the Journal of Clinical and Aesthetic Dermatology, “The way acne forms is the same in all ethnic and racial groups.”7

However, as noted in another overview article in the American Journal of Clinical Dermatology in 2014, “There are some differences in how the skin looks at the microscopic level and in the way the skin produces oil across different ethnic groups, which may make some races more likely to develop acne than others.”8

But why would this be?

Scientists have put forward a hypothesis to explain why some ethnicities have more adult acne than others. This idea is based on limited evidence and requires further testing, so it is called a “hypothesis” at this point instead of a “theory.” This hypothesis is that people of some ethnicities produce more sebum (skin oil),7,8 which increases their chances of developing acne. But evidence is contradictory which makes it hard to decipher what the truth really is.8

Two dermatologists, Dr. Natalie Yin and Dr. Amy McMichael, who wrote an overview article in the American Journal of Clinical Dermatology, gave evidence both for and against this hypothesis.

For reference, they used the term “people of color” to refer to:

Evidence for this hypothesis

Two studies found that people of color have larger pores, and scientists believe that pore size is directly linked with how much sebum a person’s skin produces. In agreement with this is a study which showed that women of color, who have larger pores, are more likely to suffer from moderate-to-severe acne. In addition, three studies have shown that black people in particular produce more sebum than other racial groups. As mentioned, there is believed to be a positive correlation between pore size and sebum production, with larger pores producing more sebum. This would mean that the more sebum the skin produced, the likelier it would be to develop acne, with acne severity increasing with increased sebum output. This increases the likelihood that a person will develop acne due to bacterial colonization in the sebum.

Evidence against this hypothesis

On the other hand, the same study found that in white women, there is no connection between how much sebum is produced and whether acne develops.

And confounding the data even further, one study did not find any differences in sebum levels among ethnic groups.8

In short, whether there is a lot of meat on the bones when it comes to differences in prevalence of adult acne between ethnicities remains to be seen, but it is fascinating watching the research results pile up. Perhaps after a few more large studies, the picture will come more into focus.