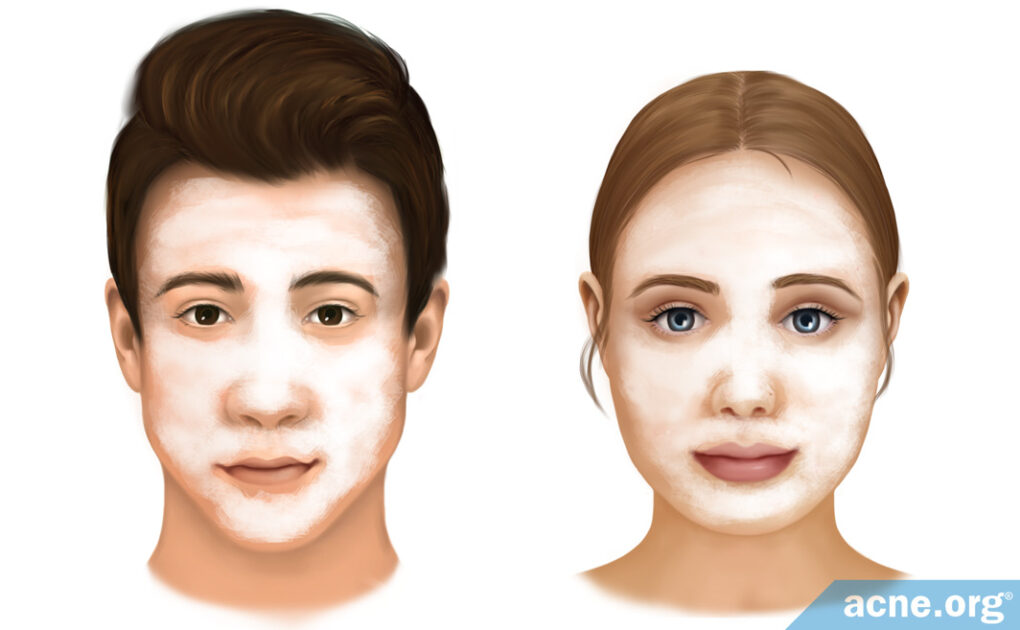 Due to higher levels of male hormones (androgens), the skin of males and females is different.

Female skin is the opposite:

Male Hormones Play a Major Role in the Development of Acne

When it comes to acne, the role of androgen hormones (male hormones present in both males and females) should not be underestimated. These hormones are a necessary condition for acne to develop, and the fact that males end up producing more male hormones like testosterone explains why they are more likely to develop acne as well as to have more severe acne compared to females.

Hormonal Treatments – Usually For Females Only

When acne is caused by abnormally high androgen production, estrogens and anti-androgens can help counteract the effects of these androgens. Doctors prescribe these two options far more often for female patients, since they can cause feminization in males, such as the growth of breast tissue.

Estrogens are female sex hormones. They work by reducing both the size of the glands that produce sebum and the amount of sebum that these glands produce.4 Estrogens are prescribed to only females in the form of oral contraceptives (birth control pills), and are effective in reducing androgen levels. For mild-to-moderate acne, contraceptives that contain mostly estrogen usually reduce acne, on average, by 60%. For more severe acne, or if there is no improvement with contraceptives containing mostly estrogen, switching to contraceptives that contain a type of hormone called progestogen may improve response. For acne that doesn’t improve with contraceptives alone, adding an anti-androgen medication is usually effective.6

Anti-androgens, such as spironolactone, are medications that block the effects of androgens, thus reducing the production of sebum. They are usually prescribed only to females, but their power to reduce acne has been shown in both females and males in clinical trials.3,7

According to one study, males and females with therapeutically resistant, severe, persistent acne, known as “cystic acne,” typically have abnormally high androgen levels and benefit from estrogen and/or anti-androgen treatment.8

Some Acne Treatments May Work Better in Females

For instance, two studies that treated acne with a combination clindamycin phosphate/benzoyl peroxide gel found that this medication may be more effective in females.9,10

Another study looked at a topical anti-inflammatory acne medication called dapsone and found that it too worked better in females.11

A final study looked at the oral medication isotretinoin and showed no difference in efficacy between males and females.12

While some older studies found that males were less likely to stick to their treatment plan compared to females, recent research suggests this may not be the case.13,14 For example, a study published in the Journal of International Medical Research in 2019 looked at a total of 250 patients and found that both males and females were equally likely to carefully follow their acne treatment plan.14 In other words, if certain acne medications work better for females, it may not be because females are simply better at following their doctor’s orders.

The make-up of male and female skin differs, and each type responds differently to treatment. Hormonal treatments are far more commonly used for females than for males, and some non-hormonal treatments seem to work slightly better on females when compared to male skin. The exception being isotretinoin, which may treat both skin types equally.