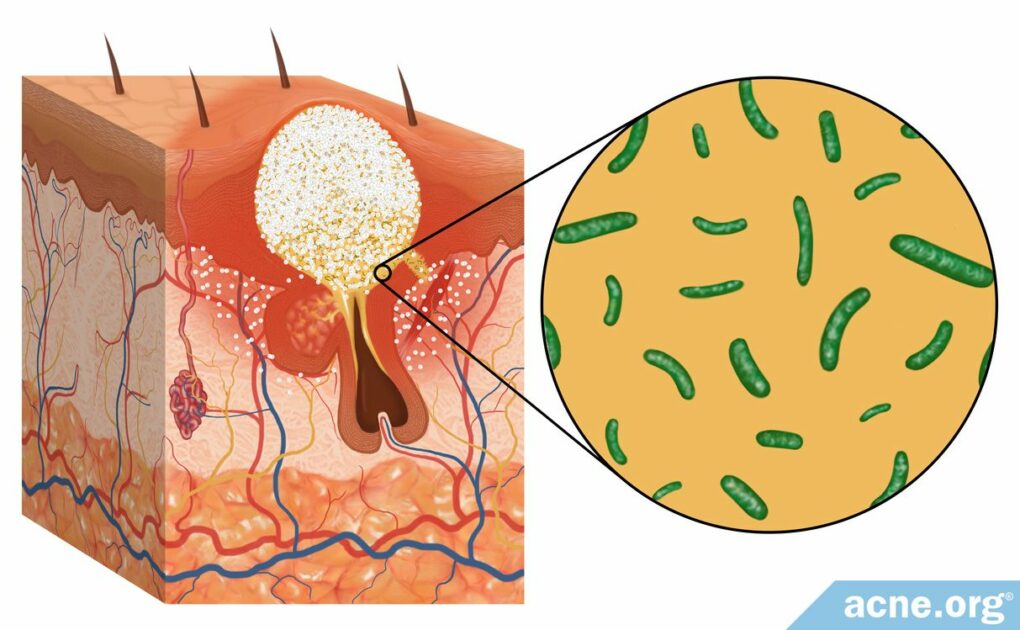 Acne Bacteria May Turn a Clogged Pore into an Inflamed Pimple

Acne forms when a skin pore becomes clogged and skin oil that normally drains to the surface gets trapped inside.

Living inside this skin oil is acne bacteria, called Cutibacterium acnes (C. acnes). When skin oil gets trapped, C. acnes multiplies. Research shows us that this bacteria then increases inflammation in the pore, leading to the redness and soreness that we see in acne lesions.

This is why medications like benzoyl peroxide that kill acne bacteria work well to combat acne.

However, acne is not first-and-foremost a bacterial disease. As science marches on, researchers are realizing that acne is at its core an inflammatory disease, and bacteria is simply one component in its development.

This article is a deep scientific dive into how bacteria may be involved in acne. If you’re a nerd like me, you may enjoy it 🙂

Acne is a complex disease with many contributing factors, and the scientific community still does not understand its underlying causes. Researchers believe that a sequence of steps, including inflammation, excess production of skin oil (sebum), overgrowth of skin cells, and bacterial colonization all play a role in acne development. However, the order in which these steps occur, and the relationship between them, still is unclear and is a subject of scientific debate.

In this article we will start by looking at the steps in acne development and then look more closely at the role of bacteria specifically.

For years, scientists have used a classic model that explains the steps that lead to acne in the following order:

However, recent evidence indicates that this classic model that scientists have used for years may be incorrect and that inflammation may actually be the first step in acne development, and this inflammation leads to the initial clogged pore.1-3 Colonization of bacteria still comes later in the process, but instead of causing inflammation, it simply worsens already existing inflammation. In other words, acne is now viewed as a primarily inflammatory disease that becomes worse due to the presence of bacteria.4,5

The Role of Bacteria in Acne

A variety of different microorganisms, including the “acne bacteria” called Cutibacterium acnes (C. acnes) live on the skin of almost all adults.4 C. acnes is an anaerobic bacteria, which means it cannot live in the presence of oxygen. It lives mostly in the oily parts of the body where acne develops, such as the pores of the face and of the upper trunk (chest/back). According to a 2009 article in the journal, Science:

“[T]he [skin oil] glands of the face, scalp, chest and back produce large amounts of […] sebum and are the sites where […] Cutibacterium acnes predominates.”6

The fact that C. acnes lives on normal skin and yet not all people develop acne indicates that its mere presence is not sufficient to cause acne. At the same time, C. acnes does indeed appear to contribute to acne, and scientists are still trying to determine exactly what role it plays and under what circumstances it transforms from a normal skin-microbe into one that contributes to disease.

To make matters even more complicated, it turns out that there are six different subtypes of the acne bacteria C. acnes:7

Even though bacteria is not always found in acne lesions, it usually is, and the presence of bacteria can make inflammation worse. In essence, bacteria likely make the redness and soreness of acne all the more red and sore. Let’s look a bit more deeply into how this occurs.

How C. acnes Contributes to Inflammation of Acne

Expand the section below if you are curious to delve a bit deeper into how C. acnes can sometimes make inflammation worse.

As we can see from these studies, C. acnes appears to stimulate several different inflammatory mechanisms, including activating the immune system and creating inflammation directly in the skin, all of which ultimately contribute to the inflammatory redness and soreness of acne.

While antibiotics are one option for reducing the number of potentially harmful bacteria like C. acnes, the medical community is starting to recognize that prescribing antibiotics long-term is a bad idea. This is because long-term antibiotics use contributes to the development of antibiotic-resistant bacteria. Today, guidelines for doctors recommend prescribing other treatments for acne and either avoiding antibiotics altogether, or only prescribing them for short periods of up to 3 months.7

Luckily, as scientists gain a greater understanding of the role of bacteria, particularly C. acnes, in the processes underlying acne, new treatment options become possible, including medications that target particular parts of the immune system that are susceptible to activation by bacteria, and new vaccines that target C. acnes, to name just a few.9,12,13