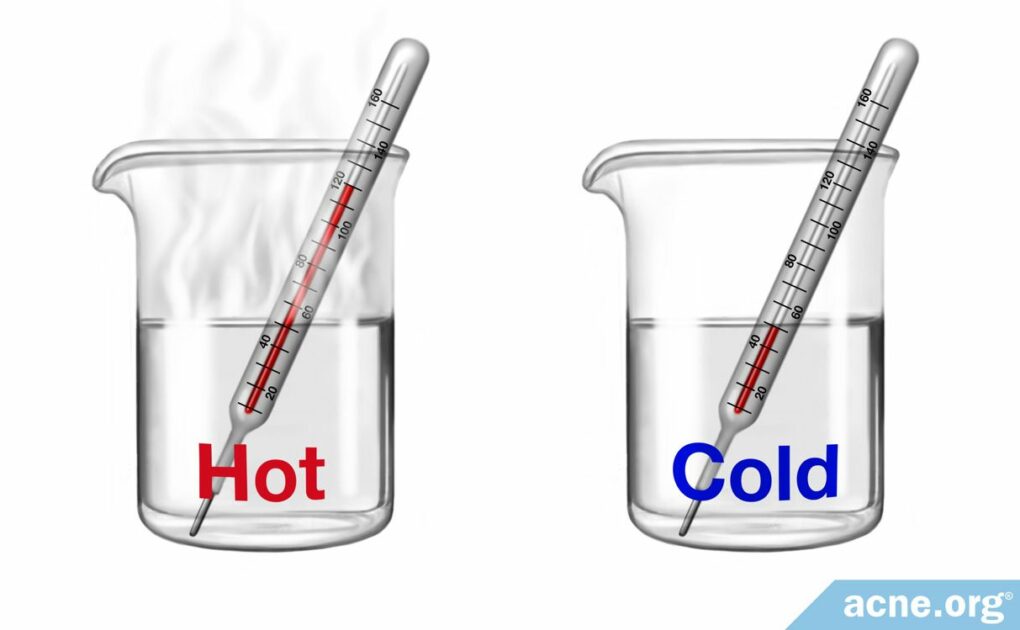 Warm Water May Be Ideal: Some evidence shows that warm water may improve skin healing.

Cool or Cold Water Is Fine: There is no evidence that washing with cool or cold water would be detrimental in any way.

Avoid Hot Water: Washing the skin in very hot water (over 42° celsius / 107.6° farenheit) has been shown in some studies to cause skin dryness, skin oil excretion, and skin aging.

The Bottom Line: Acne-prone skin is clearest when it is in balance, which means it is not overly dry or irritated. To be on the safe side, use warm water when you can. If you prefer it, cool or cold water should be perfectly fine as well.

Wash the Right Way: Whether you are using warm, cool, or cold water, it is vital that you avoid irritating your skin when you wash by:

Washing with warm, cool, or cold water is safe. But it is probably best to avoid very hot water because a few isolated studies suggest exposing the skin to heat above 42°C (107.6° F) has effects such as:

However, keep in mind, these effects are due to hot water, not warm water. One study showed that warmer temperatures (but not hot) might actually improve skin healing. In other words, while it is probably best to avoid hot water, warm water is likely to be ideal.

When it comes to cold water, we have no studies that look at how washing with cold water affects acne. However, we do know that ice is dramatically anti-inflammatory and may help heal acne. Would cold water do the same? Probably not to the same degree, but it probably also wouldn’t hurt.

Some isolated studies find that the skin may absorb topical treatments more readily when it is warmed up. However the majority of studies point toward drawbacks of exposing the skin to hot temperatures, including skin dryness, skin oil buildup, skin damage, and wrinkling. Taken together, these studies seem to suggest that washing the skin with hot water might have more harmful than beneficial consequences. Open the drawer below if you’d like to read through the various studies.

Most of our knowledge about how cold affects the body comes from cryotherapy, the well-known practice of applying cold to an injury site like a sprained ankle. However, cryotherapy is effective only once the skin temperature is reduced all the way down to 10°C to 15°C (50°F to 59°F),11 which can take application of cold temperatures for 10 – 20 minutes on major joints of the body. When it comes to the skin, application of cold temperatures reduces the skin temperature more quickly, in as little as 5 minutes. Still, that is far more time than anyone takes washing their skin. Furthermore, cold water from the faucet is much warmer than the cold that is used in cryotherapy, like ice for example.

Still, when it comes to acne, applying anything cold to the skin probably can’t hurt. For instance, one study found that even a single session of cryotherapy might help reduce skin oil (sebum) production, which could help acne sufferers since most people who have acne have an increased level of skin oil production.13

However, again, washing with cool or cold water for only a few seconds is highly unlikely to have the same effect.

So, when it comes to cool temperatures, we know that icing an acne lesion can help heal it more quickly, but whether washing with cool water for only a few seconds would approximate anything close to the application of ice or not is unlikely.

Washing in hot water may cause damage to the skin over time and could disrupt the important skin barrier. Warm water, on the other hand, is fine. If you like washing with warm water, feel free to continue. If you prefer cool or cold water, that’s fine too.