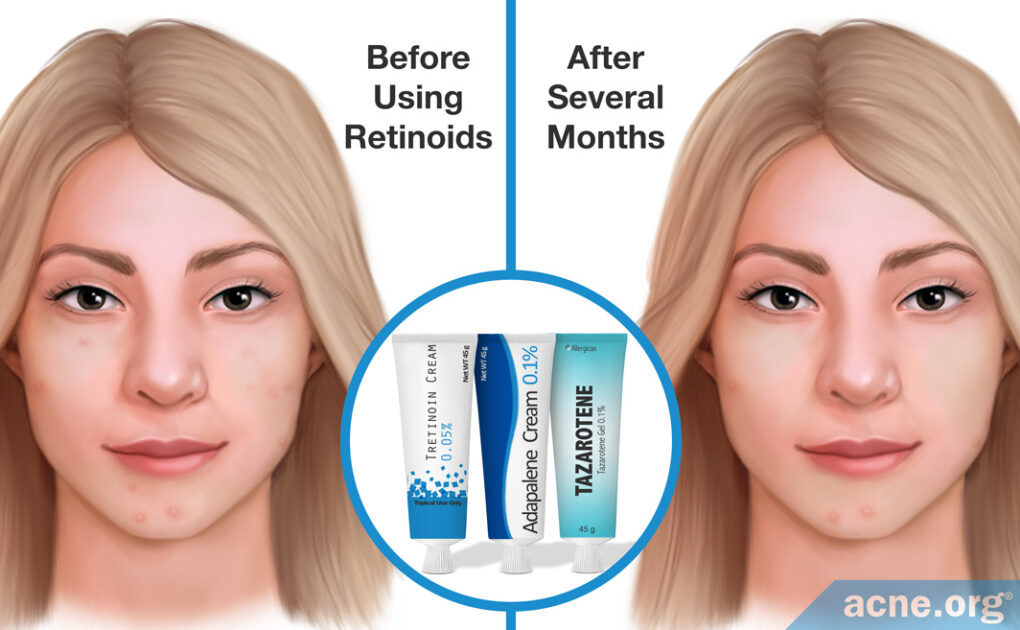 Yes, Topical Retinoids (Tretinoin, Adapalene, Tazarotene) Reduce the Appearance of Skin Aging by Promoting Renewal of the Skin, Helping to Reverse Sun Damage, and Promoting the Production of the Important Skin Protein, Collagen

There are three topical retinoids that doctors commonly prescribe for their ability to unclog pores and reduce inflammation, thus reducing acne symptoms:

All of these medications reduce acne to a moderate degree. However, as a bonus, they also fight the signs of aging by:

This all sounds great, but there are two things to be aware of:

Still, if you are looking for an acne treatment and an anti-aging treatment at the same time, retinoids can give you that one-two punch.

My Experience: As soon as I started seeing doctors for my acne, they were throwing retinoids at me left and right. Retinoids are the go-to prescriptions for acne. However, I was always disappointed in their results. It turns out they only improve acne by about 50%, which in my opinion is unacceptable. Who wants to go from 20 zits at a time to 10? If I only had very light acne and wanted slightly less wrinkles and an increased “glow,” retinoids might have been a good option, but for my actual, real acne condition, they felt a bit like a drop in the bucket.

Retinoids are derivatives of vitamin A. As far back as 3000 years ago, Egyptians used vitamin A from rat livers to treat various health problems. In the early 20th century, scientists confirmed the necessity of vitamin A in normal skin health and appearance. And by 1968, chemists began developing synthetic topical vitamin A derivatives, called retinoids, which were relatively safe and reliably improved skin appearance, and reduced acne symptoms.

Scientists first developed the retinoid called tretinoin. However, today there are four major retinoids that doctors prescribe for acne:

Soon after tretinoin hit the market, female patients began reporting changes in the appearance of their skin, noting fewer wrinkles and smoother skin after undergoing retinoid treatment. Following these reports, scientists conducted studies in mice and in humans and concluded that topical retinoids do indeed decrease signs of aging, including sun damage, abnormal pigmentation, and skin growths.1,2

Retinoids reduce acne, on average, by about 50%. However, they also fight the signs of aging through:

Let’s take a closer look at each of these one by one.

The skin consists of layers that work together to create a barrier for the body. The skin barrier is tough but pliable, and is constantly renewing itself in order to keep the barrier strong.

Vitamin A is essential for skin renewal. Retinoids naturally occur in the skin, and the presence of these retinoids affects the skin’s ability to undergo its natural turnover and renewal process, which is especially important to promote a healthy, strong skin barrier after a skin injury or wound.3

Each day that we go outside, the skin’s barrier is exposed to the sun and pelted with ultraviolet (UV) radiation. This exposure can cause the skin to become rough, uneven, and abnormally pigmented.2

Scientists have shown that “retinoids may counteract some deleterious actions of UV radiation…”3 In much the same way that vitamin A promotes natural skin renewal, retinoids promote healing of sun-damaged skin by decreasing wrinkles, improving skin texture, and clearing abnormal pigmentation.

Increase in the amount of collagen

Underneath the skin’s barrier resides tissue full of structural components that support and help maintain the skin barrier. One such protein that makes up this tissue is collagen, and it is crucial in preventing wrinkle formation and smoothing skin texture.

Researchers first identified that the particular retinoid, tretinoin, increased collagen production by 80% in sun-damaged skin. The increase in collagen provides the proper support and structure for the skin’s barrier, which results in smoothing of the skin.5

The Effectiveness of Topical Retinoids Against Skin Aging

Dermatologists often initially prescribe 0.025 – 0.05% strength tretinoin as a topical gel or cream to be applied nightly.

Research shows us that the length of time between 0.05% tretinoin treatment initiation and a reduction in signs of skin aging reduction may be as little as three months, with patients reporting moderate improvements in fine wrinkles. By six months, patients reported a reduction in skin roughness and coarse wrinkling, and after twelve months of tretinoin treatment, scientists found an increase in the amount of collagen present in the skin of patients.5

Generally, after the first twelve months of treatment, the tretinoin concentration is decreased to 0.01%.

Applied as a topical gel or cream, 0.1% tazarotene is generally prescribed by dermatologists to be applied nightly.

Scientists have shown that tazarotene improves a wider variety of aging symptoms than other retinoids.

In another study, scientists compared the effectiveness of tazarotene to that of tretinoin over the course of 24 weeks. They discovered that “there was no therapeutic difference between tazarotene 0.1% cream and tretinoin 0.05% cream after 24 weeks…” However, patients receiving 0.1% tazarotene tended to respond faster to therapy, with scientists observing a larger decrease in the signs of aging at 12 and 20 weeks than with tretinoin 0.05% treatment.4

In another study, researchers looked at whether tazarotene could reduce signs of aging in photodamaged skin (skin aged by sun exposure). They found that applying a 0.1% tazarotene cream to the skin once a day for 24 weeks reduced skin wrinkling, roughness, and hyperpigmentation (dark or red spots on the skin).5

One way in which tazarotene reduced wrinkles is by causing the top layer of the skin to thicken.5,6

In one of these studies, scientists treated patients daily with either a 0.1% or 0.3% adapalene topical gel for one month, followed by application twice daily for nine months. After nine months, scientists observed lightening of sun-damaged areas, a decrease in crusty, thick skin patches called actinic keratosis, and wrinkles.1 The second study examined 40 females applying 0.3% adapalene gel daily for six months. After study completion, the patients reported a 29 – 52% reduction in facial wrinkles.8

One limitation of retinoid therapy is that results of treatment are only visible to patients regularly applying the medication. Once treatment has stopped, a patient’s skin will revert back to its original state over time. Therefore, patients must continually apply retinoids to maintain younger-looking skin.7

Side Effects of Retinoid Treatment

Side effects are often dose-dependent and resolve when patients are treated with lower doses. For example, 90% of patients applying 0.1% tretinoin cream on a daily basis exhibited these side effects. However, patients receiving a 0.025% concentration of tretinoin showed “far fewer adverse effects.”7