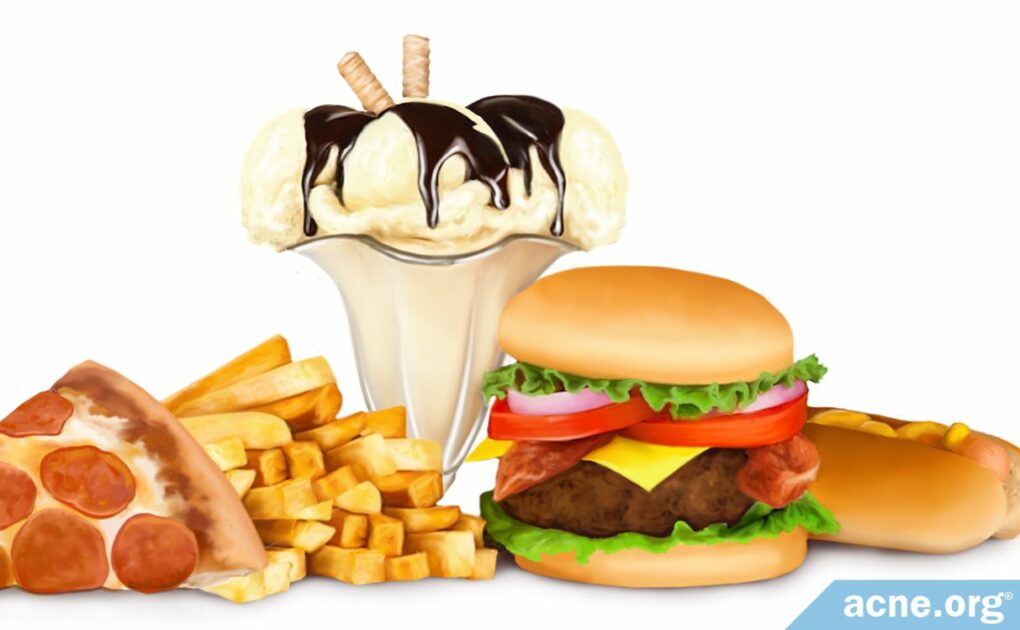 Currently, There Is No Evidence That Fatty or Oily Foods Cause or Worsen Acne

Increased production of skin oil, which is made of different types of fat, contributes to acne. Since skin oil is made of fats, and some foods contain fats, researchers wonder if fatty and oily foods are linked to acne.

The answer is not clear. Current research on the relationship between fatty foods and acne is limited.

Further confounding the topic is the presence of both good and bad fats in foods. Good fats like omega-3s could be beneficial for acne, while bad fats like saturated fats could prove detrimental.

Furthermore, since fatty food contains more calories, it could be the calorie content in fatty food, and not the fat itself in the food, that would lead to an increase in acne symptoms.

The Bottom Line: At this time, there is no conclusive relationship between the amount or type of fat in the diet and acne, so there is no need to stress out about the amount of fat you have in your diet when it comes to acne.

You may have heard someone say before that “fatty food causes acne.” But this sort of blanket statement is off-base for two reasons:

First let’s look at the types of fat in food and why a balance is important.

Two of the most important fats in food are fatty acids called:

In a typical Western diet, it is far more difficult to consume adequate amounts of omega-3 fatty acids than it is to get the omega-6 fatty acids that your body needs.

When too many omega-6 fatty acids are consumed and too few omega-3 fatty acids, inflammation may result. Since acne is primarily an inflammatory disease, this could hypothetically lead to more acne.

In a 2009 Dermato-Endocrinology article, the author stated:

“Epidemiological studies have shown that increasing the intake of omega-3 fatty acids through a diet rich in fish and seafood lowers rates of acne.”1

Research suggests that as the ratio of omega-6 to omega-3 fatty acids increases, inflammation also increases.2

A ratio is the relationship between two items. For example:

As shown in the chart below, the ratio of omega-6 fatty acids to omega-3 fatty acids in the average Western diet is far greater than that in an average non-Western diet.1-3 Moving our diet back toward a non-Western ratio might help reduce bodily inflammation, and thus, acne.

Can Eating Fat Increase Skin Oil Production In the Skin and Lead to More Acne?

Acne lesions form in any one of the millions of pores in our skin. Attached to the sides of these pores are tiny glands called sebaceous glands, whose job is to produce skin oil. This skin oil, called sebum, is comprised of various fats.

More sebum normally means more acne. So, would eating too much fat cause the body to over-produce sebum? The short answer is we don’t know yet, but when we have a closer look there are some interesting clues that may give rise to future studies, and hopefully, answers.

Sebum is made of different types of fat, such as triglycerides, free fatty acids, and cholesterol.

Fatty and oily foods also contain triglycerides, free fatty acids, and cholesterol. One fatty acid in particular, palmitic acid, is of particular interest when we look at how food might affect sebum development. Palmitic acid is present in many foods, including red meat, butter, milk, cheese, and some oils like palm oil, soybean oil, and corn oil.

Palmitic acids – can this fatty acid lead to sebum production?

Sebaceous glands use palmitic acid to form a type of fat that is only found in sebum, called wax esters. This means that the body uses palmitic acid specifically to produce sebum since wax esters are not found elsewhere in the body. This led the researchers to believe that diet probably influences sebum production and, consequently, acne formation.4

However, we must remember that sebum production is a normal process.5 Although scientists know that palmitic acids are used to make wax esters and that wax esters are used to produce sebum, its role in acne formation remains unknown.

In short, we simply do not know at this point whether eating more fatty foods, or even fatty foods high in palmitic acid, will increase sebum production. To know the answer to this, researchers will need to perform a long-term randomized controlled trial (RCT), and this has yet to occur.

Fat is high in calories. One gram of fat contains 9 calories, while one gram of carbohydrate or protein contains only 4 calories.

High-calorie, fatty fast food options, such as hamburgers, fries, and pizza, are easy to obtain and overeat. One study suggests that, on average, a person visiting a fast food restaurant buys a meal containing 827 calories. That one meal makes up almost half of the normal daily calorie intake – 2000 calories for an average adult.

Since fatty foods tend to be high in calories, we need to consider whether the high-calorie content of fatty food contributes to acne rather than the fat in the food itself.7

The number of calories in the diet directly affects the levels of certain substances in the body, such as:

Here’s how it goes:

Eating high-calorie foods can bring about high glucose levels in the blood, often referred to as a blood sugar spike. When this occurs, the body produces more insulin and IGF-1 to bring glucose levels back to normal.

And here’s why it’s a concern:

High levels of insulin and IGF-1 have been linked to increased sebum production. And as we mentioned, more sebum normally means more acne.

In other words, since increased sebum production contributes to acne, high-calorie fatty foods might contribute to acne formation through indirectly increasing insulin and IGF-1.10

Surveys Investigating the Potential Link Between Fatty Foods and Acne

Researchers have conducted questionnaire surveys investigating the potential link between fatty foods and acne. The results of these surveys hint at an association between certain foods, including fatty foods, and acne.

However, unlike randomized controlled trials (RCTs), which can tell researchers if one factor causes another, survey studies only give us a glimpse at a big picture at one point in time. Since surveys are far less reliable than RCTs, we cannot use them to draw a definitive conclusion on fatty food and acne.

Results of the surveys are presented in the chart below.11-14

Based on the lack of any RCTs, evidence linking fat intake to acne formation is weak.15 In order to determine whether there is a relationship between fatty foods and acne, researchers will need to conduct RCTs.16