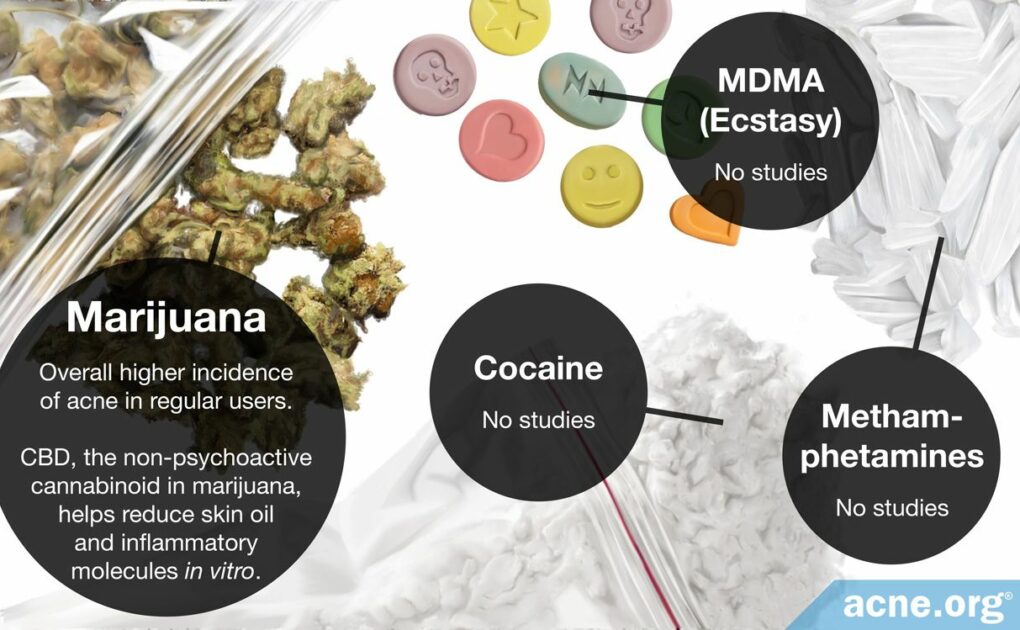 Looking at the Research and Possible Links Between Drugs and Acne

Due to ethical and legal restrictions, researchers have not directly studied the effects of most drugs on acne. This leaves us without the necessary data to draw any firm conclusions on how drugs might affect acne.

However, we do know that most drugs:

And we also know that some drugs (particularly cocaine):

Lastly, one drug in particular, methamphetamines, can lead to:

The Bottom Line: Until we have more evidence, no one can say for sure whether various drugs will worsen acne. But suffice it to say that it is extremely unlikely that any drug will improve acne. The safest bet would be not to do drugs.

Scientists have performed two recent studies on marijuana and acne, but no research specific to other drugs and their effects on acne exists in any peer-reviewed medical journals.

However, we do have research on how drugs affect some other factors that might give us some clues to how they might affect acne:

Let’s look at various drugs one-by-one and see what the research tells us so far.

Studies that have tried to find a link between marijuana use and acne have obtained mixed results. One recent study found that people who regularly use marijuana are more likely to suffer from acne than non-users.1

On the other hand, two lab studies found that one of the components of marijuana suppresses inflammation, which should theoretically reduce acne in marijuana users.2,3 One of these two studies also found that marijuana may reduce the production of skin oil (sebum), which would also help with acne.2

However, human studies investigating the effects of cannabinoids on hormones have been conflicting, with some studies showing lowered levels of androgens, some showing no change, and still others showing increased levels.4,5

In summary, more research is needed before we draw any conclusions on how marijuana affects hormone levels, skin oil (sebum) production, or acne incidence or severity.

Cocaine (might increase inflammation, which could hypothetically worsen acne)

There are no studies that have looked at the direct link between cocaine and acne. However, cocaine can change hormone levels and increase inflammation, which could theoretically result in worsening of acne.

Studies on cocaine show changes in testosterone and estrogen levels in humans and animals during and after administration.5 Whenever we see changes in hormone levels, this is cause for concern when it comes to acne.

More specifically, and more concerningly, human trials have shown increases in a hormone called luteinizing hormone (LH) in both male and female human subjects during cocaine administration.7,8 Luteinizing hormone is a type of hormone called an androgen, which are male hormones present in both males and females. Increased levels of androgens tend to lead to more acne, so this is potential cause for concern when it comes to cocaine’s potential to increase acne.

Animal trials have shown conflicting results. Chronic cocaine use was shown to disrupt the menstrual cycle in female primates.6 How this would potentially affect acne is unknown. In one study on rats, testosterone levels and testes size was markedly lower after four weeks of cocaine use.9 Lower testosterone normally means lower acne symptoms, but this is just one study performed on rats so we cannot draw any conclusions.

Two additional studies in humans have found that cocaine might indirectly increase the amount of the stress hormone cortisol in the body and can also increase inflammation.10,11 Both of these effects of cocaine could theoretically contribute to making acne worse.

There are no studies that have looked at the direct link between MDMA (ecstacy) and acne. However, some evidence points toward possible changes in male hormone (androgen) and stress hormone levels following MDMA administration in animals and humans. The studies are small and results conflict.

In one study on rats, scientists found lowered amounts of testosterone and also lowered amounts of another reproductive hormone GnRH in rats seven days after administration of ecstasy (MDMA).12 One small human study showed a huge spike in cortisol (800%) during MDMA usage with testosterone also increasing by 75%.13 Another study published in 2014 measured hormone levels in sixteen healthy men and women after administration of MDMA and found that while cortisol levels increased by 166% twenty-four hours after taking MDMA, testosterone levels did not change.14

Since the evidence thus far on MDMA and hormones is mixed, and we cannot extrapolate results from animal studies to humans, we do not know at this point whether MDMA negatively or positively affects androgen production. However, considering that ecstasy may dramatically raise cortisol levels, this could possibly be a concern when it comes to acne development.

Methamphetamines (leads to uncontrollable skin picking, which can worsen acne and cause scarring)

Although anecdotal evidence suggests that methamphetamine users tend to develop acne, no research has been done on this topic. Methamphetamine users are also known to pick at their skin uncontrollably. Picking can cause physical irritation, which can lead to acne development. Picking is also a major contributor to scarring.

A study published in 2010 found that methamphetamines also increase stress in the body, which is linked to acne.15

In addition, this study found that methamphetamine reduces the ability of the immune system to fight certain bacteria. Since bacteria can also worsen acne, this might mean that people who use methamphetamine are more likely to develop acne.16 However, these are only speculations at this point.

Other Considerations Regarding Drugs and Acne

Stress: Drug use can cause both mental and physical stress, and stress is intimately connected with acne symptoms in many people.17 Overuse of drugs can lead to paranoia, anxiety, and depression. Drug use can also put stress on the body. Bodily stress is an often overlooked factor in acne formation.

Irritation: Some drugs, especially methamphetamines, can lead to the uncontrollable need to pick at one’s skin. Picking, or any irritation for that matter, is one of the biggest factors in acne development, and should not be underestimated.