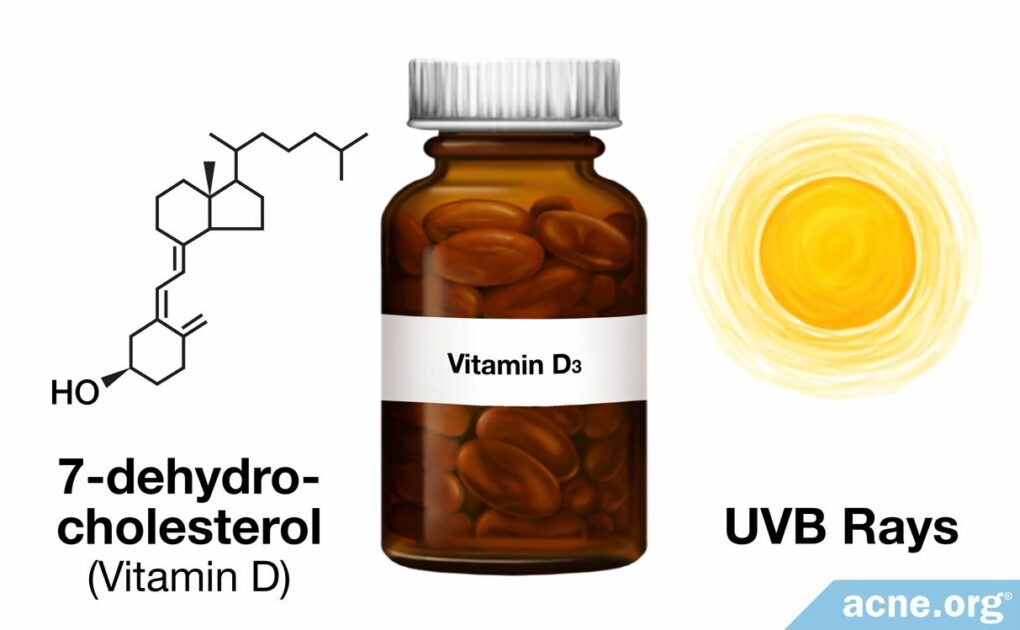 Perhaps. Vitamin D is important for maintenance of healthy skin and might have a role in the treatment of acne.

There is little direct research regarding the treatment of acne with vitamin D. There is, however, much evidence that vitamin D is crucial to skin health in general, and there is indirect evidence suggesting that it might play a role in treating acne.

Lending even more evidence to the possible connection between vitamin D and acne, researchers have now published several studies that show us that people with acne may have lower vitamin D levels than those without acne.

Vitamin D serves several functions in the skin, including:

Ensuring Your Levels are Adequate: We get vitamin D primarily through sun exposure. If you are light-skinned, approximately 20 minutes of unprotected exposure per day will ensure you get the vitamin D you need. Darker skin requires more, with people who have the darkest skin requiring upwards of 2 hours per day. If you are not getting regular sun exposure, ask your doctor for a simple vitamin D blood test, and if your levels are low, widely-available oral vitamin D supplements can bump you back up to healthy levels.

Even though we don’t know yet exactly how vitamin D impacts acne, we do know that it is vitally important to the health of the skin.1,2

Our bodies produce vitamin D when the skin is exposed to sunlight. After it is produced in the skin, it then goes on to bind to all other skin cells as well as all of the body’s immune cells.

Vitamin D has various beneficial effects, depending on which type of cell it binds to, many of which are potentially directly related to acne, including:

Let’s have a look at each of these effects now 1 by 1 and see how an argument can be made that vitamin D may be important when it comes to acne.

Vitamin D has antibacterial effects, which suggests that it might have potential for treating acne.

It acts on bacteria directly, by slowing down bacterial growth or killing the bacteria entirely, and indirectly, by helping the immune system produce molecules called antimicrobial peptides that kill bacteria. As noted in a 2011 article in Dermato-Endocrinology, “In the presence of…[vitamin D], [various types of bacteria] were killed or demonstrated marked growth inhibition.”3

The same 2011 article in Dermato-Endocrinology noted that “[v]itamin D and its analogues via these [antimicrobial] mechanisms are playing an increasing role in the management of atopic dermatitis, psoriasis, vitiligo, acne and rosacea.”3

Even though this article didn’t look directly at the effects of vitamin D on acne bacteria (C. acnes), the fact that vitamin D has antimicrobial effects on a variety of different bacteria, and on other skin diseases, points to the possibility that it might have similar effects on C. acnes, which could lead to less severe acne.

As scientists have researched acne over the decades, it has become clear that at its root, acne is an inflammatory disease.

How does it lessen inflammation? When vitamin D binds to immune cells, it helps to calm the immune system by decreasing the production of molecules within immune cells that cause skin inflammation, called macrophages. It does the same thing when it binds to skin oil cells.1,4,5

Wound healing is an important component of acne treatment because the process of healing acne lesions is similar to healing other types of wounds.

Vitamin D plays an important role in the wound healing process by helping drive the development of wound-repairing cells. It was found that without vitamin D, the process of developing new cells to replace damaged cells slows down, and thus wound healing is impaired.6,7 Additionally, scientists have found that the antimicrobial peptides that vitamin D causes immune cells to produce can further help with wound repair.3 Finally, vitamin D may be crucial to the formation of the skin’s barrier. In other words, it may help bring the skin back to normal after trauma.8

Since vitamin D plays a crucial role in healing wounds, it is reasonable to infer that vitamin D might help to heal acne lesions in the same way that it helps to heal other types of wounds.

Research evidence is mounting that people with acne, especially those with severe acne, tend to have lower levels of vitamin D compared to people without acne.9-11 One small study also found that oral vitamin D supplements might improve acne in people with a vitamin D deficiency.10

Isotretinoin, often referred to by its original brand name, Accutane®, is a common treatment for severe acne.

In a 2011 study in Dermatologic Therapy, researchers investigated the effect of isotretinoin treatment on vitamin D levels. This study, which looked at 50 acne patients who were treated with isotretinoin for three months, found that “vitamin D…levels decreased significantly.”13 This result suggests that people taking isotretinoin might be wise to take a vitamin D supplement in order to prevent vitamin D deficiency.

How to Check Your Vitamin D Level

You can ask your doctor for a routine and simple blood test to determine if you have adequate vitamin D levels. This is especially important if you are at risk for vitamin D deficiency due to lack of sun exposure or other disorders that interfere with vitamin D absorption. If your vitamin D levels are low, taking an oral supplement might be a good idea. Check with your doctor to determine an appropriate dosage for you, but 800 – 1000 IU (international units) per day of vitamin D is a common guideline.