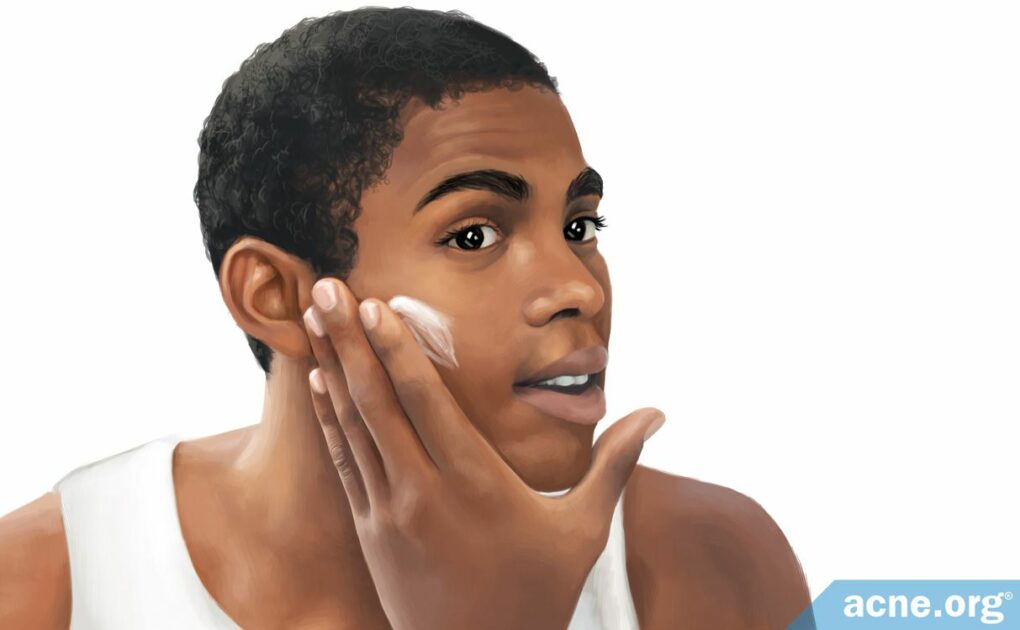 Probably, Though Exactly How It Helps Is Unclear. Be Sure to Stay Gentle.

Therefore, research shows us that it is a good idea to lightly massage topical acne medications into the skin, but this should be done with a featherlight touch because physical irritation of the skin can make acne worse. A good way to think about it is that you want to “move the medication around” until it is absorbed. Don’t “press it into the skin” or give your skin a vigorous massage. Just move the medication around until it’s absorbed.

When we apply medicated creams, gels, or ointments to the skin, many of us instinctively massage them in. Ever wonder why we do that, and whether it makes any difference to how well the treatment works? Fortunately for us, scientists have wondered! Their experiments show that rubbing or massaging the skin right before or after applying a topical treatment most likely helps with absorption–and the better the medication penetrates the skin, the more effective it will be.

Exactly how rubbing or massaging the skin improves the absorption of medication is still unclear, although scientists have a few ideas. If you are curious to know more about their experiments, let’s dive into the research!

Four studies have found that rubbing or massaging the skin seems to improve the penetration of medications into the skin. We should note that all these studies experimented on human or animal skin samples in the lab that were no longer attached to a human or an animal, and not on the skin of living patients. In other words, we cannot be absolutely sure that things would work exactly the same way in real people.

Study #1: Rubbing an acne medication in with a gloved finger improves absorption

In Experiment 1, less salicylic acid remained on the skin surface and more was found in every skin layer compared to Experiment 2. In other words, rubbing acne medication in with a finger results in better absorption than simply placing the medication on top of the skin. The scientists wrote, “The present study is…the first one to investigate the effect of rubbing a topical acne medication…on [the] skin surface on drug penetration.”1

Study #2: Rubbing an anti-inflammatory medication into the skin improves its absorption

The second study looked at whether an anti-inflammatory medication called diclofenac penetrates the skin better when rubbed in. The researchers applied diclofenac gel to a human skin sample for 45 seconds with or without rubbing. They found that rubbing improved absorption of the medication five-fold. The scientists also observed that without rubbing, the medicated gel tended to accumulate in the superficial layers of the skin, whereas after rubbing, it passed deeper into the skin. The researchers wrote, “[A]pplication of diclofenac…with a 45 s rubbing tended to result in higher accumulation in the stripped skin…without rubbing it tended to remain in the superficial skin layers.”2

Study #3: Massaging the skin for 30 seconds before applying an ointment improves absorption

The third study tested whether massaging the skin before applying a medicated ointment improved absorption of the medication. The researchers lightly massaged a rat skin sample for 30 seconds and then applied an ointment containing triamcinolone acetonide, a steroid medication used for treating skin conditions like allergic rash. They measured how much ointment permeated this skin sample and compared it to another sample where ointment was applied without massage. The researchers found that massaging the skin increased absorption of the medication nine-fold over 24 hours.3

Study #4: Applying pressure to the skin improves absorption of a topical medication

After placing the caffeine on top of a skin sample, the researchers applied pressure to the skin for 30 minutes. We should note that this is a very long time, much longer than most people rub the skin when applying a medication. The researchers found that the pressure almost doubled the absorption of caffeine into the skin.4

Summing up the results of these four studies, it looks like rubbing or massaging the skin before or after applying a topical medication significantly improves absorption. The studies found that the skin absorbs medications as much as 2-9 times better when rubbed.

However, one conflicting study found that rubbing made no difference to how well the skin absorbed a topical medication. Unlike the other four studies, which tested skin samples, this was a very rigorous clinical trial conducted in patients. Normally, that would mean we should trust the results of this study more than the others. However, the researchers did not directly measure absorption of the drug into the skin. Instead, they looked at how much the patients’ improved after applying a medication with or without rubbing it into the skin. In other words, they did not directly measure what we are most interested in, so we cannot give the results of this study too much weight.

This study compared absorption of a medicated spray with or without rubbing into the skin. Fifty patients with eczema on the arms or legs applied a spray containing a topical steroid medication to the affected limbs three times a day for two weeks. However, on one side of the body, they rubbed the spray into the skin, while on the other side, they let the spray absorb on its own. After two weeks, the researchers compared eczema symptoms on the two sides of the body. They found that symptoms on both sides had improved equally. In other words, rubbing the skin did not make the treatment more effective. The researchers wrote, “Both the no-rub and rub techniques resulted in significant clinical…improvement of mild eczema…Moreover, there was no difference in [symptoms] between the no-rub and rub techniques.”5

Again, we should keep in mind that the researchers only measured improvement in symptoms, not how much drug penetrated the skin. In other words, it is possible that rubbing did increase drug absorption somewhat, but not enough to further improve the patients’ symptoms.

How Rubbing or Massaging the Skin May Improve Absorption

Scientists speculate that rubbing or massaging the skin may improve absorption of medication either by increasing the temperature of the skin, improving blood flow to the skin, and/or temporarily disrupting the skin surface so that substances can more easily penetrate it. If you are curious to know more about how this might work, expand the section below.

Research suggests that lightly rubbing the skin probably does improve absorption of topical medications. Theoretically, the more medication absorbed, the stronger the medicinal effect. Therefore, it is a good idea to gently rub topical medication into the skin, moving the medication around until the skin absorbs it. However, remember to use a featherlight touch and avoid pressing on the skin, as this can cause irritation and make your acne worse.