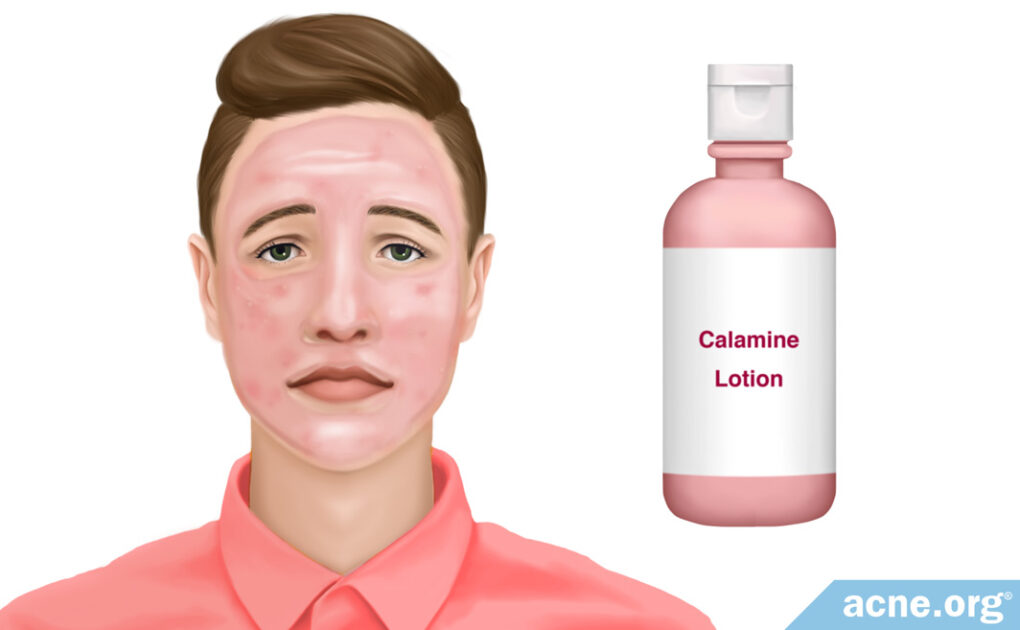 The Zinc Oxide in Calamine Lotion May Help

Calamine lotion is a topical skincare product best known for its ability to reduce the itchiness, redness, and swelling from skin conditions like poison ivy.

It is a simple product composed of:

While scientists have not studied calamine lotion on acne directly, the zinc oxide in calamine lotion may have antibacterial, anti-inflammatory, and hormone balancing properties, which could theoretically help acne to a small degree, at least in the short term. But don’t expect noticeable results. Zinc oxide on its own has not been shown to be an impressive acne treatment.

The Bottom Line: While calamine lotion may help reduce short-term redness, it is unlikely to provide measurable relief from acne, even mild acne.

Some members of the Acne.org community have reported using calamine lotion to treat their acne.

There are no studies that look directly at the effects of calamine lotion on acne. However, scientists proposed three hypotheses that explain how zinc oxide may counteract skin inflammation and acne.

We have very little clinical evidence on how well topical zinc oxide works on acne. Just one study that was performed in 2000 and published in the journal Clinical and Experimental Dermatology investigated the effect of the main calamine lotion ingredient, zinc oxide, on acne. In the experiment, a lotion containing both zinc oxide and a separate antiseptic called chloroxylenol, showed good results, but the researchers believe the chloroxylenol likely provided much of the benefit.6 In other words, we currently have no evidence that zinc oxide by itself is effective for treating acne.

Acne is, in part, a bacterial disease, and a bacteria called C. acnes is normally found growing within clogged skin pores. C. acnes is thought to lead toward a worsening of inflammation within acne lesions.

So it makes sense that we might learn a bit more about the potential of zinc oxide from how it kills C. acnes bacteria. Studies are preliminary and have only been performed in the lab and not in human skin, so we cannot confidently extrapolate to human skin, but from what the studies show us, zinc oxide, particularly smaller particles – which calamine lotion usually does not contain – may be able to help slow the growth of C. acnes bacteria. Can the larger particles in calamine lotion work as well? More research, and preferably research on human skin, using larger particles of zinc oxide would be needed for us to answer this question more confidently.

Scientists have performed three studies thus far to investigate the antibacterial effect of zinc oxide on C. acnes. In these studies, researchers grew C. acnes bacteria in the lab and then added zinc oxide to see whether this would slow the growth of the bacteria. They found that zinc oxide was moderately successful in slowing the growth of bacteria in the lab.3,4,7 However, it remains to be seen whether a lotion containing zinc oxide would likewise slow down C. acnes growth on human skin.

What Conclusions Can We Make?

Unfortunately, we can’t draw a firm conclusion on the antibacterial power of topically-applied zinc oxide from these studies because the studies are only done in the lab, and not on human skin. But still, they show that zinc oxide does appear to be at least somewhat antibacterial. This, combined with the successful use of calamine lotion for decades to reduce the redness and swelling of skin conditions, means it could potentially help reduce the short-term redness of acne, and, in a best case scenario, also slow the growth of acne bacteria.

However, regardless of whether it works to some degree, it most likely will not clear acne in a measurable way. If you do not suffer much from acne, it probably won’t hurt to try calamine lotion, but if you suffer from acne to a measurable degree, particularly if your acne is scarring, it is best to look into other, proven treatments.