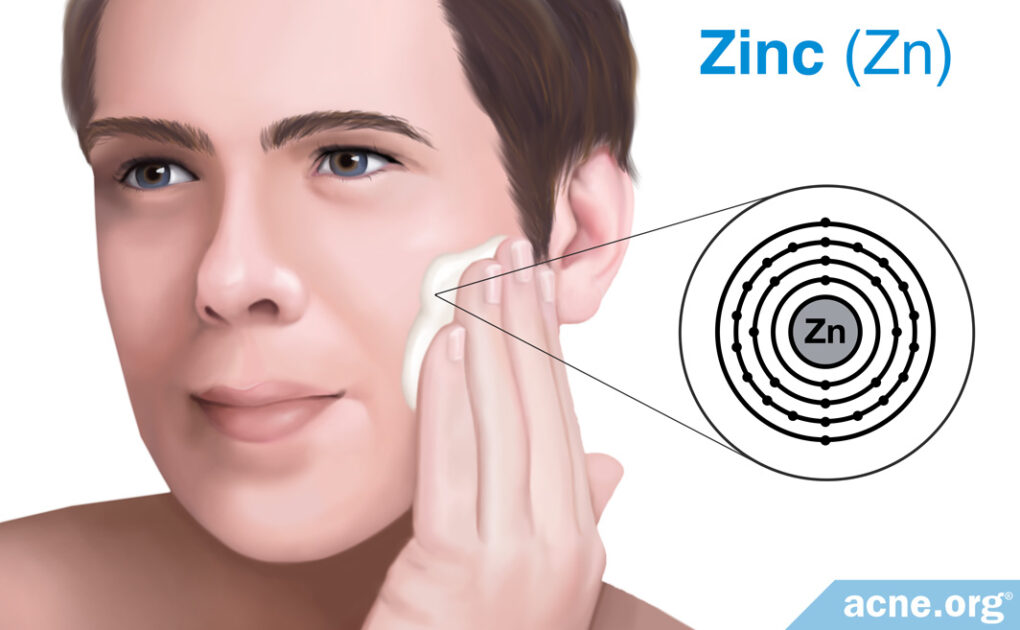 From the research we have thus far, topical zinc by itself is unlikely to clear acne. But researchers have studied only a small number of zinc compounds for their effectiveness in treating acne, so more research is needed to identify what zinc compound, if any, may prove beneficial in treating or preventing acne.

Zinc is an essential micronutrient in our bodies. The human body contains around 2-3 g of zinc, which equates to about half of a teaspoon, most of which is found in muscle and bone. However, zinc is important for all parts of the body, including the skin.

In the skin, zinc deficiency may lead to the development of acne as well as some other skin disorders. This has led scientists to wonder whether topical zinc might be useful in the treatment of acne. Results of studies so far show that zinc is less than impressive when it comes to combatting acne. However, it may be beneficial in combination with other acne medications.1,2

You may be most familiar with topical zinc when it comes to sunscreens. Picture the sunscreens that lifeguards sometimes wear that are bright white on their nose. That’s zinc oxide. Left to its own accord, zinc does not penetrate the skin. This inability makes zinc an effective ingredient in sunscreen since it sits on top of the skin where it absorbs and reflects the sun’s rays.

However, for any compound to treat acne or other skin diseases, it needs to absorb into the skin. Scientists have developed new zinc compounds that do just that, including:

The differences in the type of zinc can cause slight changes in how the zinc compound acts on the skin.3

What the Research Says

Two studies show that topical zinc (zinc acetate & zinc octoate), combined with the topical antibiotic, erythromycin, provides a modest improvement in acne.4,5 However, the topical antibiotic may have been solely responsible for the improvement in acne, and because the researchers did not test zinc on its own, we can’t say what part zinc may have played.

Topical Zinc on Its Own = No Evidence of Acne Improvement

Certain forms of zinc might have medicinal benefits for acne when used on their own, but we have no research that shows that any zinc compound on its own will clear acne.

So far, we know that:

Researchers have performed two studies examining whether topical zinc sulfate is effective at improving acne when applied by itself instead or in combination with other substances, like erythromycin or other antibiotics. This research found that zinc sulfate on its own is not an effective acne treatment.

To sum up, we don’t know which, if any, zinc compounds might improve acne when used on their own. Most likely, if zinc does have some medicinal benefit for acne, any improvement in symptoms would be small.

Although the research thus far has not produced impressive results when it comes to zinc and acne, zinc remains an interesting area of study because it is such an important nutrient in our bodies, including in our skin.

To that end, scientists have performed several studies examining the effect of topical zinc along with erythromycin on two of the most important factors that lead to acne:

It appears that zinc might be able to help with both of these factors. Let’s have a look at the research.

How do we know if it was the zinc or the topical antibiotic that reduced skin oil production? Luckily, because of the way one of the studies was designed, the researchers were able to conclude that zinc itself was likely a contributing factor to the skin oil reducing activity.

Researchers have performed three studies examining the effect of topical zinc compounds on acne bacteria. Two of these studies found that topical zinc (zinc acetate) + the topical antibiotic, erythromycin, was effective at reducing the number of acne bacteria in the skin of acne patients. Whether it was the zinc of the topical antibiotic that was primarily responsible for the reduction in bacteria is unknown.

One of the studies found also that zinc (zinc ascorbate), when put into a petri dish with acne bacteria, could limit the growth of the bacteria.

In short, topical zinc, on its own, has not yet been shown to be an effective treatment for acne, but researchers continue to develop and test new zinc compounds. Since zinc may reduce skin oil production and acne bacteria growth, there just might come a time when topical zinc has a place in acne treatment.